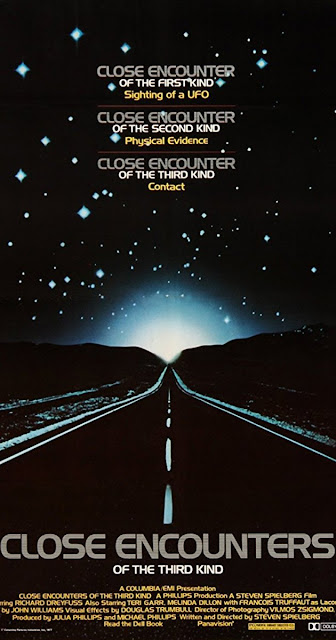 I’ve changed my mind about Close Encounters of the Third Kind (1977) several times over the years, proving once again that consistency is not my strong suit. When I first saw it, nestled cosily in a shiny new multiplex, I thought it was pure hokum. Its car chases, toothless hillbillies and mashed potato mountains made the film seem like Smokey and the Bandit Meet the Flying Saucers. It didn’t help that the aliens’ mother ship - a spectacular reveal intended to make audiences gasp - looked like that tacky, oversized chandelier hanging over Aunt Elisabeth’s dining table, under which I had spent many uncomfortable Thanksgiving dinners as its dagger-like crystals swung precariously over my head.

Still, despite my complaints, there was something about the movie that haunted me. Not doubt because it was a story I really wanted to believe. I’d like to think that if there are intergalactic craft buzzing about the earth, and if one day they should decide to make themselves known to us, that they would be a kindly, peaceful, emotionally stable lot that would happily take humanity under their wing, or whatever alien appendage would be appropriate, and show us the way forward. Now that’s something we could really use.

I’ve encountered, closely (stop it!) the film a few more times over the past forty years: on TV, on home video and I even paid to see the ill-advised 1980 Special Edition, which promised to show us the inside of the alien spaceship (spoiler: it looked like an enormous, austerely designed Norwegian disco). And I’m happy to announce that I’ve not only made peace with the movie, I now revel in it, warts and all. Forget about the acting, which ranges from serviceable to embarrassing - Richard Dreyfuss could certainly chew some scenery in those days - and ignore its poorly developed female characters. Hey, it’s a Spielberg, his films don’t do interesting women. A few years ago, he had the great Sally Field playing Mary Todd Lincoln, one of the most psychologically complex women in American history, and turned her into a clingy hausfrau.

But I digress. Close Encounters is a film to be appreciated for its sheer grand spectacle. It’s a film beyond the scale of humanity, and therefore its human elements are simply in the way. Its special effects, state of the art in 1977, still hold up and seem strangely subtle and tasteful compared to today's full throttle CGI fests. The lighting of the late, great Vilmos Zsigmond is simply a marvel here, and imbues each scene with a palpable sense of the otherworldly. And John Williams’ score, complete with that unforgettable five note major scale ditty, provides an aural grandeur worthy of the film’s extraordinary visuals. Forty years later,  Close Encounters of the Third Kind remains a flawed masterpiece, but even flawed masterpieces can contain important messages. The film impresses upon us mankind’s true, rather insignificant, place in the cosmos. And these days, there are lots of puffed up, self-righteous folks running around who need to be taken down a couple of pegs.

Thanks. I did not re-see the film for many years but remember it as a spectacular and mysterious search for something far behind the limits of our daily lives. Very enjoyable. I love the early Spielberg films, which changed the course of Hollywood in my opinion. To go to the cinema became an exciting event again. You're right about his female characters, but don't you think Whoopie Goldberg in The Colour Purple is the exception on the rule?