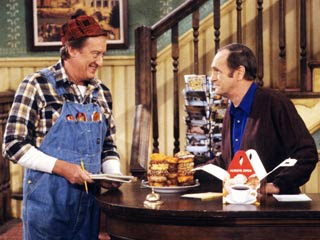 RFD TV is one of those obscure channels you probably don’t get unless you have satellite television. It started back in the 1990s showing cattle auctions. Seriously, home video footage of cows standing around in a muddy pasture in the Midwest while an auctioneer, nice and warm in a studio somewhere, motormouthed in the background. It was a bovine version of Barrett-Jackson. I guess ranchers phoned in their bids or something -- it was never made clear quite how it worked -- but eventually the channel branched out to shows on horsemanship, campfire cooking and live performances by Polka bands.


Well with cattle prices through the roof in recent years -- although farmers still claim they’re going broke -- RFD TV has squirreled away enough cash to start a new channel called FamilyNet. Aimed at the more upscale, sophisticated sodbuster, FamilyNet often resembles an agribusiness version of CNBC, with detailed reports on the effects of weather patterns, pork belly contracts and so forth. FamilyNet also features programs about antique tractors, Country Music personalities and a hunting show with a religious theme. 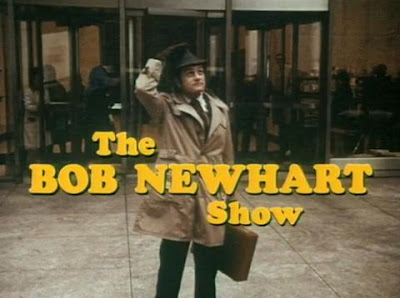 Prime time is devoted to sitcoms from the 70s and 80s; basically stuff that TVLand stopped running years ago. FamilyNet’s programming includes episodes of Bob Newhart’s two popular CBS shows back-to-back and, unsurprisingly, it’s the most consistently entertaining hour on television. First we have The Bob Newhart Show which originally ran from 1972 to 1978, followed by an episode of Newhart which was even more successful, airing from 1982 to 1990. While each show reflects the culture and attitudes of its times, there are definite similarities in formula and approach and, in their own way, each show utilizes the low key star’s unique comedic abilities to the fullest.

In the science of comedy, Bob Newhart is that rarest of beasts: he’s funniest when he’s the straight man. And to that end, the producers of his TV shows smartly surrounded Newhart with oddball characters to which he could react with his patented befuddled politeness. In The Bob Newhart Show, psychologist Bob Hartley had to deal with an array of eccentrics in his group therapy sessions, and those interactions are like the sacred scrolls of comedic timing. Of course, that was when producers still cared about such things and actors had the chops to pull it off. Today, it’s much easier to just be cool and lackadaisical and ironic (see Silver Linings Playbook) and simply call it comedy. 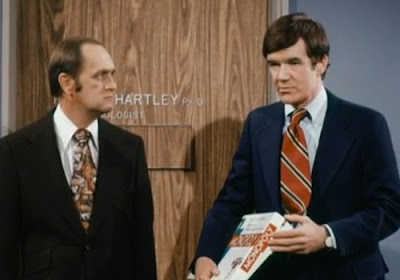 Case in point, Jack Riley’s remarkable turn as the grim-souled patient Elliot Carlin. Carlin evoked such deep seated anger even Dr. Hartley seemed a little afraid of him. Yet through Riley’s tremendous control and lyrical ear, everything that came out of the man’s mouth was hilarious. Carlin’s antagonistic banter with a fellow patient, the wimpy Mr. Peterson (John Fiedler) produced comedy gold as well. On one episode, Mr. Carlin has to leave early from a group session and Dr. Hartley asks those in attendance for advice on how to proceed, to which Fiedler responds in his famous squeaky voice, “I think we should kill him.” Now there’s nothing funny about that line on paper --in today’s culture, it’s kind of repulsive and sick-- but the combination of Fiedler’s suppressed frustration and Newhart’s stunned reaction make it a bit for the ages. 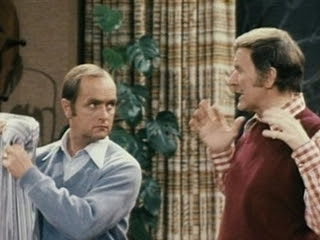 The Bob Newhart Show reflected the swinging 70s in a number of ways. Virtually all the regular characters were unmarried, happily part of the dating scene and not particularly interested in settling down anytime soon. Bob and Emily (Suzanne Pleshette) lived far from the suburban family ideal, with no kids -- and no apparent plans to have any --in a high rise Lakeshore Drive apartment. Bob’s goofy neighbor Howard (Bill Daly), ironically an airline navigator, was a meek, perpetually lost soul who always seemed to have an apartment full of leggy flight attendants. And then there are the clothes, which are nothing short of a hoot. Each decade has its fashion faux pas; the 70s only more so. Maybe one reason we aging boomers have such high incidence of back trouble is we spent our formative years lugging around massive lapels and humongous neckties. All that fabric takes a toll on the skeletal system. 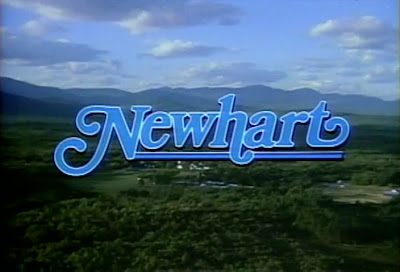 Newhart finds Bob as Dick Loudon, proprietor of a Vermont country inn, local talk show host and best selling author of how-to books. Yes, they gave him three jobs, all rife with comic possibilities. The show’s original design was to be an American-ized Fawlty Towers, and the first season struggled to make that formula work. Fortunately, TV programmers were more patient in those days and the show finally hit its stride after a couple years of grasping at straws.

The writers finally hit upon the right combination of eccentrics and the show eventually became a primer for ensemble comedy. Julia Duffy’s Stephanie, a former debutante now reduced to scullery maid due to a tiff with her Daddy, was the perfect fish out of water, retaining the pampered preppie mindset despite her menial chores. Her boyfriend and Dick’s TV producer Michael (Peter Scolari) took glib shallowness to impressive levels. But, as someone who worked in the TV business during this era, I must say Scolari’s self indulgent preening was not really that far from the norm, and he clearly based his character on real life colleagues. 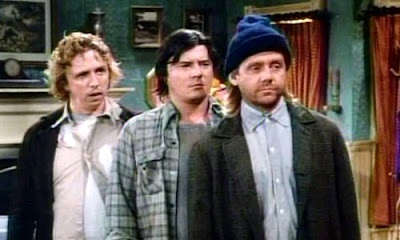 However the show’s crowning achievement was the creation of Larry, Darryl and Darryl. Played by William Sanderson, Tony Papenfuss and John Vlodstad, this trio of simple backwoodsmen captured the nation’s comic imagination, and pushed Newhart to new heights. Like Kramer on Seinfeld, their popularity grew until they received a show-stopping ovation from the studio audience whenever they appeared. But unlike Kramer, they never became parodies of themselves, retaining the rough-hewn innocence that made them stars in the first place. William Sanderson is a superb character actor, with his talent on display in projects as far ranging as Blade Runner and Deadwood. On Newhart, with a subtle neck scratch and a few drawled bon mots, he was able to strike a comedy bulls-eye and illicit empathy without any apparent effort. WIlliam Sanderson’s Larry is that rare combination of talent and role that surpasses the sum of its parts, and enters the realm of true acting alchemy. 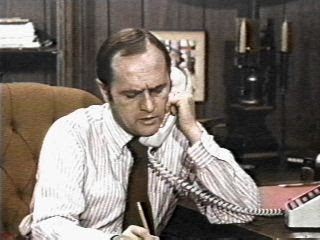 Let’s not forget Bob Newhart; the unassuming master and the gentle glue that held all this madness together. In the 1960s, before these TV shows came along, Newhart had achieved his own astonishing miracles, with two albums of comedy routines that topped the Billboard charts. Not just the comedy charts mind you, ALL the charts. He outsold such musical talents as Elvis and The Beatles; a feat that remains unmatched by a comedy recording. His early routines consisted mainly of brilliantly executed one-sided phone calls, and his TV scripts featured this ability as often as possible. There has never been a better phone actor than Bob Newhart, and he parlayed those confused stammers and thought filled pauses into a marvelous television legacy. Thank goodness people didn’t text back then or we might have never heard of Bob Newhart.

I LOVE Bob Newhart. Both his shows are goldmines, but it's been too long since I've seen one. The final show of Newhart had me literally rolling on the floor laughing.

Here in Kansas, RFD TV and FamilyNet would be very popular. I'll have to ask around if anyone has it. I don't have cable or satellite. Not worth the money to us.