The Lives of Others Turns 10 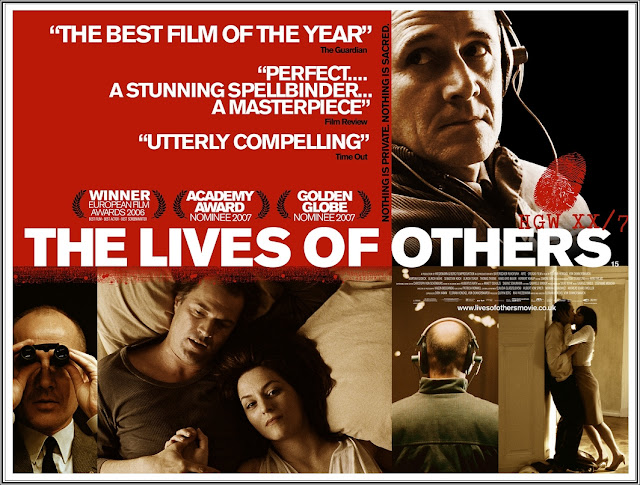 Although it’s rife with spooks, secrets and surveillance, 2006’s Best Foreign Film Oscar winner The Lives of Others is not so much a spy thriller as a spy meditation. Directed with appropriately gloomy atmospherics by Florian Henckel von Donnersmarck - my favorite Germanic name since Carl Ditters von Dittersdorf - every sprocket hole of the film oozes with the oppression and paranoia that pervaded communist East Germany in the 1980s. Of course, the citizenry had good reason to be paranoid, as the state’s fanatical secret police, known as the Stasi, left no stone unturned in search of possible traitors and subversives.

But the Stasi’s biggest concern was East Berlin’s artistic community, and the possibility that one of these sketchy bohemians would create an unflattering portrait of life in the GDR, tossing an embarrassing wrench into the state’s propaganda machine. Toward that end, a lifer Stasi agent named Wiesler (Ulrich Mühe) decides to wiretap the apartment of a celebrated playwright (Sebastian Koch) and his actress girlfriend (über-sexy Martina Gedeck). As Wieser huddles in a dark room surrounded by tape recorders and microphones, he listens in on the couple’s tender and tempestuous moments, and has a surprising reaction. Their kindness and basic human decency strike a strong contrast to the thick-necked cruelty of his ambitious fellow agents, and Wiesler finds himself becoming more of a protector than a prosecutor to the beleaguered couple.

While the The Lives of Others was a boon to the careers of Koch and Gedeck, Ulrich Mühe’s sad eyes and melancholy demeanor dominate the film. It was a role that resonated deeply with him. Decades earlier as a struggling young actor, he had briefly been the subject of Stasi surveillance after his angry ex-wife denounced him to the authorities. Little known outside of Germany, save for a few early Michael Haneke films, Ulrich Mühe spent most of his long career in relative obscurity, and The Lives of Others seemed like his ticket to international stardom. Alas it was not to be, as Ulrich Mühe was hiding a secret of his own. Just hours after the Oscar ceremony, he flew back to Germany to undergo surgery for stomach cancer, and died four months later. The Lives of Others stands as a superb tribute to the quiet brilliance of Ulrich Mühe; a talent taken from us way too soon.

What a great movie. I didn't realize he'd died.

I watched this and The Conversation just a few weeks apart and came to the conclusion that people should mind their own business!