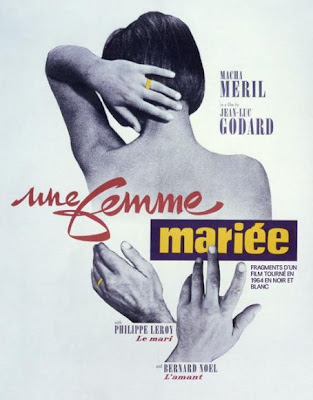 Une Femme Mariée is an early Godard essay on the institution of marriage in a pre-feminist age. Lively and surprisingly entertaining, the film examines the distorting effects of bourgeois priorities on young women’s brains, burdens and boobs – mostly boobs. The film clearly spells out the differences between marital companionship and sexual fulfillment, and makes an interesting case that female infidelity in 1964 stemmed more from a thirst for power than physical yearning. 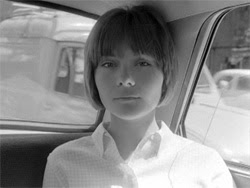 Macha Meril stars as Charlotte, a peppy young bride from the shiny new Parisian suburbs. Married to Pierre (Phillipe Leroy), a chiseled airline pilot several years her senior, Charlotte’s life is a middle class ideal, filled with luncheons and shopping trips to fashionable boutiques, while her saucy retainer Madame Celine (Ruth Maiden) handles the household drudgery. But Charlotte’s daytrips into Paris have a secret side, and a few afternoons a week she goes to the apartment of an actor named Robert (Bernard Noel) for a furtive roll in the hay. 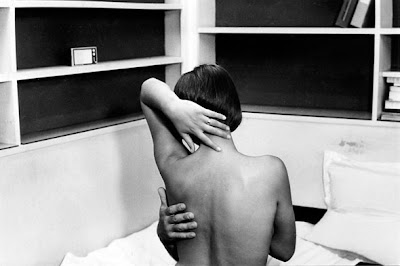 But don’t get the idea that Une Femme Mariée is simply a reforging of Madame Bovary with kicky 60s fashions. This is a Godard film, and part of its pleasure is the directors’ total disregard for the conventions of bodice-ripping narrative. The film begins with a series of tight shots of body parts; stark compositions that walk the fine edge between high art and pretension. As the film settles into a conversational flow, we see how smitten Robert is with his married consort, as he constantly seeks reassurance that Charlotte does indeed plan to leave her husband. 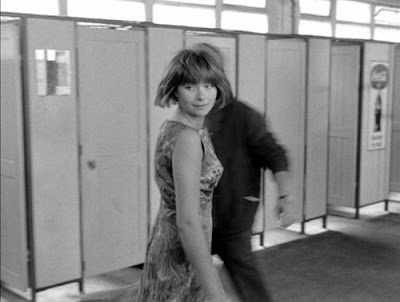 Charlotte eventually returns to her suburban digs, where she puts her pre-school son (Christophe Boursellier) to bed, and prepares a dinner party for her husband and a guest (filmmaker Roger Leenhardt). Godard does some interesting things with this sequence, as Pierre and his guest – both WWII veterans – discuss some of the horrors they’ve witnessed in hushed, reverential tones. Charlotte attempts to follow and contribute to the conversation, but it’s clear the men are discussing a darkly vile and savage world, completely beyond her experience. 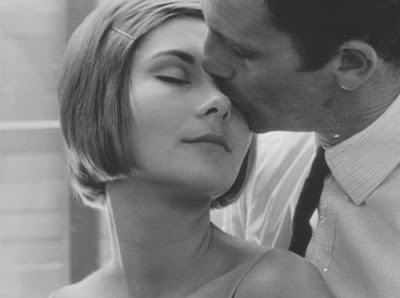 Charlotte’s vision of life is shaped by fashion magazines and her larky fling with Robert, and the dinner party set piece establishes her lack of empathy and perception of any reality beyond her own eyeballs. Godard finds subtle and clever methods of drawing contrasts between Charlotte’s lovers. Robert breathlessly clings to Charlotte’s every word, while Pierre treats his wife with gentleness and respect, but isn’t particularly interested in anything she has to say. Pierre has the quiet demeanor of one who calmly bears solemn responsibilities, while Robert is all irritable passion. 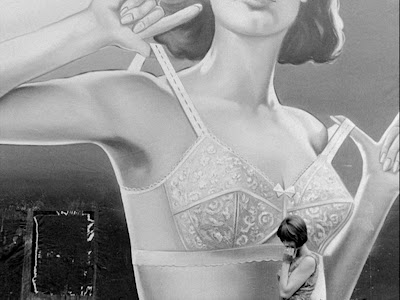 Amid the low key melodrama, Godard finds the time to skewer some of his favorite targets. His fiercest rancor is directed at advertising, and the film features an amusing subplot concerning Charlotte’s obsession with her chest. And one really can’t blame her, for as Godard makes plain, the Paris of 1964 was crammed with billboards for brassieres. France’s boob-mania crept into magazines and newspapers as well, and a very funny scene features a nearly nude Charlotte brandishing a tape measure to see how she compares to the ideal bust as described by an article in le Monde. But all good things must come to an end, and Charlotte’s visit to her doctor (Georges Liron) brings some unwelcome news that will severely test Robert’s adoration and sincerity. In the Godard pantheon, Une Femme Mariée is a minor work, completed while the legendary director was still quite damp behind the ears. But we see the origins of ideas, techniques and stylistics he would develop and exploit to great effect in later films. Still is exploiting them, in fact. But Une Femme Mariée remains an accessible and affable work; rich with its own visual pleasures and meaty wit. The dynamics of marriage have changed quite a bit in the nearly 50 intervening years, but the capacity of humans to delude themselves remains unabated. Truth be told, it’s probably gotten stronger.
at November 09, 2011

Wonderful post. I liked the poster, the stills and the review. Now I have to see the film too.

Your last two lines are oh, so true.