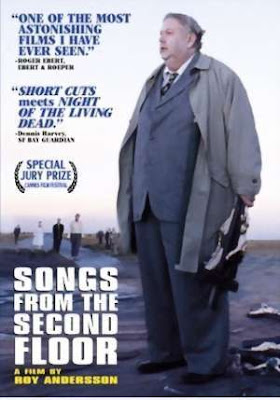 Produced in 2000, Roy Andersson’s astonishing collection of bizarre and satiric set pieces was intended as a farewell to the excesses of the 20th century, but it’s also an eerily prophetic glimpse into the grim decade that lay ahead. Set in a gray, oddly depression era looking city, “Songs” is constructed as a series of long take vignettes that weave a number of concurrent storylines into a starkly surreal tapestry of modern life, dealing with everything from age discrimination to the Holocaust to the commercialization of Christianity. 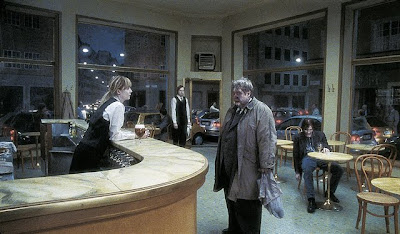 And below the narrative level, Andersson also gives us a thorough primer in cinema history. Most of the film takes place on elaborate, impeccably art directed sets that are reminiscent of films like “Brazil” and “Metropolis”, but the tributes do not end there as homage is paid to Godard, Fellini, Bergman and even George Romero. 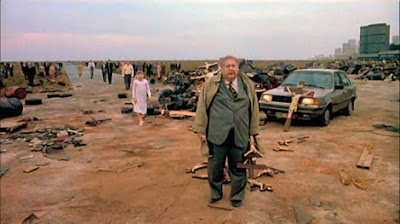 Indeed, part of the enjoyment of this film is spotting, and attributing, Andersson’s next quotation. The film is primarily a comedy - at times a side-splitting comedy - and, for a Scandinavian film, surprisingly slapstick in nature. You’ll probably hate yourself for laughing at some of the crueler scenes, but you will laugh. 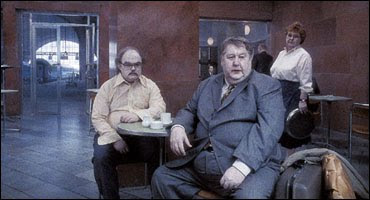 The nearest parallel I can draw to the directorial style is those old Federal Express commercials from the 1980s, directed by Chicago’s Joe Sedelmeier, which featured wide angle lens shots of comatose-looking actors gawking into the camera in a comically stupefied manner. But that is a feeble attempt on my part, for to concisely and accurately describe this extraordinary film is beyond this reviewer’s vocabulary. “Songs from the Second Floor” is simply amazing. Just watch it.

The scene after the "sacrifice" had me howling with laughter. Do check out the 'thematic sequel' You, the Living which is (almost) as good and surprising in its strange life affirmation.

Thanks Joe. You, the Living is now high in the Q. Releasing 1/12 on NFLX

Yes! Yay, I'm glad to see this on your blog. It's one of my favorites of your reviews. Still going to see this film again, soon, although I know my husband is going to hate it. And now I'm adding "You, the Living," too.

Thanks Tracey. I see your blog is up and running....and really interesting. Love the title. I am traveling this week, but I am looking forward to reading more when I get back. I am adding a link.