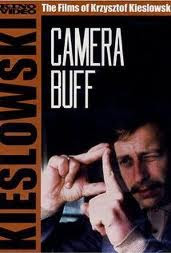 A small town rube’s home movie hobby threatens to steal his very soul in this tragicomedy from director Krzysztof Kieslowski. Filmed in the dreary exurbs of Krakow, Camera Buff tells the story of Filip (Jerzy Stuhr), a worker in one of communist Poland’s grimy widget factories, who acquires a super-8 movie camera to chronicle his newly born daughter’s formative years. But Filip’s short subjects of ga-gas and diaper changes attract the attention of his supervisors, who enlist the fledgling filmmaker for a self-serving puff piece documenting a visit to the factory by state big-wigs.

Filip’s epic draws praise from his superiors, effectively throwing gas on the fire of his new passion. He becomes more and more obsessed with the creative possibilities of narrow strips of celluloid and soon is filming everything from lackadaisical street repair crews to soaring birds of prey (not the film’s only allusion to Ken Loach’s Kes). But Filip’s pastime stirs resentment from his wife Irka (Malgoraza Zabkowzka). Filip has become practically useless as a childrearing partner, and Irka would welcome more help with the 2am feedings and less cinematography. 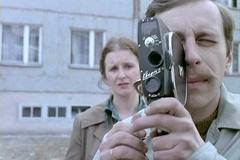 Kieslowski cleverly examines the ramifications of filmmaking and in particular the role of the filmmaker in a society that thrives on half truths and heavily tailored messaging. When Filip enters a documentary about a disabled coworker into a film festival, the powers-that-be see the production not as a simple, heartfelt portrait but a patriotic tome celebrating the empowering glories of Soviet economics. Polish TV executives assign Filip a series of films designed to show the success of a social engineering project undertaken in his hometown and Filip’s all too happy to be a useful idiot, despite the fact he knows the project is a fraudulent failure.

What started as a harmless way of capturing family history morphs into a Faustian bargain with enormous consequences through Filip’s disheveled naivety. But Kieslowski tells this tale with such gentle humor that the audience, like Filip, are blindsided when he finds himself in a sticky trap of his own making. Despite the entertaining cocoon Kieslowski presents, he pulls no punches as he elevates bumbling Filip into an iconic figure: the innocent artist too quick to believe his own press clippings, allowing his work to be manipulated by those he foolishly trusts.

As a director, Kieslowski had a wonderful ability to combine the mundane with the magical, creating stark textures imbued with allegorical possibility. It was a quality he would fully exploit in later films like The Double Life of Veronique and the Colors trilogy. Here he examines the filmmaker’s lot without self pity and victimization, but with a harsh assessment of an artist’s individual responsibility. Directors who engage in the navel gazing act of making films about their craft usually go way too easy on themselves, or portray their alter-egos with extreme cartoony ruthlessness. As Filip realizes that his 16mm dreams have come true at a terrible price, he finally turns the camera on himself, both in an act of symbolic suicide and in recognition that he has become as pathetically twisted as his former subjects.
at May 02, 2011

"As Filip realizes that his 16mm dreams have come true at a terrible price, he finally turns the camera on himself, both in an act of symbolic suicide and in recognition that he has become as pathetically twisted as his former subjects."

Actually, Kieslowski was proposing something here that he developed in all his later films.

In the final scene of this film, Filip realizes that the only thing the individual might have control over and with any hint of truth or freedom is the depiction of the inner self and personal emotions.

Toward the end of his life, Kieslowski expressed the view that ultimately he had failed to portray and achieve these things by means of cinematography, even though The Double Life Of Veronique, had gotten closer to it.

Very good point Alexandre. I debated getting into the Filip's retreat into the personal, but I was afraid the review was getting unwieldy.
Your website is very interesting and a virtual Kieslowski encyclopedia. I encourage everyone to visit and enjoy.
Thanks for your comment.

DANG, but you write good! What a great review! x,shu zin