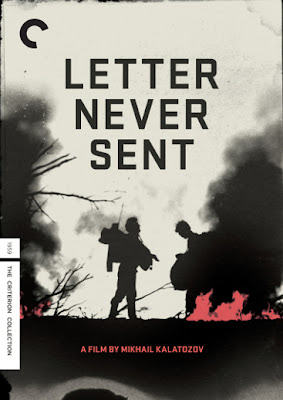 Bergman and Nykvist, Bertolucci and Storaro, Welles and Toland; the history of cinema is replete with great partnerships between directors and cinematographers. Through potent mixtures of chemistry and vision, these collaborations created works of iconic visual style, endowing the world with a lexicon of cinematic reference. Films like The Seventh Seal, The Last Emperor and Citizen Kane are so deeply entrenched in the canon they can usually be identified from one mere frame. While not as well known to westerners, director Mikhail Kalatozov and cameraman Sergei Urusevsky comprised an equally impressive artistic symbiosis in the Soviet Union during the early years of the cold war. 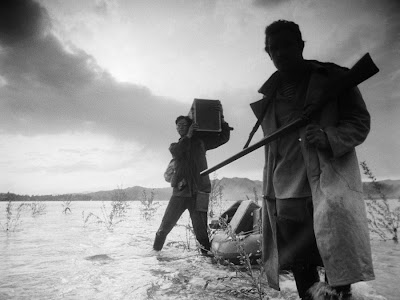 Hopefully Kalatozov and Urusevsky’s days of obscurity will come to an end with Criterion’s stunning blu-ray edition of Letter Never Sent, a chilling adventure from 1960 built from the whole cloth of nihilist nightmares. Like Russian dolls, the film presents reflections of Man’s relationship with the natural world in strata that lead ever deeper into the primal. Soviet society is on the verge of a historic technological breakthrough, but the means of achieving it lay buried deep in Mother Earth, and she does not dispense her spoils easily. As a small band of geologists will discover, the race to conquer the unknowns of outer space is infused with irony; for within the Soviet Union’s own borders exists a realm as untamed and remote as the moons of Saturn, and equally perilous. 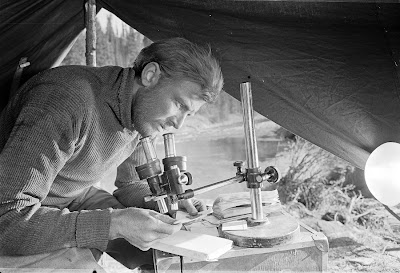 Four Soviet scientists are dispatched to an unpopulated, sketchily charted region of Siberia in search of a long rumored lode of diamonds; a rich vein the Kremlin hopes will pay for its ambitious space program. The expedition is led by Sabinin (Innokenti Smoktunovsky), a laconic explorer of steely resolve who has attempted this search before only to come up empty. Accompanying him are the brawny Sergei (Yevgeny Urbansky) and a soon to be married couple: enthusiastic young Andrei (Vasili Livanov) and the beautiful Tanya (Tatyana Samoilova), who are head-over-heels in love. The first half of the film is devoted to the party’s trudge into the forbidding taiga, where weeks of rough living and back-breaking labor await them. But just as it appears the intrepid band will be rewarded for their efforts, a raging forest fire threatens to engulf them. With acres of towering spruce igniting like tinder, Sabinin and his associates realize that survival will require a herculean and heroic fight, a fight that must be successful to insure Russia’s reach for the stars. 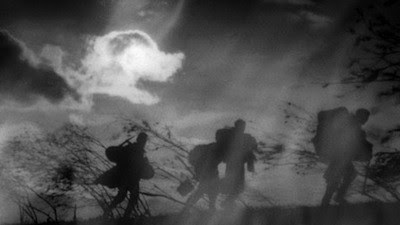 Criterion’s previous Kalatozov/Urushevsky release – 1957’s The Cranes are Flying - was a spectacular showcase for the pair’s visual wizardry and Letter Never Sent continues their tradition of exquisite imagery. Gone are the complex, highly coordinated long takes involving thousands of extras that made Cranes such a bravura piece of filmmaking. Letter Never Sent is a more personal and philosophical work, although it too eventually radiates into grandiose scale. The film’s sudden shifting from internal monologue to a natural world gone mad is shocking and stunning, like the intrusion of a terrifying dream on quiet meditation. Urushevsky’s camera captures the brutal beauty of the smoldering taiga with stark compositions reminiscent of Ansel Adams’ brooding vistas of Yosemite. His rock steady handheld from Cranes is equally impressive here, tracking the exhausted explorers over miles of rugged terrain with the precision of motion control. 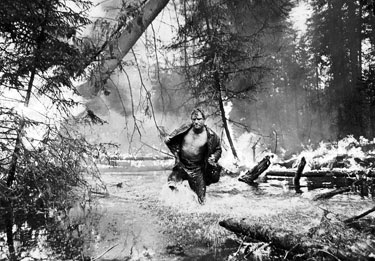 Letter Never Sent is a film that manages to transcend an overbearing score and an underdeveloped script to deliver a cinematic experience that triumphs on sheer visual aesthetics. Despite enormous physical challenges, Kalatozov and Urusevsky created a nightmarish wilderness journey, pitting the resilience of the human spirit against nature’s dark and deadly forces. Its attempts at profound commentary may be lacking, but Letter Never Sent remains a marvelous and harrowing spectacle, and this hi-def offering is a worthy addition to any cinephile’s library. We can only hope that 1964's I Am Cuba, considered by many to be Kalatozov and Urusevsky’s finest achievement, will one day get the deluxe Criterion treatment.

Great review. These Soviet films of that era are really underrated nowadays.

Mr. Anderson, you would have sold me on this specimen, if it weren't already in transit from Amazon. Thanks for a great review.

Thanks Anon! looking forward to your thoughts on it.

Bob: Couldn't agree more with both of your comments.
Christina brightens up any decor:)