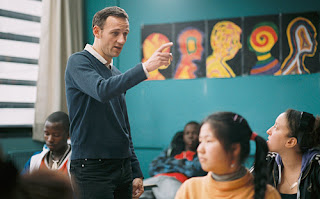 Get comfy, because once this film starts, you won’t be going anywhere. In a world obsessed with witches, vampires and superheroes, Laurent Cantet has quietly spent the last decade making modest, straightforward dramas about Real People with Real Problems. And the odd thing is, his small, naturalistic films are much more interesting than any of the effects-laden Hollywood blockbusters. In this Palme d’Or winner, Cantet pushes the boundary between documentary and drama so hard it frays and very nearly breaks. “The Class” captures the gritty essence of one year at a rough-and-tumble Paris high school and features a group of students, teachers and parents all basically portraying themselves. Francois Beguadeau, a former teacher who also wrote the memoir on which the film is based, plays the central character, a teacher named Mr. Marin, and is in many ways a co-director, as his energy and enthusiasm leads his wide awake kids through the largely improvised scenes and into extraordinary moments of true discovery. Through the course of the film we get to know many of the students and their families and their interactions seem so real you have to keep pinching yourself to remember this is a fictional work. Especially noteworthy is Franke Keita as Souleymane, a child of recent immigrants whose face conveys a heartbreaking mix of hurt, shame and anger. As a teacher, Mr. Marin is not perfect, neither is this film. But “The Class” is a riveting experience and the shortest two hours this reviewer has experienced in some time. Yes, there are those that hate the idea of public education and will therefore hate this film. They are to be pitied. 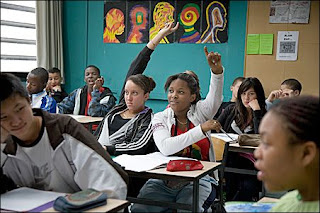