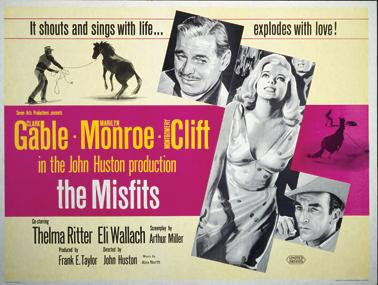 John Huston’s The Misfits has attained a historical stature that dominates any discussion of its merits as cinema. Known mainly as the last screen appearance of icons Clark Gable and Marilyn Monroe, the film is a breathless encyclopedia of lurid behind-the scenes lore – chock full of the stuff that made Hollywood gossip such a profitable industry. The whispered tales of binge drinking, petty jealousies and devastating emotional breakdowns were exposed and exploited by the media when Gable suffered a fatal heart attack a mere 10 days after the film wrapped. When Monroe died from an apparent suicide 18 months later, The Misfits’ decadent tinge only grew darker; her legions of grieving fans left to hopelessly wonder what had really gone on out there in the Nevada wilderness. 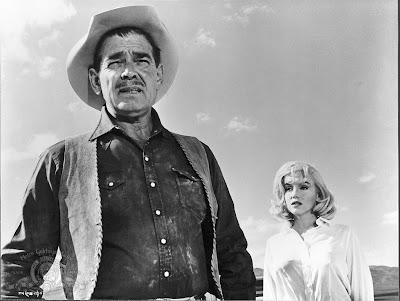 Both by design and by accident, The Misfits is a remarkably prescient farewell to an era. Huston’s intent was to chronicle the death rattles of the American cowboy tradition; the demise of rugged individualism in a modern world that rewarded conformity and commerce. The adventurous riders of the western plains were being corralled by the material pressures of consumerism; their free spirits permanently altered by the crushing need to draw steady paychecks in a new, commodity based, reality.

But from today’s perspective, it’s no stretch to say The Misfits was also a harbinger of the iconoclastic American cinema of the late 60s and early 70s. Its rebellious, wholesale questioning of the nation’s underpinnings was echoed in countless later films, from The Graduate to One Flew Over the Cuckoo’s Nest. In addition, the film presented an evolving image of women - of blond bombshells anyway – that, while not exactly feminist, at least conceded that broads were capable of serious thought and opinions, not to mention melancholy and deep regret. With The Misfits, Huston and writer Arthur Miller may well have created the very first hippie film. 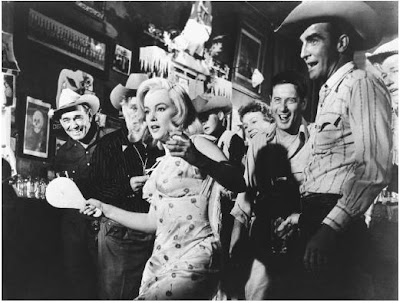 Miller’s august ability as a writer of popular Broadway dramas is apparent in the film’s libretto-like structure. Conceived in three acts, The Misfits builds like an inverted pyramid, with the bearing point squarely on the back of Eli Wallach, who plays a cowboy turned tow truck driver named Guido and serves, largely by default, as the film’s witness. One day while appraising a wrecked Cadillac in a leafy Reno neighborhood, he encounters an eccentric boarding house proprietor (the great Thelma Ritter) and her tenant Roslyn (Marilyn Monroe), a woman of astonishing sensuality. Monroe is prepping for a court appearance as part of her divorce proceedings, and the smitten Guido is all too happy to offer the shapely blond a ride downtown in his greasy, rattling conveyance. The film features no shortage of scene stealers, and here Ritter takes the early lead in a brilliantly written expository conversation detailing her assortment of broken clocks that’s as funny as it is informative. With just a few deft strokes, Miller establishes setting, sexual intrigue, plausible backstory and a fascinating narrative path forward before we even realize what he’s up to.

Gable’s introduction is equally inspired. Here he plays an aging, hard drinking cowpoke named Gay Langland. We meet him at the train station, where he is in the process of dumping a chatty heiress from St. Louis in such a smooth, tender manner she’s oblivious to the break-up. This is clearly not the first time Gable has discarded his romantic baggage on eastbound trains, and in dizzyingly effective visual shorthand he becomes the embodiment of the wildly macho frontier spirit. But in the relatively civilized confines of downtown Reno, that spirit seems more caddish and irresponsible than ruggedly heroic, and this conflict of perceptions will drive the rest of the film. 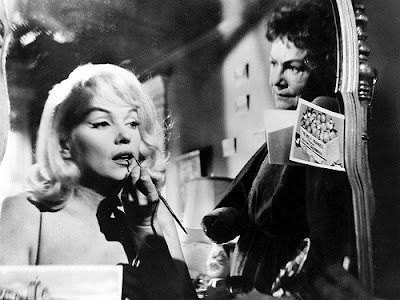 But Act One undoubtedly belongs to Monroe, as she runs a spectrum of reactions, from the weepy to the dangerously curious with a riveting, poignant grace. Her crow’s feet and nascent double chin only add to her famous beauty, and bring her into the realm of earth mother mysticism. When the starry eyed Gable attempts his time-worn seductive formula, Monroe makes it clear that she’s on her own romantic timetable.

When Monroe and Ritter accompany the men to Wallach’s rustic desert cabin for an evening of drinking and dancing, Monroe’s breathy voice becomes a celebratory instrument of the splendors of Existence, without a hint of the sexual double-entendre that laced her oratory in earlier films. Monroe’s work here is truly impressive, and if Arthur Miller’s intent was to establish his wife’s dramatic bona-fides, as is often rumored, then his efforts were wildly successful.

Act Two expands the palette to encompass a new character, Montgomery Clift as Perce Howland, a rodeo stunt rider so damaged by head injuries and deep emotional wounds he seems on the verge of either horrific violence or a permanent retreat into the fetal position. In a sense, Clift’s performance is a thing of wonder – it’s either pitch perfect or appalling – and the verdict seems to vary by the frame. When he joins the principals for yet another bender, his inebriated character exudes prissiness in loud tones that would make Sean Hayes blush, but this motivational avenue is never explored. The middle section is rife with drunken mad scenes, and the film comes very close to being sunk by excessive emoting. Gable pines for a lost child, and eventually works himself into a deafening froth that’s more embarrassing and illuminating. Wallach, the former bomber pilot, reveals dark suicidal tendencies as part of an early form of PTSD. And all of it is accompanied by Alex North’s aggressively cornball strings that compete with, rather than support, the performances. 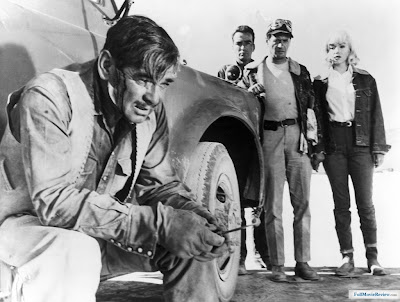 All is forgiven in Act Three, an excitingly executed set piece that brings the film’s muddled and meandering thematics into sharp relief. Our heroes depart for a remote desert valley, where we learn a haunting lesson about the stiff price of freedom and independence. According to legend, this sequence is more in line with the type of film John Huston wanted to make, and that’s certainly reflected in its grand visual structure. Russell Metty’s day-for-night cinematography is harrowingly effective, not for its evocation of moonlight, but for a darkening mood of advancing storm clouds; clouds that threaten to snuff out the principals in a deluge of modernity. The sandy valley floor is transformed into a deathbed for the Western Movie ethos, as cowboys and horses no longer exist in respectful symbiosis, but have become bitter competitors for ever dwindling resources. But Gable’s constant rationalization that “They’ve changed everything” ultimately sounds like no excuse at all, and with Monroe’s loud protests ringing in his ears, he allows himself to be dragged, literally, into a contemporary mode of thought. The film’s ending strikes cathartic tones of justice and mercy and, most amazing of all, feels totally organic and devoid of even a hint of contrivance. And this reviewer can count on one hand the number of American films to which that description applies. 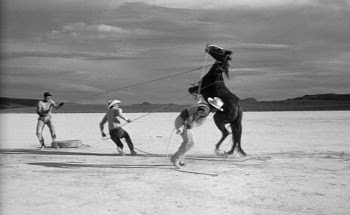 A splendid job has been done with the B/W transfer. It’s clean, rangy and crackles with a vibrant tonality. The day-for-night scenes have an other-worldly glow that’s simply beautiful to behold. While shot with nets – supposedly to hide Monroe’s emerging wrinkles – the image retains a pleasing crispness and all the detail one could want. The diffusion gets a bit heavy in one scene - an intercut conversation between Gable and Monroe at the breakfast table and the shots don’t really match - but otherwise DP Russell Metty shows extremely good judgment with the use of filtration.

The audio track, available here only in the original mono, is remarkably robust and clean for a film featuring so many noisy, uncontrollable locations. If there was significant dialogue replacement, as logic suggests, it’s blended so seamlessly there are no audible hints.

The only bonus material on offer is The Misfits’ teaser, and it’s an interesting blend of the film’s rather stark title animation – moving graphics were all the rage in 1961 – and freeze frames from the production. As one would expect with this heavyweight cast, the trailer focuses mainly on the stars while revealing little in the way of narrative. 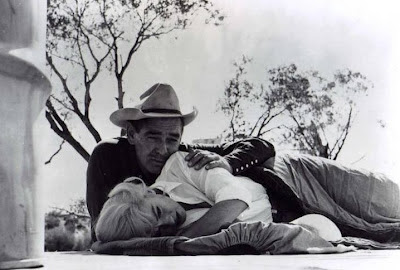 It would take a long time for The Misfits to recover from the critical drubbing it received in 1961 - along with its perception as a cursed production – and be recognized as an American cinema essential. Despite some unevenness and a draggy second act, The Misfits successfully captures a disturbing spirit of iconic transition and shifting zeitgeist. Ardent fans of Gable and Monroe weren’t ready for Huston and Miller’s warning of national decline and decadence; a warning that has been borne out a thousand times in the following decades. This fiftieth anniversary edition offers illuminating perspective on the film’s uncanny predictive powers. It is not unusual for a movie to be a reflection of its times. But with chilling accuracy, The Misfits was an ominous reflection of times to come

You almost make me want to watch this again, but I've sworn off Arthur Miller, Tennessee Williams, and William Inge and their talky melodramas.

Monroe, and especially Gable, are outstanding. This is the best I've ever seen Gable. He gives a deeply moving presentation as a man fighting the demons. I rarely care for Eli Wallach and in this movie he's practically superfluous.

I'm afraid that after the drawn-out depressing act 2, not all is forgiven in act 3, at least not with me. Sorry. Perhaps if I'd read your review before watching it...

The movie is not without liabilities for sure. I respect it more for its historical significance than any cinematic virtue.