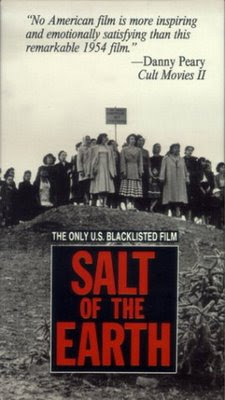 Salt of the Earth would be a wholly insignificant film except for its era-defining historical baggage. Writer Michael Wilson, director Herbert Biberman and actor Will Geer had all been blacklisted thanks to Joe McCarthy and his surly gang of grandstanding paranoids. The fact that this bunch was able to make any film at all, especially one that extolled the virtues of international labor unions, was a gutsy, in-your-face accomplishment. The production was challenged at every turn, with none other than Howard Hughes threatening to shut down any film lab that ran the degenerate commie negative through its processor. By the tireless vigilance the nation’s aristocratic elite - their well paid lawyers, anyway – innocent Americans would be spared Salt of the Earth’s subversive advocacy of racial equality and human dignity.

The film centers on a miner’s strike at a zinc extraction hole in a far flung corner of New Mexico – actually, in 1954 all parts of New Mexico were far flung – and is loosely based on actual events. Quite pregnant Esperanza Quintero (Rosauria Revueltas) lives with her miner husband Ramon (Juan Chacon) and two kids in a tiny company-owned cottage. She serves as the film’s occasional narrator and overall moral compass. Ramon’s local is predominantly Latino, but that doesn’t stop the managerial scumbags of Delaware Zinc from repeatedly assigning the most dangerous duties exclusively to Mexican-American miners. The foreman’s plan is as simple as it is reprehensible: build racial tension and animosity to divide the miners and, ultimately, neuter the union.

Biberman, who never misses a chance to inject schmaltz, spends a lot of time establishing Esperanza’s miserable existence. She cringes as the disgruntled Ramon returns every evening to bolt his dinner in the foulest of moods. Ramon berates Esperanza’s purchase of a radio on credit, declaring the installment plan a nefarious plot to enslave the working man. Meanwhile, amid the crying and shrieking of the frightened offspring, the sobbing Esperanza prays to God that her baby never be born. And thus ends another quiet night in the Quintero household. 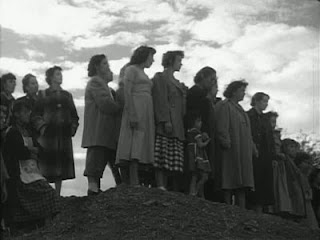 Things come to a head when Ramon nearly blows himself to bits one day, and the miners vote to strike. The screenplay then opens up to address all manner of injustices, including the plight of the miners’ wives and oppressed women the world over. When the men are barred from picketing by a slick legal maneuver, Esperanza and her fellow housewives take up the protest signs and spend their days marching in the high desert chill. The men, stuck at home caring for their squalling kids, begin to think that fumbling around in the dark with powerful explosives is not so bad after all. While the cocky and condescending miners fully deserve this dose of feminist comeuppance, Biberman conducts the sequence with the texture and depth of a sheet of paper, and all sense of irony is lost.

The film was shot in B/W on location in the bright New Mexico sun, resulting in glaring contrasts that give the production a distinctly newsreel look. Appropriate, since Michael Wilson’s script has the subtlety of a wire service bulletin. It turns out the local sheriff (Will Geer) is in cahoots with the mysterious mine owner (David Wolfe). Things get a little silly when the constables start to lock up all the women and children, but the resulting fiasco reveals the cracks in this unholy alliance between management and law enforcement. And underneath it all is Sol Kaplan’s over dramatic, repetitive score, which sounds like the anthem of some obscure nation that just took the silver medal in archery. 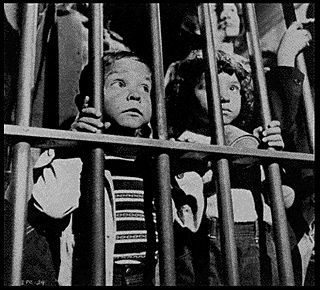 When word reached Washington that the dastardly Herbert Biberman was producing a foul ode to communism, the production took on the habits of a criminal enterprise – constantly on the move, forced to keep one step ahead of McCarthy’s harassing hoard. Production plans were often altered on the fly, so considering these extreme circumstances Salt of the Earth has been given enormous critical slack, and rightly so. Still, audiences will not be surprised to learn that most of the actors were non-professionals, although Chacon, a real life miner and union official, does a credible job as Ramon.
But Congressional power could only be resisted for so long, and ultimately the House Un-American Activities Committee extracted their pounds of flesh. Yielding to pressure, all but a handful of theatres refused to show the film and, according to legend, the original negative sat in a tool shed in Los Angeles for a decade, safe from confiscation and ultimately forgotten. Michael Wilson, using a variety of aliases, was able to keep working and eventually a guilt-ridden Academy awarded him a posthumous Oscar for Bridge on the River Kwai. Biberman was not as fortunate. Finding assignments scarce, he waited on the sidelines and watched his old school, theatrical directing style fall completely out of favor in the nouvelle vague influenced Hollywood of the 1960s. But McCarthy’s most severe punishment was reserved for leading lady Rosauria Revueltas, who was deported to Mexico where she lived out her days as a yoga instructor. 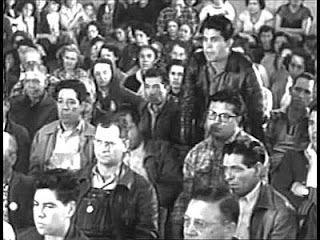 Alternately cursed and acclaimed, Salt of the Earth stands as a testament to the self correcting nature of the American political pendulum. For Congress to think that this melodramatic piffle posed a serious threat to the United States was the height of absurdity. But, as we are seeing in Wisconsin, Arizona and a few other states, that’s what happens when we elect cowards and bullies to represent us.
at May 13, 2011

Excellent review. The tragedies behind the camera are as interesting as those in the film. Or even more so.

Agree with Bob, above. Sometimes the story behind the story is the best one. (And perhaps I'm in a silly mood today, but your line "lived out her days as a yoga intructor" really tickled me.)