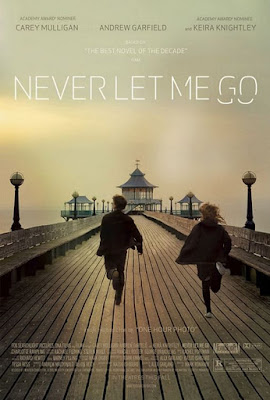 Never Let Me Go is an intriguing dose of speculative fiction, set largely in the 1980s, and tracks the relationship of 3 friends - Kathy (Carey Mulligan), Tommy (Andrew Garfield) and Ruth (Keira Knightly) – from childhood to their late 20s. The story contains some familiar thematic elements from popular sci-fi, but places those elements in unexpected pastoral settings, creating a film that’s ultimately an odd mixture of Blade Runner and How Green Was My Valley. The plot hinges on hidden nuggets of information – quite shocking information - that are slowly doled out in baffling hints and whispers in the first act. By the time a sympathetic boarding school teacher (Sally Hawkins, back to being normal again after Happy-Go-Lucky) spills the entire can of Heinz beans, the film has tricked us into caring about these bright-eyed waifs. The explanation makes perfect sense and ties up all the dangling strings, but it’s cold comfort because confusion has been replaced by creeping dread. 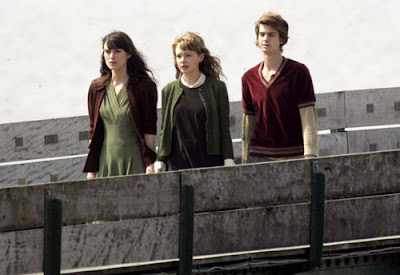 Carey Mulligan has a unique ability to play a victim without ever seeming weak or wobbly. It’s a trait she exploited in The Education to great effect and director Mark Romanek leans heavily on it here. The friends eventually graduate from their special school, and take residence on a sort of foster-farm, where they spend their days dodging cow pies while going for long walks through the dales. Mulligan maintains a stiff upper lip through it all, for not only is she fully aware of her fate, she must also contend with the burgeoning romance of foul tempered Ruth and innocent Tommy, for whom Mulligan has carried a torch for years.

As the principles approach their date with destiny, Romanek confounds our expectations by injecting  stately temperance in place of desperation. The film is based on a book by Kazuo Ishiguro, author of The Remains of the Day, and Never Let Me Go has the same repressed loathing of awkward embarrassment; the same admiration for those who allow resolute duty to trump fiery hysterics. When Kathy and Tommy have their last hope for happiness cruelly dashed at a meeting with their retired former headmistress (Charlotte Rampling), it is Kathy who delivers the final blow in an effort to spare all involved  a moment of social unpleasantness. 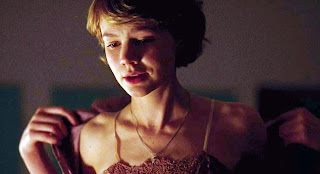 Through imagining a world devoid of medical ethics, Never Let Me Go is a film that raises questions about what it means to be truly human. Like the subservient household staff in The Remains of the Day, thoughts of individualism or rebellion never seem to enter the minds of Never Let Me Go’s young protagonists. Perhaps such notions have been bred out of the species – the film never really addresses that issue directly – but Romanek and Ishiguro have created a chillingly placid world resigned to sacrifice and subjugation. As the film intently marches to its prescribed conclusion, its fulfillment hits the soul like a sledgehammer. We are accustomed to a cinema of hope, a cinema of catharsis, and Never Let Me Go intentionally swims against that popular tide. Like Kathy, Tommy and Ruth, we are left with poignant memories as our only proof of earthly existence .
at March 29, 2011

I'm not sure how I feel about being tricked, though. And they aren't going to spend the whole move talking, are they?

You have to be careful Doug and think about our future. If word got out that you watched a quiet, thoughtful, arty film, you might get a rep as being sophisticated. And as we know, Americans hate their Presidents to be smarter than they are.