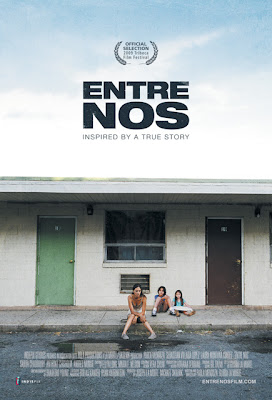 Entre Nos is a very simple and straightforward film that doesn’t deliver its big payoff until the end credits, but is it ever worth the investment. Columbian actress Paolo Mendoza stars – in a performance that would gain her Oscar consideration if she were the daughter of someone famous – as a young mother named Mariana who has recently immigrated to Queens with her two young children (Sebastaina Villada and Laura Montana). They have come to America to be with her husband Antonio (Andres Munar), a day laborer who seems to be happier when his family is not around.

True to form, Antonio soon bolts to Miami for a vague offer of temporary employment, promising to return in a few weeks. But as his phone calls and envelopes of cash dry up, it becomes clear to Mariana that she and her children have been abandoned – in a strange country with no friends and no knowledge of English; their only resources the clothes on their backs. 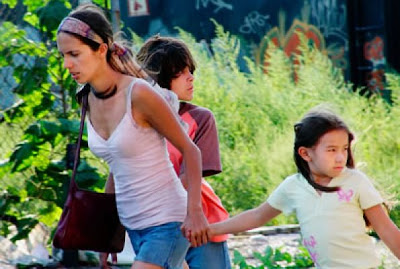 Co-written and co-directed by Mendoza and Gloria La Morte, Entre Nos is based on La Morte’s true experiences growing up in a family of Latino immigrants. As Mariana and her children struggle for the very basics of survival, the film presents many stark and heartbreaking moments. While the family grapples with homelessness, starvation and destitution, they display an admirable resiliency and determination to survive. The film is particularly effective at getting us into the mind Mariana, and the enormous burden she faces in providing for her children and appearing strong despite all the setbacks and obstacles they endure.

Shot on digital video, Entre Nos tells its story with clarity and unadorned immediacy. The narrative moves at a nearly perfect pace; pausing long enough for us to fully grip the family’s plight, but never letting us forget the constant pressures bearing down on them, and the sheer hustle that will be required to survive. Mariana is fortunate enough to meet some kind souls in her hours of darkest need and we are reminded of the fragile thread of humanity and civility that has stitched this nation together. We are also reminded of how unfortunate it is that so many of our nation’s leaders seek to tear those seams apart to suit their narrow self-interests. 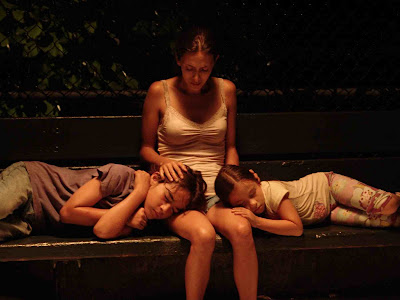 Mendoza and La Morte are careful to save their story’s big catharsis until the final moments and wisely focus on small, telling details for the bulk of film. And while Mariana and her family did not explicitly come here to experience the American Dream, that pursuit has been thrust upon them by the nature of American society. The film ultimately celebrates the traditional values of family, hard work and education in a way that young American filmmakers have long considered uncool. It’s ironic that it takes a film about struggling Latino immigrants to show us the best aspects of life in these United States.