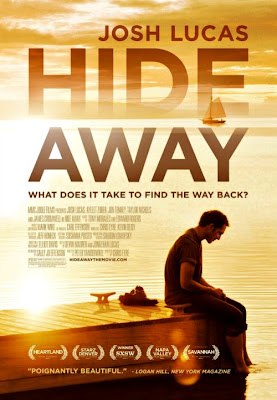 Morose and meditative, Hide Away is a film that’s executed to near perfection. Its scant narrative involves a nameless man (Josh Lucas) who purchases a run down, barely floating sailboat moored at a remote marina in the wilds of Michigan’s Upper Peninsula. Lucas makes the crumbling vessel his home, and spends lonely, quiet days in frustrating attempts at repair, occasionally relieved by periods of deep remorse and binge drinking. Lucas is clearly a man on the run from some emotional trauma, but the depth and cause of his misery remain an enigma. And if his attempts at self therapy are unsuccessful, a final plunge into Lake Michigan’s icy water may be the only cure.

But Lucas’ seclusion is incomplete. His mysterious labors do not escape the watchful eyes of the marina’s manager (Ayelet Zurer) and an old salty dog (James Cromwell) who observe with detached curiosity. In addition, Lucas periodically receives unwanted visits from a dapper businessman (Taylor Nichols); visits that prompt Lucas to go into hiding within the bowels of his decrepit schooner. As the golden light of autumn gives way to winter’s freezing fog, Lucas’ psyche is challenged by severe bouts of cabin fever. Slow trudges through deep snow to the local grocery store for flirty exchanges with a young cashier (Casey LeBow) serve as his only recreation.

Perhaps due to his Native American heritage, director Chris Eyre has always excelled at creating eccentric characters and introspective atmospheres. The mystical, reflective textures of Hide Away are custom-made for his sensibilities, and Eyre builds memorable sequences within the film’s austere framework. During a regatta, Lucas watches a parade of sailboats decked out with Christmas lights and drinks himself to near oblivion, creating an intense portrait of holiday loneliness and depression. As January snow mounts on his boat’s rotting hull, Lucas can only hunker down below deck where haunted memories await in a cramped, waterlogged purgatory. 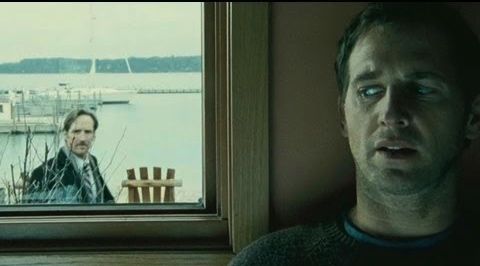 While every filmmaker manipulates time, Eyre works in ways that make the concept seem quaint and irrelevant. His short, largely wordless scenes draw a unique perspective of man’s small place in the natural world. Yet, that world has an abundance of metaphysical resources capable of healing even the most painful wounds. Despite his isolation, Lucas is never truly alone. As the leaves of spring begin to bud, the human and spiritual spheres patiently watch from a distance, waiting for his summons.

Lucas looks like a young Paul Newman. Which is in no way a bad thing.

Indeed, with a bit a Daniel Craig thrown in

Traverse City, MI is not in the upper peninsula. it is in the northern lower peninsula. The harbor in the movie is Bowers Harbor and the island is Power Island on the west side of grand traverse Bay.