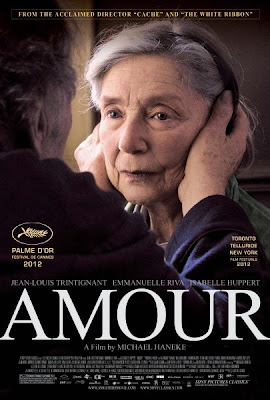 MIchael Haneke's filmography is notable for a consistent delivery of style and substance; doling out a masterful mix of aesthetic candy and wrenching weltschmerz. Whether it’s the abruptly gritty ode to urban isolation Code Unknown (2000) or tracing the sociological roots of Teutonic aggression in The White Ribbon (2009), the director skillfully creates squirmy discomfort for viewers while seducing them with elegant craftsmanship. in Amour, Haneke tells a tale of human entropy, reducing his canvas and his creative flourishes in favor of perfectly detailed moments, constructing a stark tribute to the minutia of aging and death. 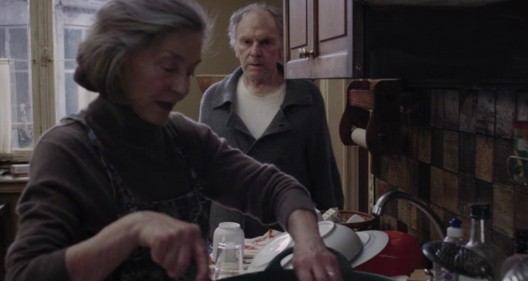 Set almost entirely within the confines of a Paris apartment, Amour is the story of Georges (Jean-Louis Trintignant) and Anne (Emmanuelle Riva) Laurent, a retired couple in their 80s. This loving pair of former music teachers lead a quiet life of newspapers, cups of tea and occasional outings to piano recitals. One morning at breakfast, Anne appears to mentally drift away and becomes unresponsive. While the episode is only temporary - Haneke uses a clever trope involving a running faucet to illustrate her return to coherency - it signals the beginning of a downward spiral in Anne’s health. Over the coming months, her worsening condition will test the couple’s long held bonds of love, pushing Anne and Georges to the limits of endurance. 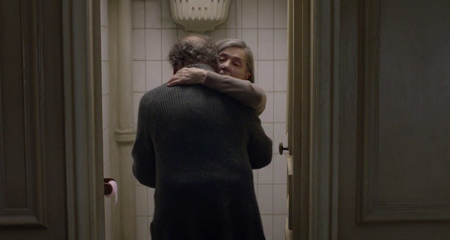 Don’t expect a triumphant tale of recovery or the healing power of love. Amour wallows in the nuts-and-bolts of home health care, with sobering scenes of Georges and Anne’s grinding regimen. Haneke, a director known for the occasional sadistic streak, engages in no sensationalist augmentation here, dispassionately capturing the slow and careful process of attending to the daily functions that help the sick retain a semblance of civilized humanity. The film deals with the emotional and physical toll of caregiving in a frank and unvarnished manner with Georges’ physical exhaustion mirroring Anne’s increasingly otiose existence. The couple’s tenuous connections to the outside world - chiefly their self-absorbed daughter Eva (Isabelle Huppert) and a former piano student (Alexandre Tharaud, a real life concert pianist) - may be aghast at the Laurents' situation, but as death’s dark cloud pervades the apartment's dingy corners, they’re unable to offer any better solutions. 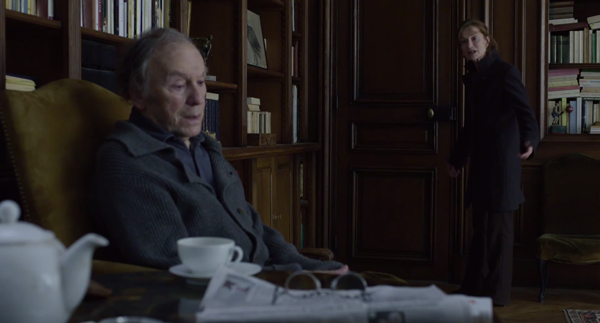 As the months wear on, Haneke visually manifests Anne’s inner deterioration in small ways that ring inexorably true. Her nightstand, in the early stages a repository for books and reading glasses, becomes littered with sippy cups and vials of medicine - the ephemera of grave illness - as her condition worsens. The bedroom’s walls are stacked with packages of adult diapers, which now must be bought in bulk and kept within easy reach. Georges' slow but steady gait becomes a wobbly stagger as he repairs to the guest room when Anne’s sleepless, tortured nights become too much to bear. In a chilling scene that posits the link between dignity and guilt, Georges attempts to hide Anne away in her room when Eva makes a surprise visit, completing the parent/child role reversal ellipse that so often typifies aging. 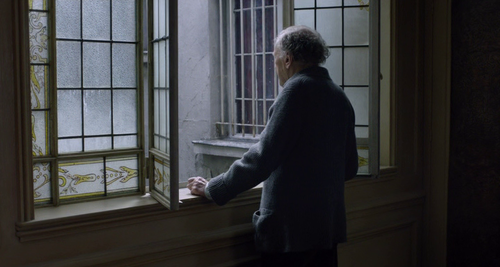 There is a profound method to Haneke’s dry clinical approach. As the film progresses to the final act, audiences will find themselves as physically drained as Georges, and wholly sympathetic as his faculties and judgement reach a dangerous brink. In true Haneke fashion, Amour ultimately delivers its own shocking moments and disorienting aftermaths, and it does so with raw courage unfiltered by sentiment. No Amour is not a feel good popcorn movie. It’s a brilliantly guided journey worthy of admiration and a perfect embodiment of Bette Davis’ immortal phrase: “Getting old ain’t for sissies.”
at August 25, 2013