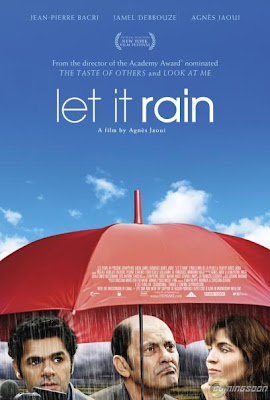 In Let it Rain, Agnes Jaoui and Jean-Pierre Bacri return with another pitch-perfect dissection of France’s pompous creative class. Fans of Jaoui’s previous scripts, Un aire de familie (1996), The Taste of Others (2000), and Look at Me (2005) – the latter two directed by Jaoui as well – know all about her ability to craft subtle character portraits of such icy accuracy that audiences suddenly erupt in belly laughs of recognition. Bacri, Jaoui’s husband and perennial leading man, is the perfect vessel for her delightful tales of homespun hubris. Bacri possesses tools that are the envy of every comedic actor: a face that smoothly glides from sour to smug, and line readings delivered with the precison timing of a Bach concerto. 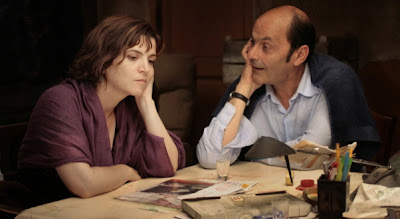 In this outing, Jaoui plays Agathe, a writer of radical feminist books and broadsides, who finds herself running for a parliament seat thanks to France’s gender equality laws. While her candidacy is a long shot – polls show her at 18% and dropping – Agathe continues to go about the glum business of retail campaigning in hopes that enough hand shaking and baby kissing will reverse her numbers. Agathe is learning that discussing politics in Parisian cafes over coffee and Gitanes is infinitely more fun than trolling for votes among the great unwashed.

Agathe takes a break from the campaign and returns to her family’s home in Provence to settle her late mother’s estate. There, she reunites with her unambitious sister Aurelie (Florence Loiret-Caille) and her impossibly narcissistic brother-in-law Stephane (Guillaume de Tonquedoc, in a brief but very funny performance). Overseeing the grande maison is Mimouna (Mimouna Hadji), an Algerian housekeeper who has spent most of her life attending to the practical needs of this family of egotistic dreamers. Without her, they surely would have starved decades ago. 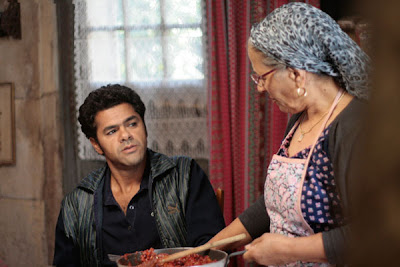 Minouna’s twenty-something son Karim (Jamel Debouzze) currently works as a bartender but is attending film school in hopes of becoming a famous documentarian one day. His instructor Michel (Bacri), a burned out, second tier filmmaker, hatches a scheme utilizing Karim’s connection to Agathe to film an interview with the controversial politician. Agathe agrees – figuring she’s got nothing to lose – but the eccentric, rambling nature of Bacri’s questions reveals much more about the neuroses of the filmmaker than the positions of the candidate. But as we eventually learn, the real reason for Michel’s interest in this project has little to do with politics, but rather with making his tireless quest for personal gratification a little more convenient. 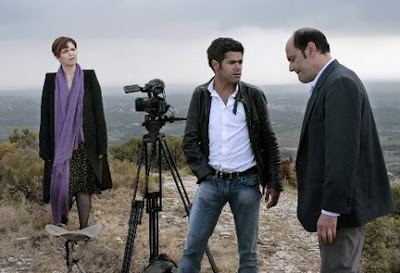 The cockeyed, yet familiar worlds constructed by Agnes Jaoui are populated by folks who are much more self-absorbed than self-aware, and her films specialize in the infliction of karmic justice upon the arrogant. There are a number of these wonderful, laugh out loud moments in Let it Rain, and each one is preceded by a slow and steady build that makes the revelation of her characters’ pretensions all the more sweet. 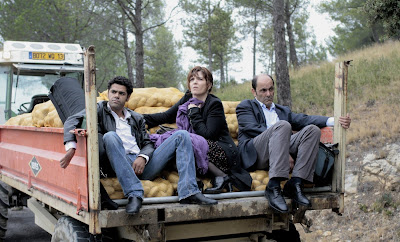 When Bacri meets his geeky teenage son (Laurent Jarrior) for dinner, Michel’s ego will not allow him to admit that he is unfamiliar with certain menu items, so he launches into a lengthy and erroneous explanation of how pudding is made, only to be corrected by a haughty waiter. While Aurelie mourns her mother’s passing, it is her thoughtless husband who comically seeks solace for the profound pain the tragedy has inflicted upon him. In one of the film’s funniest scenes, a sudden storm forces Agathe and the film crew to take shelter with a farm family. But when they discover Agathe’s profession, the farmers’ warm hospitality turns into a hysterical debate on the distribution of agricultural subsidies. 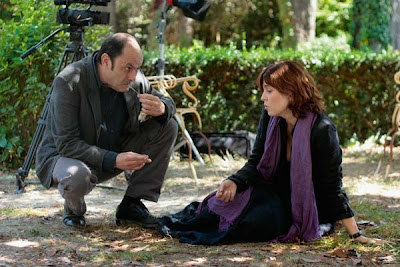 One bit of business near the film’s conclusion encapsulates Jaoui’s telescoping view of the human condition. When Bacri offers her a toke of marijuana, Agathe reluctantly accepts and, a few moments later, this hard charging crusader for women’s rights is held utterly spellbound by observing the activities of a nearby ant. And such are the characters of Agnes Jaoui. They talk a good game, but are easily derailed by the tiniest distraction. By her clever and incisive skewering, their pomposities deflate and whither like week-old birthday balloons. 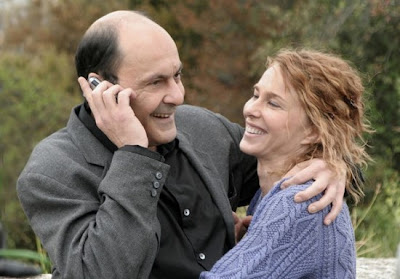 But underneath Jaoui’s constructions and Bacri’s dissembling lays a tale both amusing and cautionary. A generation weened on the navel-gazing culture of the late 20th Century is now assuming command of the world’s levers of power. God help us.