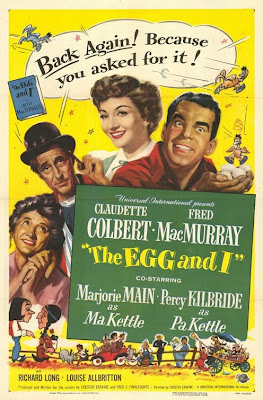 The Egg and I is an amusing and cheerful bit of Americana, filled with old fashioned grit and pluck and sexism. That’s a cheap shot of course. It’s unfair to expect enlightened thought from any American comedy of this period, particularly one that marked the screen debut of Ma and Pa Kettle. 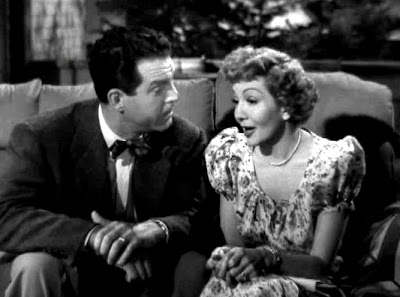 Bob (Fred MacMurray) and Betty (Claudette Colbert) are cozily ensconced in the bridal suite at a fashionable NY hotel. This is their wedding night, and Bob thinks it’s a fine time to finally divulge the cunning life plan he’s developed to his new bride. Bob plans to chuck the rat race of corporate life, head out to the country and pursue a career in chicken ranching. To this end, he has recently purchased 40 godforsaken acres smack dab in the middle of nowhere, without his wife-to-be’s knowledge or consent. Colbert, a bit shell-shocked by the news, dutifully agrees, rather than do the sensible thing, which would be to grab one of new husband’s expensive neckties and strangle him. 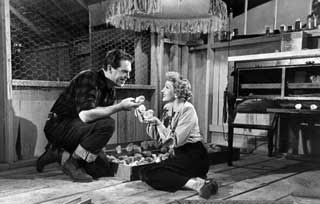 The couple’s new agarian digs prove to be a comedy rich environment, complete with a primitive farmhouse and assorted outbuildings  infested with dry-rot and on the verge of toppling. When Bob and Betty arrive in a rusty pick-up truck so overburdened with cows, chickens and farm implements the very earth shudders beneath it, Colbert can only stare at the dusty tableau of their new lives in stunned disbelief. But, this being a 1940s comedy, despair is soon replaced by can-do spirit, and the film follows the pair as they set up housekeeping - and chicken keeping – in their hardscrabble Shangri-La. 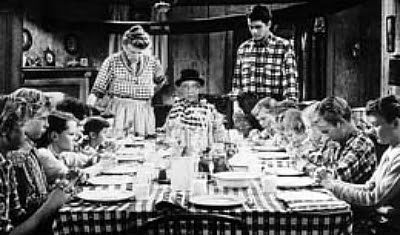 The ne’er do well Kettle family (Marjorie Mains, Percy Kilbride and half the children in SAG) soon appear, and MacMurray and Colbert are no match for this band of unwashed, scene-stealing rustics. And here is The Egg and I’s true historical significance: the birth of a cinematic franchise. The Kettles would appear in nine more films over the next decade, and the outsized hillbilly clan would travel from the Ozarks to Paris to Waikiki before Universal finally decided it had milked the concept dry in 1957. 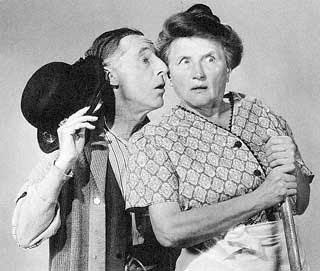 The enduring success of the Kettles sparked by this film had as much to do with sociology as it did with Majorie Main’s superb comedic timing. American life post WWII was transitioning from the wide open spaces of farm life to the tiny, manicured lots of tract homes. While few Americans missed the hardship of agriculture, many secretly wondered if the conformity of the suburbs and the drudgery of the assembly line were really improvements. Films like The Egg and I and the Kettle series gave Americans a chance to laugh at their humble beginnings, yet appreciate the virtues of a homespun, hard knocks style of wisdom. Those who felt nostalgia for large families and arising at 4am to milk the cows could be cured by the antics in these goofy, madcap pastorals. And after a dose of the forgotten pitfalls of rural America, modern life at the widget factory didn’t seem so bad.

Never seen this film, but I remember the Kettles from TV screenings on rainy Sunday afternoons. They were hilarious, and even more fun than these Beverly Hillbillies, we couldn't get enough of.

Yeah, the Kettles were very funny, I loved them when I was a kid. I was thinking when I watched this how much producer Paul Henning must have been "inspired" by this movie. The Beverly Hillbillies were like the Kettles and Oliver and Lisa from Green Acres were alot like MacMurray and Colbert here.
Thanks Bob