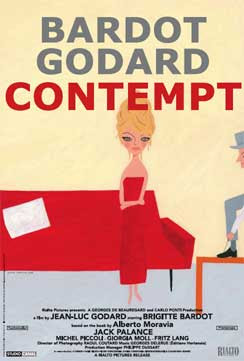 In Contempt, Jean Luc Godard issues a scorched earth assessment of the movie industry and, not surprisingly, finds that hypocrisy and hackery abound. It was a bit of art imitating life, for Contempt was Godard’s first high budget film with big name international stars. So while this young lion of the nouvelle vague was decrying the nexus of money and art, he was busy making a few compromises of his own.

Not that the film suffers for it. Contempt is likely Godard’s most accessible and entertaining work. The story - and there is a story – is simple, clear and, mon dieu, linear in presentation. The casting is eccentric, to say the least, but the collection of well known names and faces is interesting and fun to watch. The ubiquitous Michel Piccoli anchors the film as a free-lance writer named Paul Javal, who has been brought onto the set of a troubled production of The Odyssey by a tactless and tasteless American producer (Jack Palance). The film’s director, Fritz Lang (yes that Fritz Lang…portraying himself) has been delivering footage that, in Palance’s mind, doesn’t have nearly enough sex and violence. Palance hopes that Piccoli will rewrite a few scenes of Homer’s classic and make the epic tale a bit more popcorn-friendly. 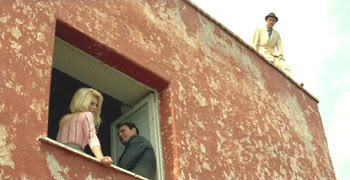 Traveling with Paul is his new wife Camille (Brigitte Bardot), a woman of such intense sensuality she seems to literally float through the air. Palance eyes her like a hungry wolf, and begins to see an association with the Javals as a way of fulfilling all of his needs at once. 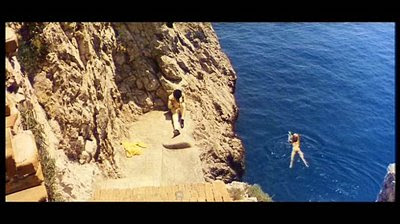 Godard is quite frank in his allusions to the supreme and overriding power of money in his characters’ motivations. Palance is deathly afraid is losing it, and launches into Lang with a vicious tantrum peppered with film cans tossed into the air. Surprisingly, Lang just sits there and takes it with an air of bemusement. The rich successes of films like Metropolis and M were many years ago, and the legendary but aging director needs this job. Piccoli, initially appalled by Palance’s ideas, begins to see this assignment as a way of paying off his flat, and setting his marriage to Bardot on solid financial footing. 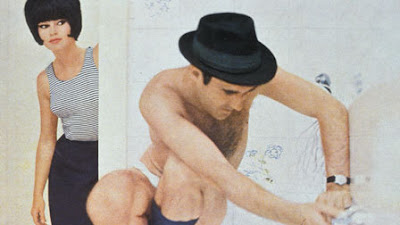 Ironically, it’s the artists in this film who seem to get the least joy out of life. Lang sullenly goes about fulfilling his contract with all the enthusiasm of a man waiting for a bus. Piccoli attempts to grin and bear his unsavory task, but finds his wife most unappreciative of his artistic sacrifice. Palance, on the other hand, barrels through life fueled by his desire for money and Bardot. Speaking of Bardot, Godard manages to get her naked as often as reasonably possible, although according to the director it was not nearly enough to satisfy his Italian producers.

But ultimately this is a Godard film. And to drive home the point, the middle section of the film is comprised of a lengthy sequence filmed in the Javals' fashionable Roman apartment, where Piccoli and Bardot spend an afternoon expounding on philosophical abstractions. The look and feel of this extended set piece is classic Godard and seems almost like a film within a film. Godard even goes so far as to have Bardot don a short haired brunette wig, which makes her eerily resemble Anna Karina, Godard’s muse and favorite leading lady of this period.

The blu-ray disc has a number of interesting bonus features, including the director’s reactions to screening the film 45 years later. Plus, there’s a conversation between Godard and Lang filmed in the 1960s where Godard sheepishy admits that he doesn’t know how to film action scenes in the Hollywood style; using stuntmen, wrecked cars and so forth.

Contempt is considered Godard’s version of 8 ½ or Day for Night, i.e. a great director’s internal and slightly indulgent musings on the true nature of his craft. But Godard’s scope is wider, and forcefully makes a point about how western culture has managed to transform virtually everything into a commodity; whether it’s art, ancient history or Brigitte Bardot’s shapely tuchas.

The poster is wonderful. The film was shot at the island of Capri. I once did a tour there to get a glimpse of the modernist house where Piccoli and Bardot live in. I think it is one of the most beautiful houses in the world. This house built on a windy and barren cliff and overlooking the Mediterranean Sea, was designed and owned by author Curzio Malaparte. As a good communist, he left it after his death to China. We only could get a glimpse.

One of his finest films. And yes, one of his more accessible films. Along with Weekend and Alphaville one of my favorites of Godard's.

Great review, David! I haven't seen this film yet, but I am going to downloading right now!!! ;)

Bob: You actually saw that house? Amazing. I was going to mention it in the review but couldn't find any info on it. So it belongs to China now. You'd think they would want to open it up to "all the people" :)

Lemmy: Yes, Contempt is definately among my fave Godards as well. I love Alphaville and am alternately fascinated and repulsed by Weekend.

Mireia: Thanks, and I hope you will review it. You always have interesting insights into films.