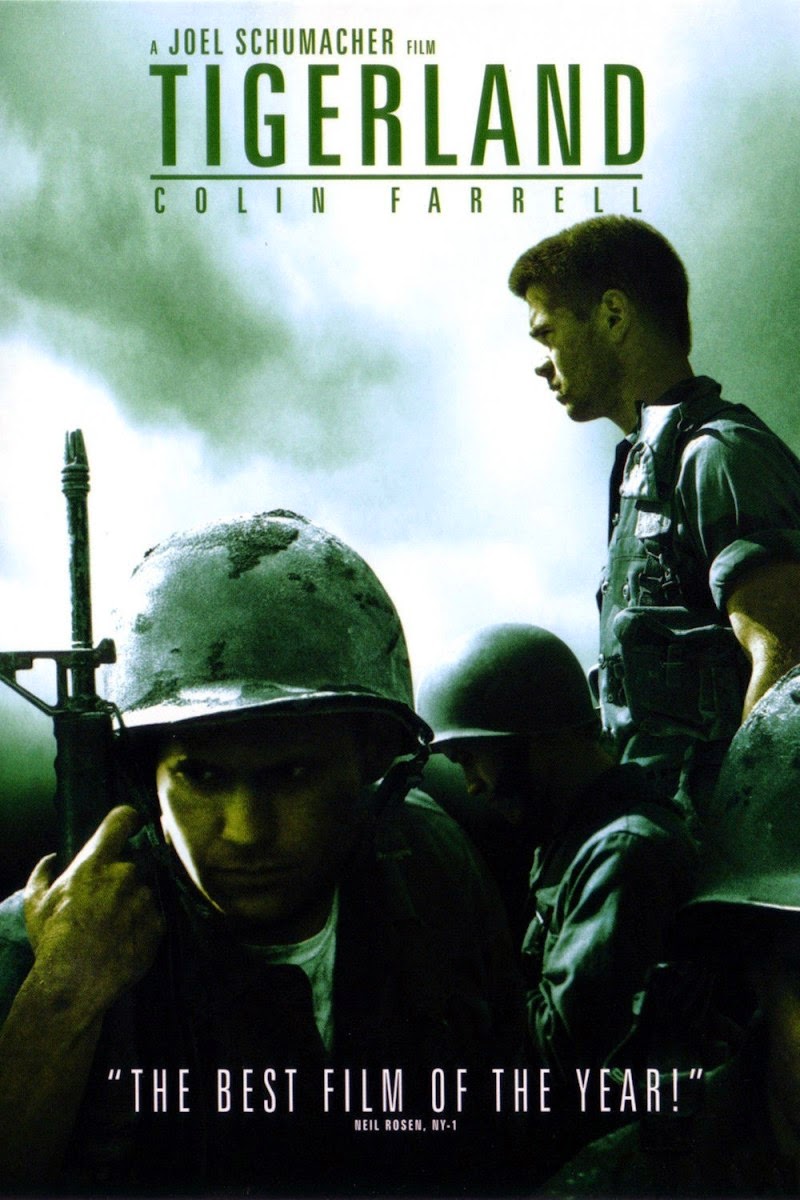 Produced in 2000, Tigerland appropriates the structures, styles and symbols of the great Vietnam War films, and in return delivers a safe, shallow popcorn flick with a distinct made-for-TV feel; a sort of grungy, profane Lifetime movie for guys. Set in 1971 at Fort Polk, Louisiana - the self proclaimed second worst place on Earth - the film follows a company of grunts, largely draftees, through the intense rigors of basic training, leading to a harrowing week of simulated combat in a backwoods jungle swamp. Along the way, the viewer is treated to a variety of war movie clichés, strangely shifting photographic styles, heavy handed manipulations and shaky rationalizations. Ironically, the movie has no shortage of conviction and, like Fort Polk, seems to exist in a universe of peculiar logic and trumped up rules and regulations, without regard for any real world beyond its own sprocket holes. 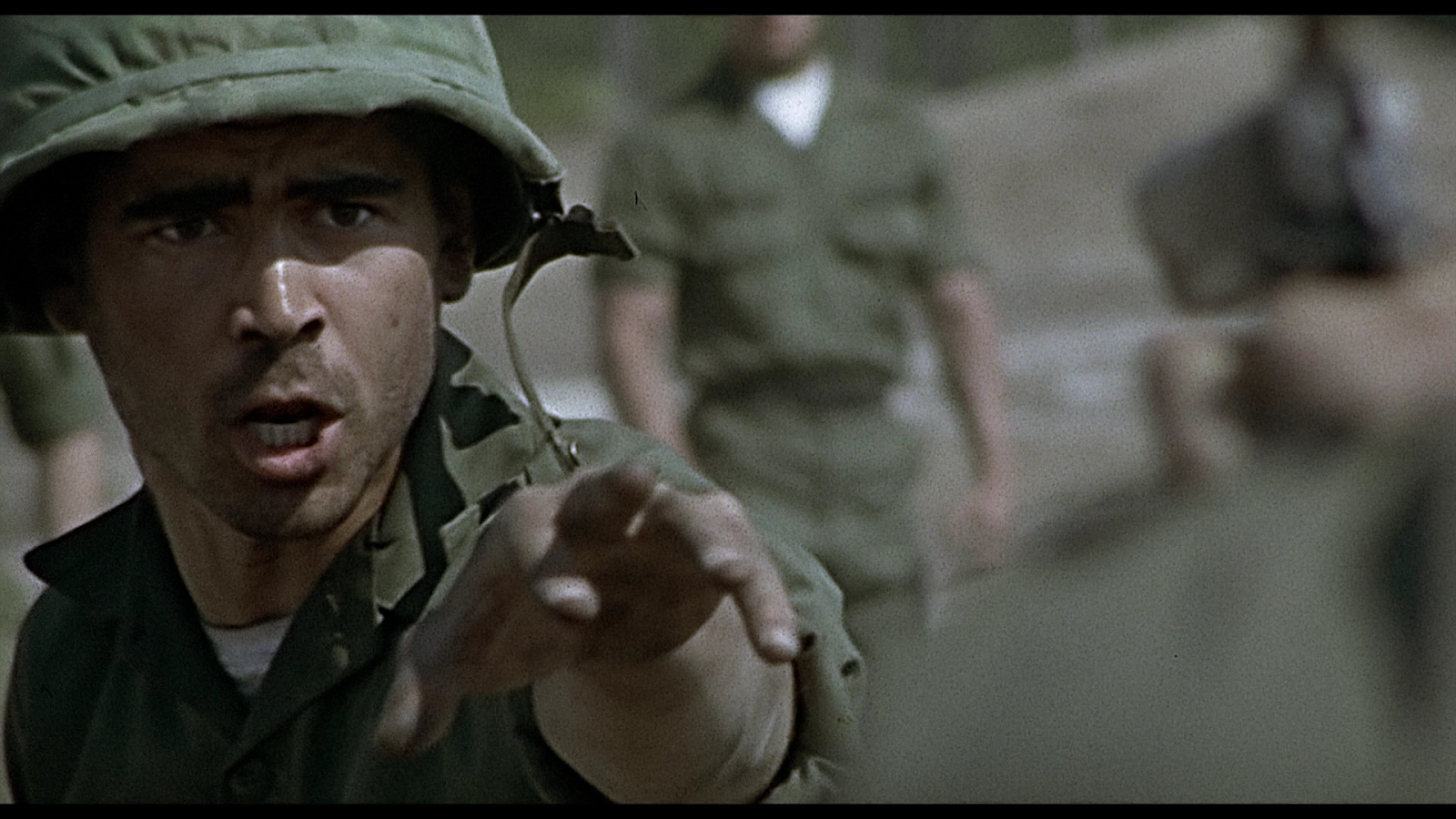 Directed by Joel Schumacher, known for brisk, engaging entertainments that flirt with the edges of serious social issues, Tigerland focuses on the insubordinate exploits of Private Bozz (Colin Farrell), a free spirited conscript from Texas who, thus far, appears to have spent the majority of his basic training in the stockade. His hunky sidekick Paxton (Matthew Davis), fellow grunt and aspiring writer – these types of movies always have an aspiring writer somewhere in the mix – serves as a gee whiz, awestruck foil. 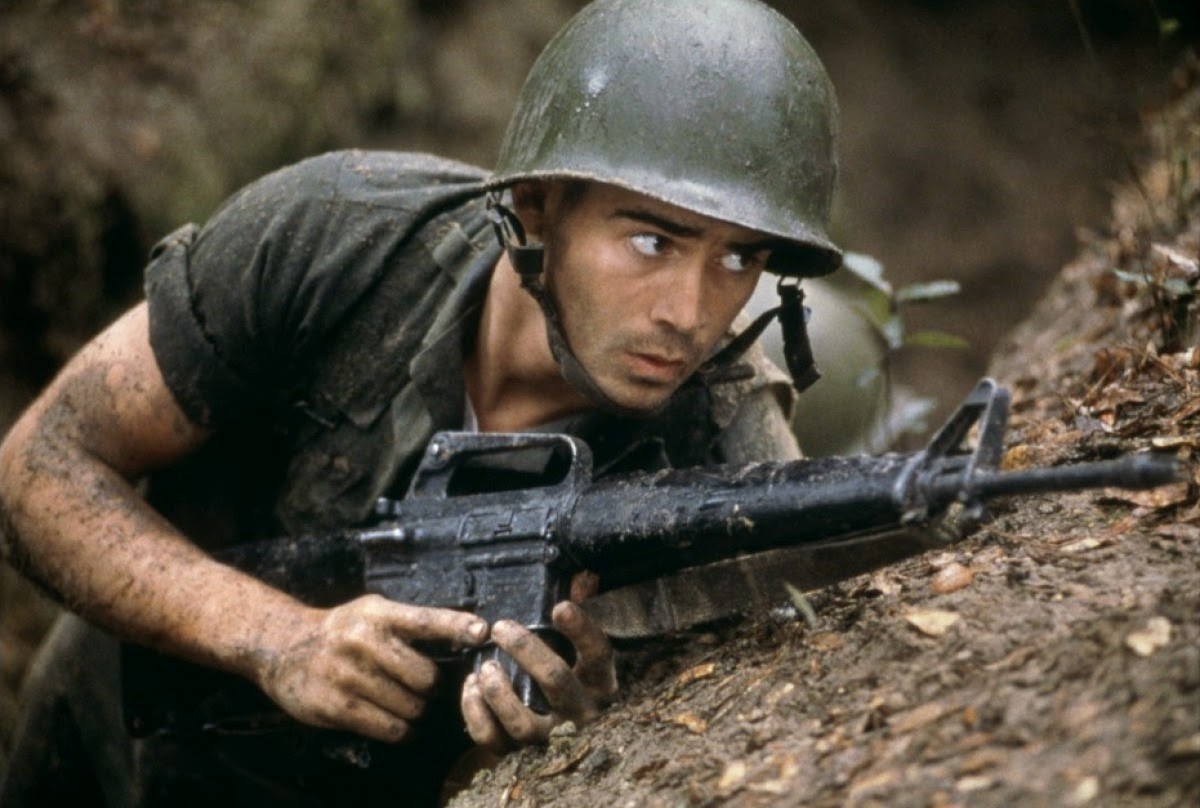 And Farrell is worthy of awe. In the year 2000, fresh from the set of the popular BBC series Ballykissangel, Farrell stepped in front of Tigerland’s cameras for his American debut, and never looked back. His performance is taut and spare with every word, glance and movement sharply homed into Bozz’s rebellious soul. Farrell’s vocal evocation of Texas is credible and consistent, and overall the performance packs so much charisma that when the script asks us to believe Fort Polk’s hard-ass D.I.s put up with Bozz’s antics because he’s “a natural born leader”, it’s only moderately preposterous. 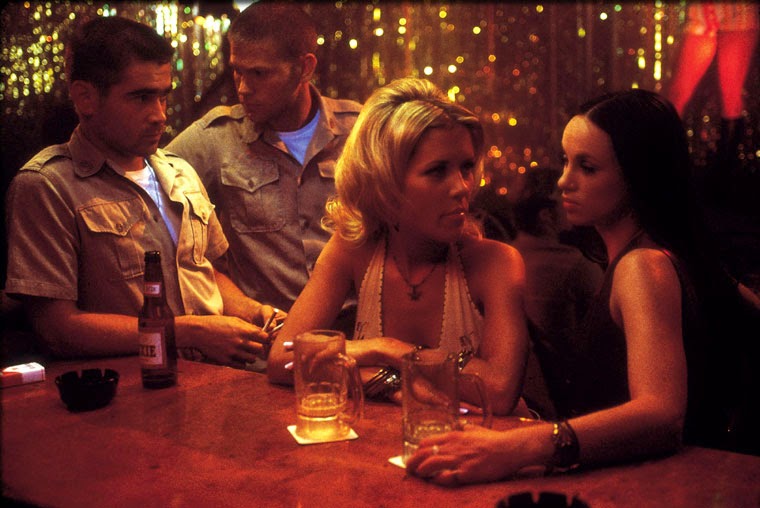 If only the same could be said for the balance of the proceedings. Early in the film, Farrell is released from the brig just in time to go AWOL for the weekend (what?), and follows his fellow maggots into town for some well earned debauchery. At a bar apparently decorated by voodoo practitioners, he and Paxton gain the attentions of two local “born and bred” sluts, but the girls’ Ohio-flat accents have not a trace of bayou drawl. After the inevitable schtupping – which Schumacher depicts with gratuitous sweaty, orgy-esque athleticism – Bozz and Paxton have a deep, tender – and quite homoerotic - discussion of Army life in the buff, while their dates clamor to be taken to breakfast. 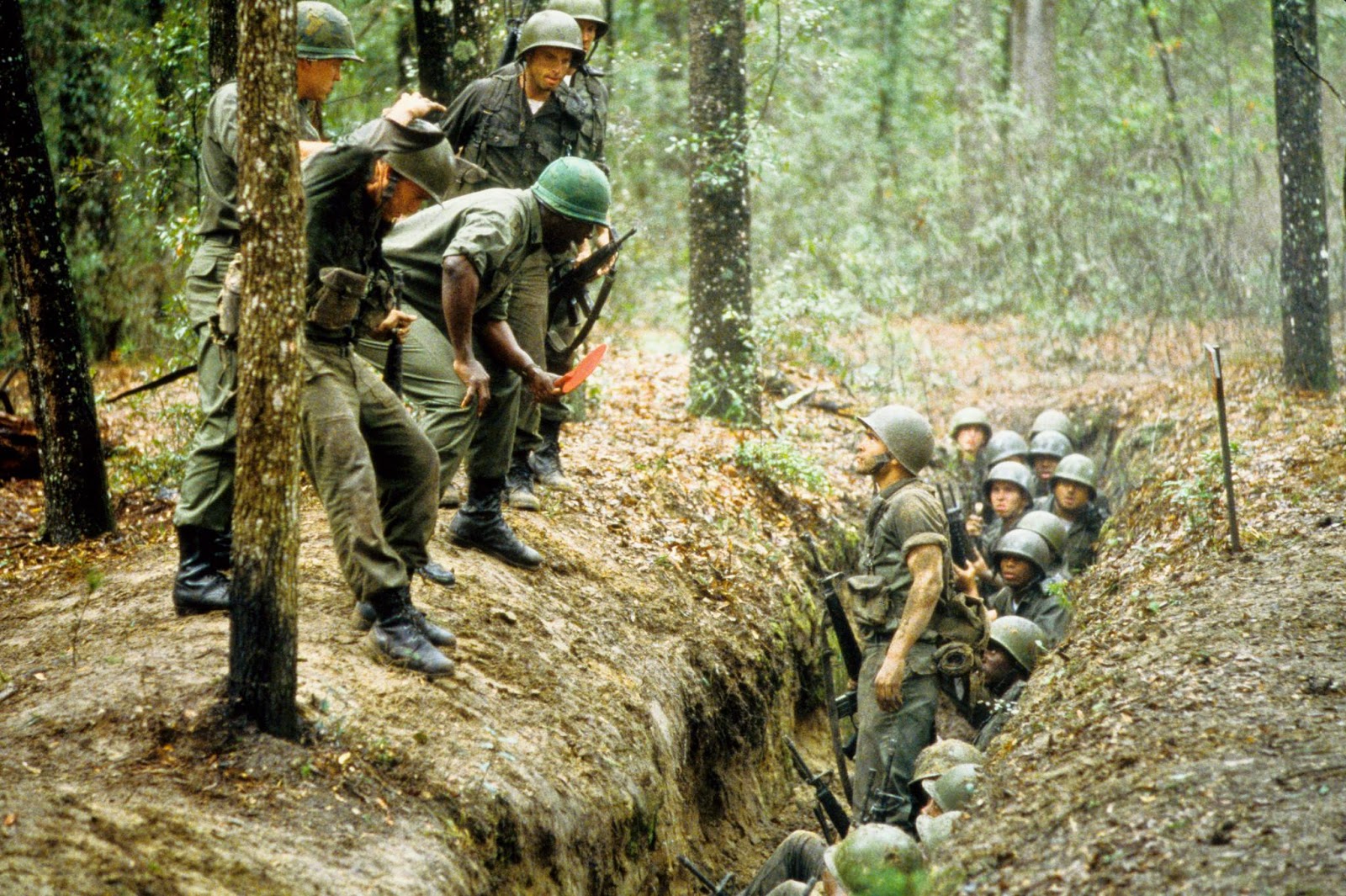 Back at the base, Michael Shannon, proving that he could easily steal a movie even back then, instructs the trainees on methods of torturing Vietcong prisoners using radio batteries clamped to genitalia, and Bozz is so appalled he simply walks away from the lesson in favor of a woodland stroll. When confronted by the livid Sgt. Landers (Afemo Omilani), Bozz’s quiet demeanor diffuses the situation, and the men end up sharing Marlboros and civil discourse. After going to great lengths to establish Ft. Polk’s atmosphere of brutal discipline, Schumacher’s kumbayah moment seems outrageously contrived; something better suited to an episode of Hogan’s Heroes than any serious depiction of infantry training. 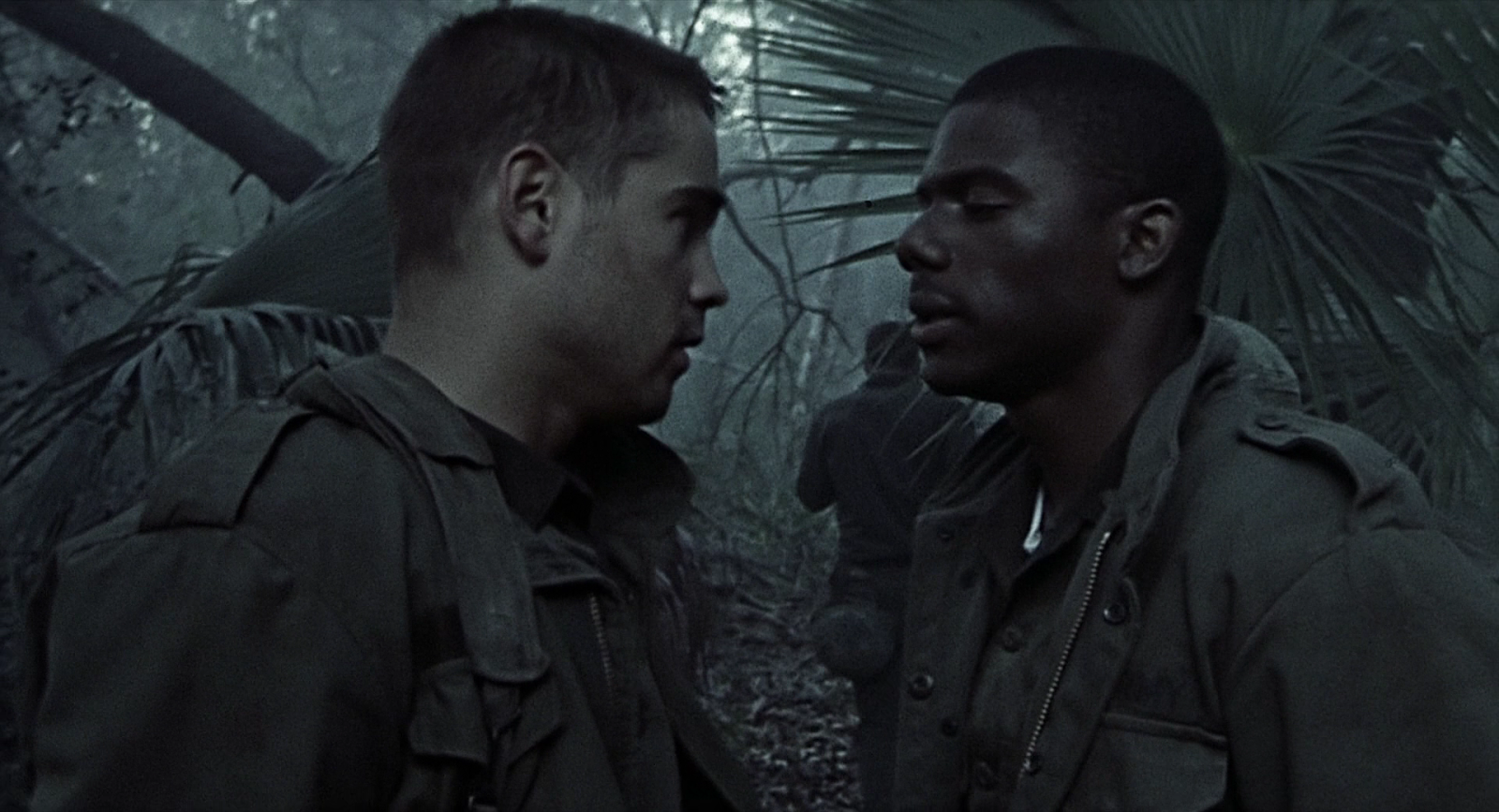 Race relations come to the fore when a tight-knit group of black draftees are constantly harassed by a stereotypical gung-ho bigot named Wilson (Shea Whigham). Schumacher is quick to use these incidents to establish the mentally unbalanced Wilson as the film’s villain, but never addresses this important issue in any meaningful way. None of the black soldiers are developed as memorable characters and their only narrative contributions consist of serving as victims. In a tacky addition of insult to injury, Schumacher includes them singing the film’s closing theme in a Boyz II Men style a cappella. 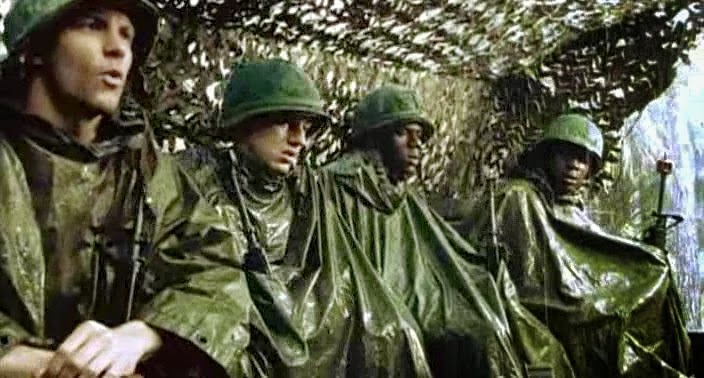 Tigerland, which until now had borne a passing resemblance to Full Metal Jacket, switches stylistic gears for the big finale – the week of simulated mud bog warfare – and becomes a sort of road company Apocalypse Now. Schumacher lays on the atmospherics with a trowel, with smoke, torrential rain and the ghostly shades of soldiers in ponchos adding to the forbidding gloom. Composer Nathan Larson breaks out the trusty Korg for creepy synth licks that are more than a mere homage to Coppola’s masterpiece; they’re virtually a sonic recreation. The film attempts to score some anti-war relevancy points in the late stages, as Paxton derisively mutters that a vicious training exercise is “just like My Lai”, but Schumacher’s heart isn’t in it. It’s clear he wanted to make a middlebrow war adventure with lots of sweat and dirt and guns and helmets and things and, like his assemblage of grunts, he largely achieved his objective. 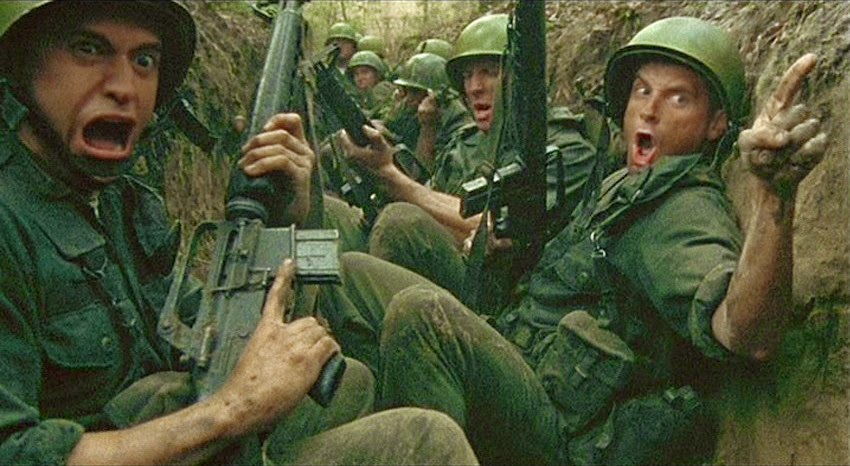 Tigerland is one of those films that begs the question “why?” It treads familiar territory, adding nothing new to the impressive vault of Vietnam films already in existence. It is not in the league of the classics of the genre, and while it attempts to tell a smaller scale story than, say, Platoon, it doesn’t even achieve that in any memorable way. But there’s no such mystery about the reason for this blu-ray release; it’s clearly an attempt to cash in on the popularity of Colin Farrell. And there’s nothing wrong with that. Indeed, his American debut is a performance of charismatic splendor, and deserves every effort to rescue it from obscurity.
at January 29, 2015