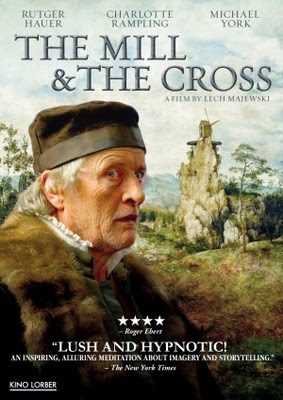 The Mill and the Cross is an attempt to get deeply into the creative mind by removing the boundaries between artistic vision and objective reality. The film shows us the world – 16th century Flanders to be precise – through the eyes of painter Pieter Bruegel (Rutger Hauer), and gives a flavor of the harsh realities depicted in his allegorical extravaganza The Procession to Calvary, completed in 1564. By means that alternate between mesmerizing and clumsy, director Lech Majewski fills in the painting’s backstory, and creates a bleakly intriguing glimpse into Bruegel’s life and times. Along with an informative art history lesson, viewers will get a vivid reminder that maybe the 21st Century isn’t so bad after all. 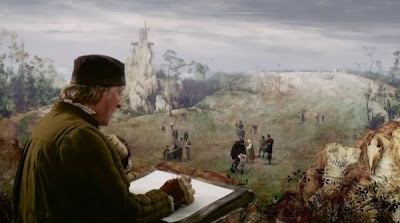 Working extensively with mattes, Majewski imposes Brugel’s visual stylistics on rustic scenes of daily life. This “living painting” technique is tricky – Eric Rohmer tried a similar approach in 2000 with The Lady and Duke, and achieved unwatchable results -  but generally it’s quite successful here, and at times the composites are breathtaking. But Majewski goes a step further, and presents the objective sights and sounds that served as Bruegel’s inspiration. These scenes are among the film’s most effective, and eventually make a few of the complex green screens seem stiff and self conscious. A sequence filmed in a giant grist mill features extraordinary images of early belt and gear engineering, accompanied by subwoofer friendly sound effects that evoke the hellish grinding of condemned souls. 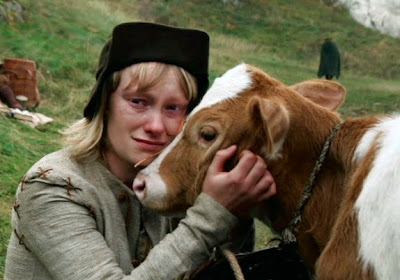 Like life in the 1500s, The Mill and the Cross moves at its own lugubrious pace, offering the space to savor its best moments. Its depiction of daily routines is rooted in stark realism, bringing to mind Olmi’s lumbering agrarian opus The Tree of Wooden Clogs from 1978. In Majewski’s unhurried exposition, we see Bruegel rising at dawn to begin his day of preliminary sketches, soon followed by an impossible number of tow-headed little Bruegels, all rolling out of the crowded bed like clowns from a Volkswagen. Before Mom can begin the breakfast preparations, a flock of squalling geese must first be cleared from the warm kitchen, and they’re not too happy about it. Grim humor, intentional or not, abounds early in the film, as a young couple drag their prized calf up a hillside for a foggy picnic while a musician, in the broadest sense of the word, accompanies them on a rumbling early version of the saxophone. 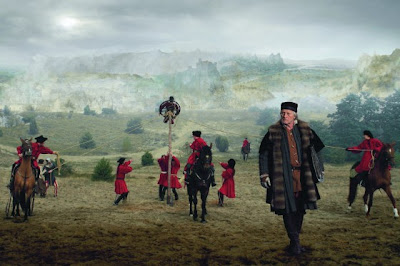 But the imagery is the thing, and Majewski serves up a visual feast not soon to be forgotten. Elements of Bruegel’s vision dominate the film’s second half, and take it beyond a medieval slice of life and into the realm of splendor. Not all the ideas work; the composites of Bruegel discussing the painting with his patron (Michael York) come off as surprisingly flat and studio bound, while a re-imagining of the Passion with Charlotte Rampling as Mary seems more like a producer’s idea than part of Majewski’s larger vision. And ultimately Pieter Bruegel the Elder remains a cipher. In a career laced with eccentric characters, Hauer’s dreamy wandering, sketch pad in hand, ranks as one of his oddest performances. While Majewski was clearly not interested in a standard bio-pic, the later reels lack human interest and the change in narrative scale make the film less approachable; like the stanchions that guard The Procession to Calvary today at Vienna’s Kunsthistorisches Museum. Hidden within the optical wonders of The Mill and the Cross is a great film. It doesn’t quite reach the screen intact, but what’s there is pretty darn amazing.
at March 27, 2012

Another fine review. I'm glad to hear that you enjoyed this as well.

WHAT is that guy doing at the top of that POLE in the last, magnificent, captured picture? Can't wait to see this. Thanks for another lovely review! p.s. You'd enjoy STOLEN, about the Isabella Gardner Museum robbery in Boston. It's electrifying.
- Shoesie

Thanks Bunchie. This one I must see.

Many Thanks Anon1. And thank you for the rec.

Shu: That's the Inquisition's version of crucifixion. You tie a guy to wheel and then hoist him up where birds peck at him. The Inquisitors were not nice people.
You should review Stolen. I know a certain blog that would be interested :)

Thank you for explaining the guy on the pole...I wondered whether somehow Evil Knieval had managed to insert himself into the film...

STOLEN review on its way by hyper-e (I'd already written it!)))

AND: I forgot to tell you how impressed I was at your deliciously perfect use of "lugubrious" in this review. One of my favorite words, rarely encountered.

One day I hope to use lugubrious, gelatinous and substrate in the same review. Oh happy day.