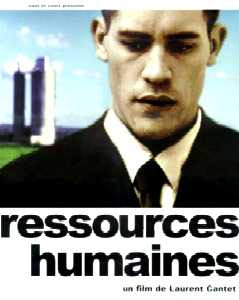 A cold, biting realism permeates every frame of Laurent Cantet’s impressive feature debut. Human Resources is a simple story of young Franck (Jalil Respert), a business school student who returns to his hometown northwest of Paris to intern with a metal fabrication factory. Franck grew up virtually in the shadow of this massive plant, and his father (brilliantly played by Jean-Claude Vallod) has worked there as a union laborer for thirty years. Respert receives his share of razzing from family and friends in the early going, as we quickly realize this child of blue-collar culture is returning as a suspect white-collar anti-hero, and we feel for his predicament. All goes well for Franck with his management overlords, as they assign him to a special research project that, unknown to Franck, will give them decisive leverage over the union in upcoming labor negotiations. 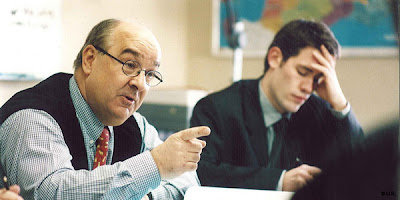 There is palpable tension at home, however, as the more Franck achieves in his new position, the more it isolates him from his father and childhood friends. Clearly the father is quite proud of the son, but neither of them, due to their generational and cultural differences, has the ability to express those feelings to each other. Then one night, Franck discovers a secret letter on a superior’s computer that causes a chain of dramatic and extraordinary events, and ultimately a heartbreaking father-son role reversal. Cantet has done a number of films about the dangers of workplace politics, culminating in the excellent 2008 Palme d’Or winner The Class. Here we see the roots of the intellectually gripping naturalism that has become his stylistic signature. Not as dark as Haneke, and not as documentarian as the Dardenne Brothers, Cantet creates absorbing and highly believable portraits of those who find their work rewarding in ways other than monetary.