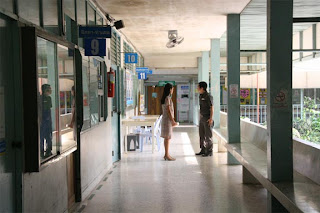 I don't know which is more difficult, describing this film or pronouncing the director's name. Syndromes has no obvious narrative structure; rather it is an assemblage of mise-en- scene vignettes depicting the daily lives of a small group of Thai medical professionals. Each is filmed at a discreet, respectful distance, leaving the audience with only the characters' words and movements as clues to their personalities. No revealing close ups or deep psychological examinations here. Yet these Candid Camera type scenes are surprisingly effective: some are deeply poignant and others are quite funny. 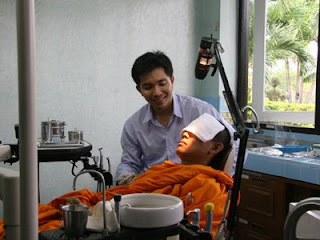 In fact, I can't remember a film I've seen this year that made me laugh more. That being said, this is not a film for everyone. Stylistically, the closest comparison would be a mixture of Eric Rohmer, Yasujiro Ozu and Jim Jarmusch, with a healthy dose of zen philosophy thrown into the mix. This film quietly celebrates attributes virtually non-existent in cinema today: calmness, gentleness and compassion. And all of it told in the meditative music that is the Thai language. A number of influential film bloggers proclaimed this the best film of 2007, topping such stalwarts as No Country for Old Men and There Will be Blood. I must admit, I'm inclined to agree.

Below is a link to the trailer which, although it makes the film seem much bleaker than it really is, will give you sense of the pacing and imagery.

Email ThisBlogThis!Share to TwitterShare to FacebookShare to Pinterest
Labels: Syndromes and a Century, Thai Cinema, Weereasathakul