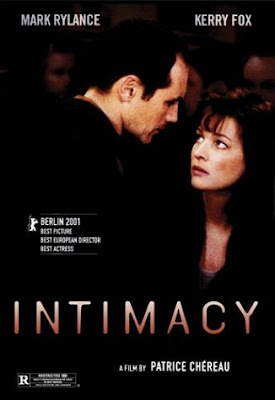 Intimacy is one of those films about a couple who regularly have sex without knowing anything about each other and, as such pictures go, it's not too bad. Kerry Fox and Mark Rylance star as the couple in question and they eagerly grapple and roll about until one day Rylance decides he wants more from his anonymous partner.

A number of effective scenes follow, including one involving Rylance's ex-wife that is both unsettling and heartbreaking. The film has some noteworthy weaknesses. For one, the characters seem to get less interesting the more we learn about them. Another is director Chereau's idea of gritty realism - basically messy apartments and loudly mixed background noise - is quite overstated and gets a bit tiresome before the film is finally done. 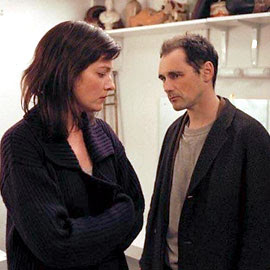 Still, this is a worthwhile watch for those interested in explorations of the mysterious link between sexuality and psychology. Please be advised that this is a sexually graphic film and by the end both Ms. Fox and Mr. Rylance are bereft of anatomical mystery. In fact, I can no longer look at Kerry Fox without blushing.