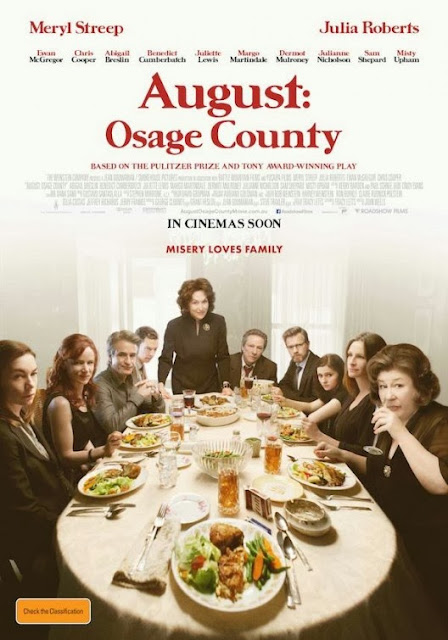 Southern gothic chamber piece, complete with family dysfunction, bitter recriminations, suicide, incest and, worst of all, occasional over emoting. Set on the airless plains of Oklahoma during a heat wave, Tracy Letts’ script - based on his Pulitzer winning play - owes much to the shades of Tennessee Williams and Faulkner, with a dose of Ken Kesey thrown into the mix. Nominated by SAG and the Golden Globes, with surely more noms to come, “August: Osage County” boasts an impressive collection of actors, with Meryl Steep, Julia Roberts, Chris Cooper, Sam Shepard, Ewan McGregor and Juliette Lewis among the long list of notables. In fact, the film’s first half often feels like a sort of All-Star Game for thespians, with each scene adding a new famous face to the proceedings. You can almost hear a PA announcer: “Now batting...Benedict Cumberbatch.”

The story follows a familiar path for these types of dramas, as pill-popping matriarch Meryl - now facing a serious illness - has wrenching knock down drag out arguments with her daughters, in-laws and grandchildren, all of whom she has emotionally damaged in some way. Despite its predictability, the film is well paced and offers several rewarding scenes. Billed as a drama/comedy, overall August: Osage County could have used a bit more of the latter. However, It does have one laugh out loud line: “Ivy, you can’t move to New York. You’re almost 50 years old. You’ll break a hip." 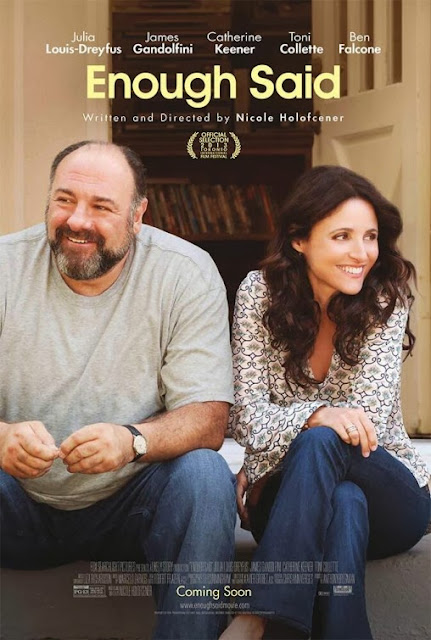 Perfectly serviceable rom-com, written and directed by Nicole Holofcener who has worked on some of the best TV shows around. Here we find Julia Louis-Dreyfuss as a mobile masseuse in LA, whose floundering love life takes a turn for the better when she meets a fellow divorcee (James Gandolfini). Their budding romance appears to be on the right track until Louis-Dreyfuss receives some inside information about her new boyfriend from an unexpected source (Catherine Keener).

Holofcener has obviously made the rounds of LA's singles scene, and many details here have the ring of authenticity. She keeps the proceedings light and agreeable, even through the inevitable romantic rough patches. The film has received Golden Globe and SAG noms chiefly, I suspect, out of deference to Gandolfini's memory. And that memory makes Enough Said something of a bittersweet experience; the realization that an enormous talent was taken from us way too soon. 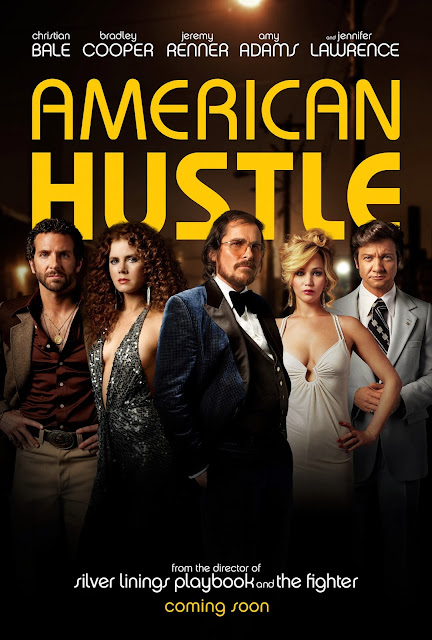 Lots of sloppiness in this movie, which tries to make a feel-good story out of the whole ABSCAM mess. Confusing writing, slip-shod directing…Christian Bale, Louis CK and Jeremy Renner were the only ones who seem to have a handle on their characters. I know it's heresey to be the least bit critical of Jennifer Lawrence, but her accent is all over the place. Bradley Cooper is so madly in love with himself it's just plain nauseating. I thought the damn thing would never end. David O. Russell is not good.
at December 30, 2013

Happy New Year, David - here's to a bumper 2014 of film, and (your) punches landing on target as ever.

Happy New Year to all of you. And Marcheline I figured you'd get a kick out of that :)

Wow
And everyone loves it. I recently saw Russell's "Silver Linings Playbook" and was shocked at how mediocre it was, relative to its reputation. Maybe I'll wait for the dvd on this one.
I rather like Lawrence but more for her earthy aura on and off screen than any particular performance.

In this movie she doesn't stay in character. Acting 101.
Yes everyone loves american Hustle and SIlver Linings Playbook. And they are both crap. Go figure.