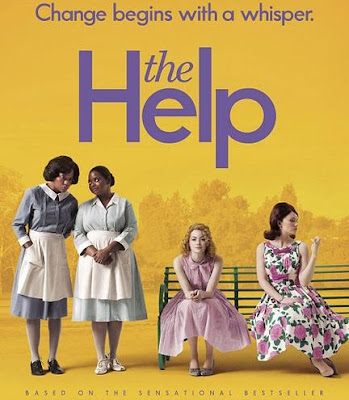 The Help is one of those movies you root for. It has a wonderful cast of impressively credentialed but largely unknown actresses. It deals with an important and endlessly fascinating subject: America’s tortured history on race. The film sits us down at a beautifully set banquet table, where we expect multiple courses of penetrating and profound insights on America’s original sin. Instead, by aggressive wallowing in frothy rom-com aesthetics, the film serves up a cold plate of yesterday’s fried boloney. 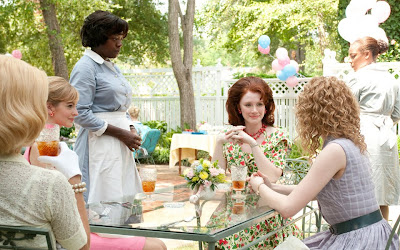 Set in Jackson, Mississippi circa 1963 - the soundtrack blares the Johnny Cash/June Carter duet “Jackson” just to make sure we get it – the film centers on the fragile relationship between a group of 30-ish prisspot former debutantes and their revolving door of black housekeepers. The stark contrasts are drawn in the early going, as the debs lead charmed lives of Junior League and Bridge Club, while their domestic counterparts attend to the drudgery of chicken frying and rugrat supervision. 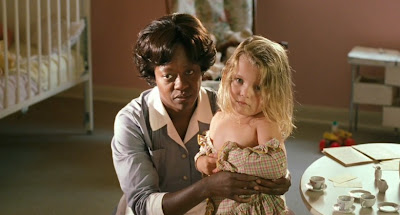 But one such maid named Aibilene (Viola Davis) has lost her sunny Aunt Jemima cheerfulness, and goes about her daily chores under a gloomy emotional cloud. Aibilene’s adult son has recently died, and her only solace from crushing grief is her 3 year old charge Mae Mobley (played interchangeably by twins Emma and Eleanor Henry), who Aibilene showers with a deep love that borders on the obsessive. 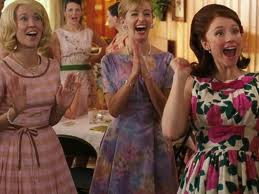 Stylistically, the film often resembles a bourgeois-cracker version of Mad Men, although director Tate Taylor’s lack of attention to detail would not be worthy of that fine TV series. We first meet the majority of the characters during a party at the home of Aibilene’s employer Elizabeth (Ahna O’Reilly), where the idle housewives gossip and cackle like hens, with varying degrees of accent slippage. Taylor’s pale princesses speak an odd patois of Los Angeles-laced Dixie, and at times it’s hard to know if The Help is taking place in Mississippi or Anaheim. 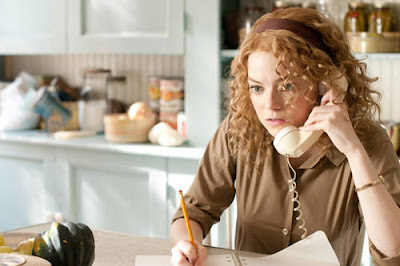 Eventually we meet Skeeter (Emma Stone), Elizabeth’s unmarried friend who Wants To Write, and whose waters run a lot deeper than her faded cheerleader contemporaries. Skeeter has the idea to amass the personal stories of Jackson’s faceless black domestics into an anonymous expose of Southern perfidy, an idea that excites her guilty liberal New York publisher (Mary Steenburgen) to no end. Indeed, there is no brush too broad for Tate Taylor. 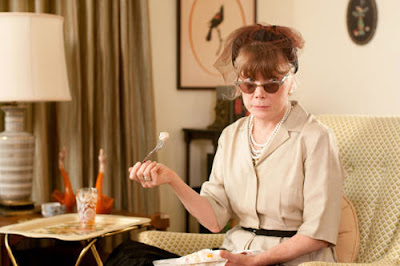 By this time, The Help abandons any pretext of a serious motion picture, and becomes just another hokey flick about Southern female empowerment. The tragedy of Medgar Evers is glossed over as quickly as possible, and becomes simply a means for Skeeter and Aibilene to advance their ambitions. However, if one can ignore Taylor’s sloppiness, there are some enjoyable performances that will make the sit worthwhile. 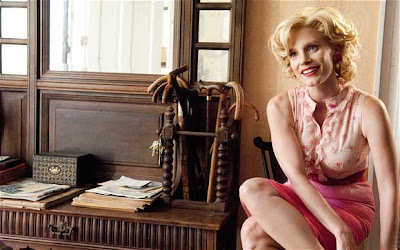 Jessica Chastain displays tremendous control as a white trash nouveau riche treated by the rest of the wives as a pariah, and nimbly walks the razor’s edge in a performance that nearly goes over the top. Yet, as in The Tree of Life, she injects her role with a mystical sensuality that seems to stop time, and here she transcends The Help’s shallow momentum. And, although Taylor only utilizes her character for comic relief, Sissy Spacek has the time of her life as a scene-stealing matriarch in the early stages of Alzheimer’s. 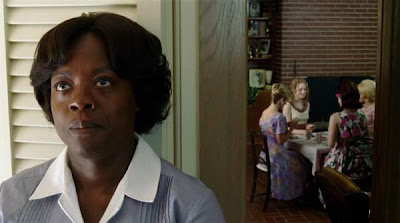 But Viola Davis creates The Help’s most interesting dramatic textures. This is not surprising, for over the years Davis has logged a number of strong, sometimes breathtaking performances; just check out her turn as a traumatized scientist in George Clooney’s remake of Solaris for starters. And, unlike its producers, she seems to understand what The Help is actually about. The story could have been a compelling ode to that generation of Southern slave descendants, born early in the 20th century, who lived their formative years without benefit of civil rights protections or Martin Luther King’s inspirational oratory. 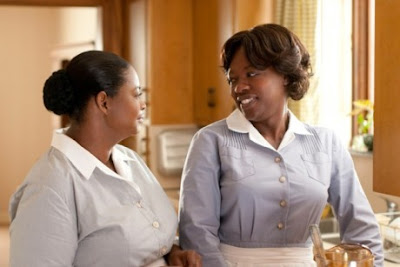 They bravely carved out the best lives they could, given their era’s lack of opportunity, dependant and vulnerable to the caprices of their white employers. This generation would see slow advances from the civil rights movement, but change would come too late to be of much practical effect. If Taylor set out to make nothing more than a glib chick-flick using 1960s race issues as a backdrop – and that’s likely the case – then the film must be considered a success. But there’s the gnawing feeling that The Help leaves way too much on the table.
at January 13, 2012

I guess it all depends on what you're looking for in a movie like this. I haven't seen it yet, but have heard only good so far.

Agreed. There's no denying the movie's popularity. It's still playing at two theaters here in PHX, and it's been out on DVD for awhile.