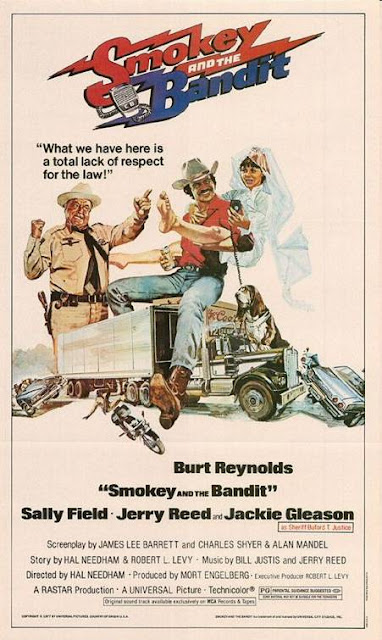 Smokey and the Bandit, 1977’s pastiche of redneck popular culture, remains an unfailing entertainment; its musty and dated narrative arc only adding to its fascinations. Written and directed by Hal Needham, a former stuntman whose recklessness earned him high paychecks and long hospital stays, Smokey and the Bandit is a road picture brimming with flash and crash and loud noises, and is refreshingly unapologetic about it. While some films grapple for a theme, Needham’s Dixie Decalogue is a triumph of rustic clarity; the motion picture equivalent of pork barbeque on a paper plate. 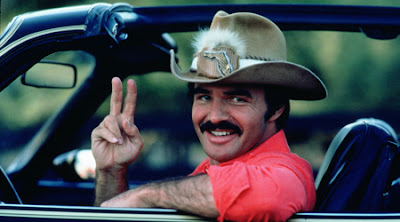 Two truckers named The Bandit (Burt Reynolds) and Cletus (Jerry Reed) are approached at the Georgia State Fair by a couple of early versions of today’s pampered one-per- centers (Pat McCormick and Paul Williams), seeking to have a truckload of Coors beer delivered from Texas in 28 hours. If the Bandit and Cletus are successful, the pair will be paid $80,000. If the delivery is late, the beer will spoil and they’ll get nothing. With Reed and his faithful basset hound Fred following in an 18 wheeler; Reynolds leads the way in a speedy sportscar, distracting doughnut munching traffic cops while the truck and its forbidden cargo slide by unnoticed. All goes smoothly until Reynolds picks up a hitchhiker: a runaway bride with a case of icy feet (Sally Field) fleeing her impending nuptials to the son of a cantankerous Texas sheriff (Jackie Gleason). Taking Field’s flight as a personal offense, Gleason will doggedly pursue the Bandit across the steamy Southeast in a performance that hilariously chews every acre of kudzu along the way. And that’s the movie my friends; those seeking Kieslowski style complexity will have to look elsewhere. 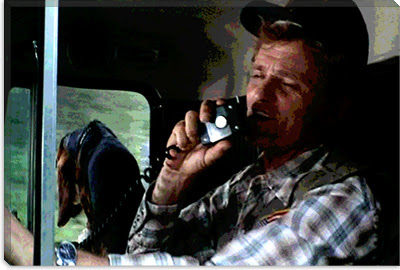 Smokey and the Bandit offers humor aplenty, much of it provided by colorful trucker slang. Roadside diners are called “Choke and Pukes” while motorcycle cops are known as “Evel Kneivels”. The late Jerry Reed appears to be having the time of his life as an outsized caricature and he also composed the film’s hit theme song. Not bad for an erstwhile guitar picker who grew up in foster homes. The comedic possibilities of unsafe driving are exploited to the extreme, with Reynolds’ flashy conveyance breaking the bounds of gravity on several occasions. Despite the film’s copious displays of confederate flags, Needham takes great pains to compensate for America’s original sin. As the saying goes, some of the Bandit’s best friends are black. An African American undertaker leading a lengthy procession gleefully provides cover for one of the Bandit’s narrow escapes, while a small town sheriff (George Reynolds) is the film’s most professional and virtuous lawman. 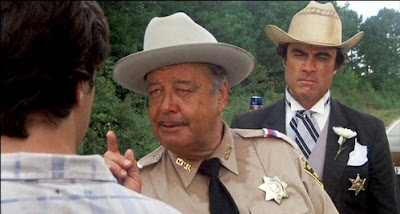 But it's Gleason’s turn as Sheriff Buford T. Justice that gives the film its signature style and lifts it beyond its B movie roots. Here, Gleason’s unique, indeed baffling, ability to retain his personality while dead-center nailing his characters is a source of wonder. He was a sort of Meryl Streep in reverse, not sublimating his native persona, but using it as a counterpoint to enrich his performances. Whether it’s the elegant, taciturn Minnesota Fats from The Hustler, or this role as a overblown egomaniacal abstraction, Jackie Gleason delivered with chops born of unstoppable force. In Smokey and the Bandit Gleason has the southern-fried speech patterns and drawling body english down so perfectly it seems impossible he was the product of a broken home in Bedford-Stuyvesant. 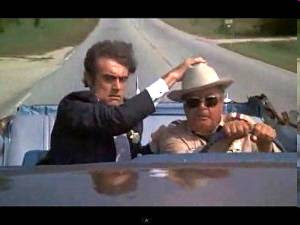 Despite its simplicity, remaking Smokey and The Bandit would require colossal tweaking today, although I’m sure reboot-happy Hollywood has considered it. With Coors Beer joining the ranks of nationally distributed swill, the idea of traveling 1200 miles for a cold one is the height of absurdity. Frankly, most folks I know wouldn’t go across the street for it. The CB would be replaced by the iPhone and text messaging, and the Bandit’s Garmin would likely have a meltdown trying to recalculate the route after his plethora of wildly evasive maneuvers. Atlanta TV stations would fill the air with helicopters; their hi-def cameras trained on Reynolds’ every move. And cable news crews would be stationed at every rest stop, with Jim Cantore predicting fine weather for the rest of the journey, although severe storms are always a possibility this time of year. 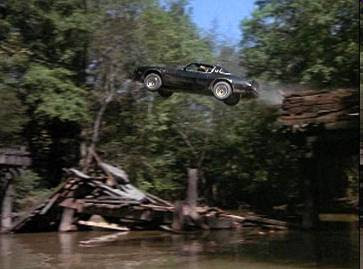 Woody Allen’s Annie Hall was also released in 1977, and in many ways the two films are cultural doppelgangers. While Allen’s whiny protagonists obsessively navel-gaze in midtown, 900 miles away the Bandit was knocking down mailboxes and jumping over washed out bridges in his speeding Trans-Am. While Allen and Diane Keaton attempt to corral lobsters at a million dollar Hamptons beach house, Reynolds and Field retreat to a roadside creek for some alfresco whoopee amid the weeds. The two movies starkly established the red state/blue state schism – although those terms had yet to be coined. And American politics is still driven by this regional divide; fanned to a fever pitch in subsequent decades by unscrupulous politicians and talk radio blowhards. 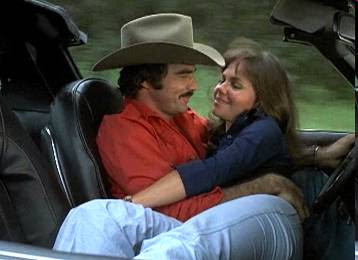 All art forms are capable of entertaining, amusing and elevating us, but cinema has a unique ability to be a living form of archeology. Deeply rooted in the CB radio craze of the 1970s, Smokey and the Bandit captures a specific zeitgeist, even if no character in the film knew the meaning of the word. Finally breaking from chains of poverty, the American south was on its way to becoming The New South, a powerful and influential economic engine based on banking, non union labor and relocating New Deal retirees. There was a newly elected liberal President from Georgia, and while the nation would eventually sour on him, the early days of the Carter administration were bright with optimism. Smokey and the Bandit is a straightforward pleasure with flashes of meaningful subtext. 35 years ago, it depicted a Dixie of unity, fair dealing and respect.  Let’s hope the cynical leaders who have sought to divide our nation along lines of fear have not rendered that dream as dead as the CB radio.
at March 04, 2012

I hope you don't hate me for this; I like Annie Hall but I LOVE Smokey and the Bandit. I hope it says something positive that I can appreciate both.

I just read Hal Needham's autobiography. It was pretty interesting.

The casting in Smokey and the Bandit is perfect, and that's what made it such a classic. Reynolds, Fields, Gleason and Reed couldn't be replaced by anyone else.

Thanks Robert. I love Smokey (and Annie Hall) too. I even had the soundtrack on LP.

Oh and thank you Anon :)