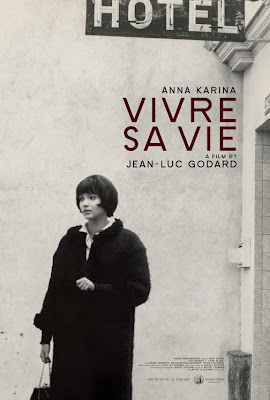 Jean-Luc Godard’s Vivre Sa Vie is a simply told and clearly presented story that features none of the pickly irritations often associated with the director’s work. Young Nana (Anna Karina), a lackadaisical clerk in a record store, has a sudden and crushing need for 2000 francs, and begins to consider the oldest profession as a means of quickly settling her debts. A would-be model and actress, Nana’s day-to-day life in the seedy, bohemian Paris of the 1960s consists of liasions with a number of young men who feel they are entitled to intimacy for the price of a movie ticket or a cup of coffee, and Nana soon sees a moral equivalence to life on the streets. The chief difference being that the professional girls are better paid. 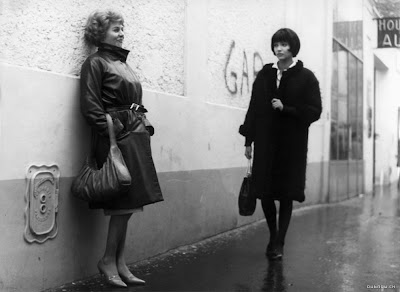 Godard uses prostitution as an obvious symbol for capitalism as a whole, and manages to administer a few thinly disguised doses of Marxist theory, albeit in a much more restrained and palatable manner than the blatant soapboxing found in his later works. The nexus of religion and government, particularly as practiced in the west, has always been one of the director’s favorite targets – he would have had a field day in America – and here, Nana’s eventual pimp chastises her for her “Catholic” answers to philosophical questions, while a nearby police raid is dismissed as “politics”. 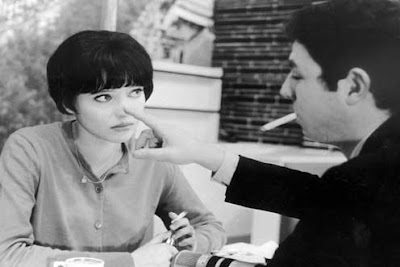 As Nana begins to build her clientele, she is given an orientation lecture in the dos and don’ts of streetwalking that sounds like a primer on free enterprise from Harvard Business School. The job of the prostitute is “to make as much money as she can” and it’s her moral duty to “accept anyone who can pay”. She is told that through rapid turnover she can “turn up to 60 tricks a night”; a production quota that will require around-the-clock labor. 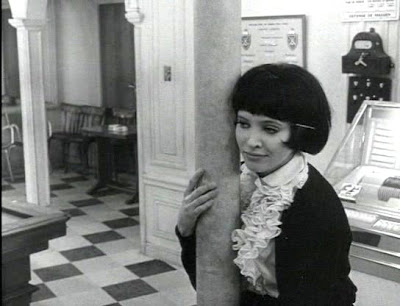 The formerly blasé Nana seems oddly invigorated by her new employment, and we are amused by her heavy-handed attempts to be alluring. Subtle advertising is not Nana’a forte, and she flutters and sashays to virtually every man she meets. Karina’s jazzy dance in a pool hall is one of the film’s highlights. Equal parts suggestive and pathetic, the dance fails to impress the small group of pimps and thugs in attendance, and is symbolic of Godard’s attitudes on the plight of labor versus those who control the means of production. 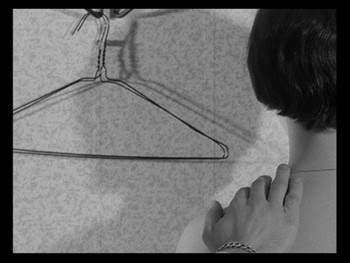 Godard’s ability to create interesting images from commonplace elements is unquestionably his strong suit. Even if you don’t buy into everything the director is selling, Vivre Sa Vie remains a beautiful film to watch. The B/W French films of this period all have a unique contrasty, yet diffuse look to them; as if we are seeing the unspooling of a distant memory or dream. Whether it was the water at the Éclair film lab or the wintry gray light of Paris, the subtle murky textures of these early 1960s films have never been duplicated. The Criterion Blu-ray edition is absolutely first rate, capturing Godard’s vision in delicate detail. There are a number of interesting special features on the disc, including a French TV documentary on Parisian hookers from 1959 that contains plenty of unintentional humor. 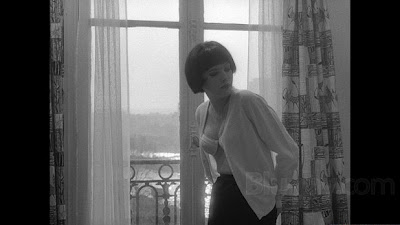 Sometimes after a Godard film you just want to slap him. And while Viver Sa Vive loses a bit of steam on the way to its nihilistic conclusion, here, unlike many of his later films, Godard manages to make his points in an appealing way that causes you to consider his arguments rather than summarily dismiss them. 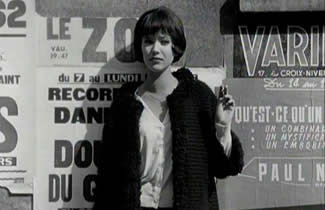 It’s an approach that would have served the director well had he followed it throughout his long and productive career. But then Godard – who at age 80 is still plugging away at the free enterprise of filmmaking - wouldn’t have been Godard.

Oh, my. You certainly haven't lost your touch, David. Can't wait to see this film. Godard sometimes drives me nuts, embodying as he does that special French je ne sais quoi...and excuzay moi now, gotta put this in my queue. Someday I will tell you about my name. Cheers! #511

Thanks Five One One. I think you will find Vivre sa vie kind of a hoot from the historical perspective. Not a great film...but not a grating film either.