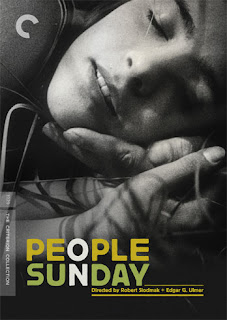 Scholars and fans of cinematic ephemera will be keenly interested in People on Sunday, a German silent film from 1930. Produced during a rare period of calm in that nation’s early 20th Century history, People on Sunday was created by a dream team of gifted young filmmakers – Curt and Robert Siodmak (directors), Edgar Ulmer (producer), Billy Wilder (screenplay), Eugene Shufftan (DP) and Fred Zinnemann (Assistant Director) – all of whom would eventually immigrate to America and find varying degrees of success in Hollywood. In many ways a forerunner of today’s independent films, People on Sunday was created on a microscopic budget – mainly with money borrowed from relatives – and features amateur actors essentially portraying themselves and performing their real-life occupations. This undercurrent of realism was something of a revelation in 1930, and the film was rewarded with glowing notices and packed theaters. 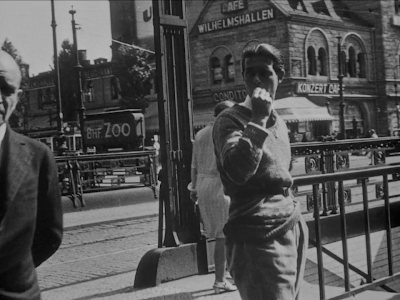 And neither will contemporary audiences be immune to People on Sunday’s charms, as the film’s unique blend of dramatic and documentary elements offers an intriguing look into everyday life in Berlin 80 years ago. Even those who typically avoid silent films at all costs – your loyal reviewer among them – will find surprising pleasures within its modern technical and thematic flourishes. The filmmakers maintain a steely vigilance against the two main drawbacks often found in silents – bad makeup and bad acting – and imbue People on Sunday with a degree of naturalism unique for its era. No, it’s not quite the raw understatement of the Dardenne Brothers, but it’s not the laughable hysteria of D.W. Griffith either. 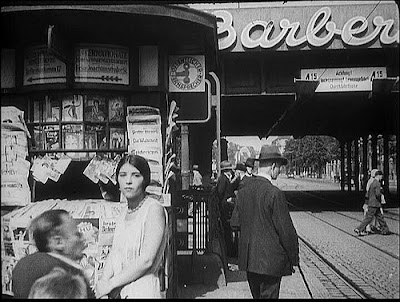 Billy Wilder’s story revolves around a pair of tomcat bachelors in their late twenties: Wolf (Wolfgang von Waltershausen), a wine merchant and Erwin (Erwin Splettstober), a taxi driver. The two men are old friends and have been known to enjoy a few Krombacher Pils together from time-to-time. Erwin has a live-in girlfriend, the extremely torpid Annie (Annie Shreyer), whose prototypical coach potato lifestyle is causing severe friction in the couple’s unwed bliss. With no such entanglements, the aptly named Wolf keeps a sharp eye out for attractive young frauleins, and one day on a street corner he strikes up a flirty conversation with the willowy Christl (Christl Ehlers), and the pair eventually brave the assortment of flivers, horse carts and meat wagons that comprise Berlin’s bustling traffic, and repair to the bar across the street to get better acquainted. 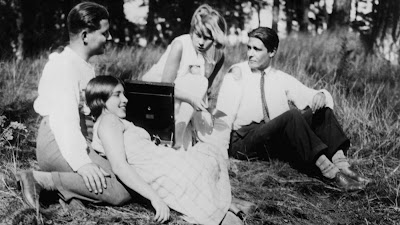 Wolf and Erwin, and apparently everyone else in Berlin, enjoy spending their Sundays at Nikolassee, a popular recreational wilderness on the outskirts of town. Wolf has invited Christl to join them, and she thoughtfully brings along a shapely blond friend (Brigitte Borchert) who soon makes Erwin quite glad his slothful Annie has overslept. Essentially the balance of the film is devoted to the foursome’s antics during their day in the sun, including some brave swimming in an icy lake, a hastily thrown together picnic, and a short trip on an odd looking paddle boat apparatus. There’s also a little heavily implied al fresco schtupping as Wolf develops a preference for Brigitte and the two wander off into the woods while Christl and Erwin peacefully doze. This sequence is a bit a shock for a film from 1930, and is one of the reasons the film was barred to the under eighteen crowd during its initial theatrical run. 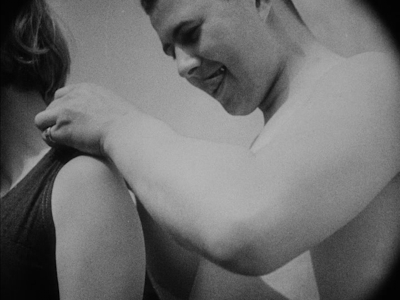 Throughout the film, the narrative thread is interspersed, one could say interrupted, by documentary scenes of ordinary Berliners engaged in their daily lives. While these shots often play as non-sequiturs, there is an appealing casualness about them and, in some ways, they construct a richer and more fascinating scenario than the unfolding main story. It’s fair to say that these unstaged sequences accounted for some of People on Sunday’s popularity with cinema goers; no doubt some folks bought tickets in hopes of seeing a brief glimpse of themselves – or perhaps Uncle Hans - in one of the film’s many crowd scenes. This technique is continued once the film’s setting shifts to the lake, and viewers are treated to a cornucopia of cutaways featuring well-fed bathers in a variety of unfortunate swimwear. 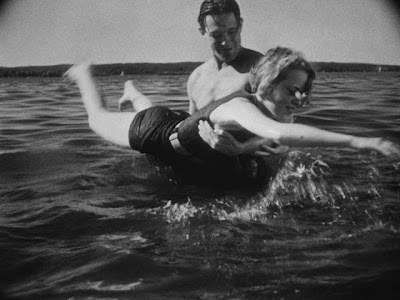 From today’s perspective, it’s impossible to watch a film depicting the relaxed, cheerful Berlin of 1930 without thinking of the terrors that awaited these unsuspecting innocents. Ironically, those terrors were a great boon to the American film industry, as the bright young talents behind this film were forced to escape to Hollywood for their very survival. When viewed within its historical context, People on Sunday reveals itself to be a work of innovation, great technical skill and both a pleasure and a challenge to the audiences of 1930. In ways great and small, it’s a modern film trapped inside an ancient and obsolete cinematic body.

Sublime post! This is why we read this blog - never knew anything of this. And as you say, seen now, the ultimate dramatic irony.

That would be "this looks really interesting!"... if my hands had been on the right keys.