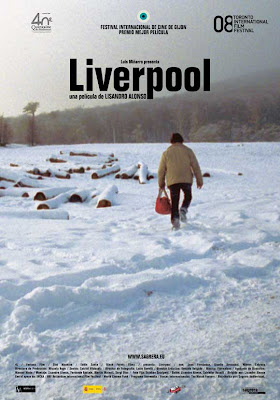 Lisando Alonzo’s Liverpool starts with a screen full of acknowledgements. Among those thanked is director Carlos Reygadas, and that’s a strong tip off as to the type of film we can expect. Alonzo is a true believer in the new school of austere naturalism as practiced by Reygadas, Fernando Eimbcke, Nuri Bilge Ceylan and others. This style of cinema owes much more to Aki Kaurismaki and Jim Jarmusch than it does to Orson Welles or John Ford, and it’s a style that has sharply divided audiences. While some appreciate these films’ quiet and delicate textures, others run screaming from the theatre, dismissing them as sadistic experiments in sensory deprivation. 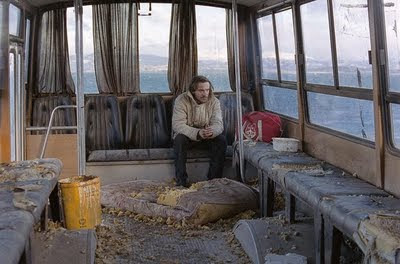 Liverpool won’t do much to heal this rift. While Reygadas imbues his films with undercurrents of mysticism and Eimbcke injects a dry ironic humor, Alonzo’s production reaches new, and to some viewers appalling, levels of starkness. Yet, to those open to the experience, Liverpool is a film crammed with emotion and humanity waiting to be mined just beneath its barren outer crust. 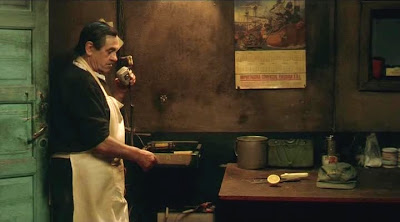 A 40-ish merchant seaman named Farrel (Juan Fernandez) decides to take shore leave for a couple of days while his freighter is docked at Tierra del Fuego, and reconnect with his family who live in a tiny logging village nearby. Eventually, fragments of Farrel’s backstory emerge, and we realize that he has spent most of his life immersed in the droning, grungy routine of life aboard a cargo ship, and this will be his first visit home in decades. Through an arresting style of objective impressionism, Alonzo makes us feel Farrel’s trepidation at the prospect of this reunion, as well as the biting, icy winds that greet him as he disembarks. There’s a fearful sadness to the chorus of crunching sounds as Farrel trudges through the snowy harbor, and we realize he is on his way to confront a destiny he has long avoided. 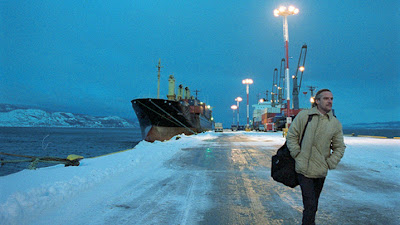 Alonzo uses the element of time as a paintbrush, electing to show certain aspects of Farrel’s journey in bulky detail – the labored packing of his rucksack seems like a separate short subject – while other moments are presented in intriguing, incomplete shorthand. The story advances in fits and starts, the only constant Farrel’s frequent swigs from his omnipresent bottle of Stolichnaya. When Farrel arrives at his rustic destination, nearly frozen and clinging to the back of a creaky logging truck, this prodigal son is greeted by wide yawns of indifference. Some of the film’s most effective scenes follow, as Farrel wanders into the town’s only diner; a dark, grease-stained affair that seems more like a waiting room for those seeking entry into purgatory. 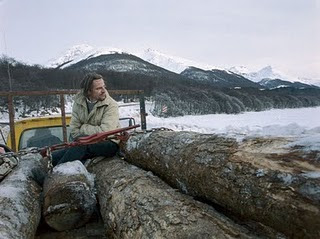 As Farrel eventually regains admittance to the world of his lost youth, we discover a previously unknown motivation for his difficult and painful journey. But Farrel is a wanderer, as evidenced by choice of lifestyle, and he must return to his vessel, now reloaded with shipping containers and ready for its next voyage. A lengthy denouement follows, which is a bit disconcerting at first, as the film’s nominal main character has long since departed the stage. But this methodology is a bit of subtle brilliance by Alonzo. It allows a true and deep understanding of the forces that pushed Farrel away, and how his deeply flawed character was unable to resist those forces. 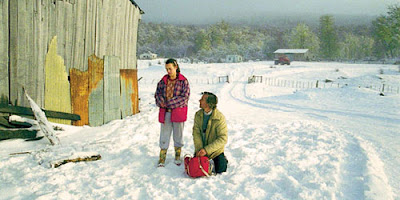 In the closing scene, the film’s incongruous title is given partial context, and Alonzo hints that at the heart of his story lurks an unthinkable version of original sin. But, as in the biblical account, the world continues its predestined spin despite the enormous consequences of the characters’ misdeeds. And we can only conclude that Farrel’s self-imposed exile deep in the bowels of a cargo ship is not just a job, it’s an atonement.

Very nice review, Bunched Undies. Thanks for the link. I like the alignment of the diner (or whatever that was) with purgatory--more and more fitting the deeper we get into the story. You've certainly made me want to see the film again. I couldn't tell whether you'd seen Alonso's earlier work or not, but if you haven't I would highly, highly recommend Los Muertos.

Looking forward to checking out more of your blog. Thanks for the generous and encouraging comments left on mine.

Thank you JB for taking the time to sort through it. Los Muertos is on my list...high on my list...hopefully its time will come soon.

Looking forward to reading more of your brilliant work as well.