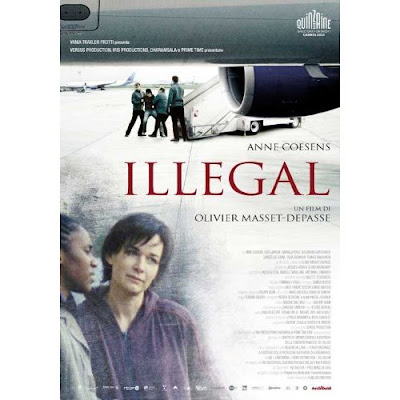 Illégal attempts to do for Belgian immigration authorities what Alan Parker’s classic Midnight Express did for Turkish prisons, and the films share a number of thematic and narrative similarities. Both have a basis in fact: Express was a harrowing first hand account of a justice system inclined toward brutality, while Illégal uses a scandalous true event to rationalize its searing, if unlikely, climactic fictions. And both films create dark fascinations that thoroughly engross. Like bearing witness to a tragic accident, the instinctive reaction is to look away. But Illégal taps such a deep vein of human empathy only the heartless will be insulated from its high emotional voltage.

Illégal examines the case of Tania (Anne Coesens), a Russian immigrant residing in the bustling Belgian city of Liège. Tania has overstayed her visa by 8 years, and during that time has become the foreman of a custodial crew at a large office building, while attentively raising her son Ivan (Alexandre Gontcherov), a 13 year-old who no longer remembers their former life in Russia. Director Olivier Masset-Depass, helming his sophomore feature, uses a brisk version of cinema verite to quickly establish Tania and Ivan’s backstory and their banal, work-a-day world of the present. These opening scenes have the look and feel of Dardenne Brothers products of the early 2000s, as Masset-Depass’s handheld cameras capture the cold, biting grime of industrious Liège with clanging immediacy.

While on their way to a surprise party she has arranged for Ivan, Tania and her son are stopped by immigration agents for a routine check. The hysterical Tania is subdued and cuffed by the agents but Ivan manages to escape, and their quiet, simple life is forever altered. Tania is hauled to an immigration detention center - a sort of bleak college dormitory encircled with razor wire - where she labors at hiding her identity while worrying herself into a frenzy over Ivan’s wellbeing.

Once inside the center, Masset-Depass adjusts his technique to accent the stoppage of time and Tania’s powerlessness. The camera becomes more stable and scenes are filmed with conventional coverage. This change in editorial tempo forces the audience to contemplate the full measure of Tania’s predicament. Despite heavy pressure by immigration officers, remaining anonymous is her only hope of avoiding a date with deportation.

The routine of life in detention gives the actors room to shine, as the characters find their own ways to adapt to a strange system that attempts to balance the martial with the humane. An African immigrant named Aïssa (Essa Lawson), a long term, iron-willed detainee with a rebellious streak, becomes a source of badly needed inspiration to Tania, and their unlikely friendship sparks surprising moments of warmth and humor. Lawson and Coesens build an intriguing chemistry, and their scenes add a balancing dimension of hope to the story’s increasingly bleak progression.

But it’s Coesens who shoulders the dramatic load here and over the course of the film we get deeply inside her frightened soul, yet she retains a mysterious, secretive reserve. Along the way there are panicked phones calls, escape attempts, meetings with hapless lawyers and, eventually, the ultimate act of rebellion. Coesens crafts Tania with such stark believability each scene is rendered as a fully formed entity, with just enough air of desperation to ensure the film never loses its precarious contours.

Like Midnight Express, Illégal ends with more of a whimper than a bang, but it’s a welcome change of pace. Despite some dangling threads, the film’s coda shifts the focus away from the quicksand of legality and onto the firmer ground of true justice. There are millions of undocumented Tanias in the world, all of them facing deadly risks and exhausting struggles in their quest to build new lives in new, often unwelcoming places. Illégal offers few answers as to how they do it, but gives compelling and poignant insights as to why.

Shot on 16mm with a 1.85 crop, the disc looks quite rich, full and surprisingly sharp, with the slight grain inherent in the format only enhancing the film’s dour patina. Masset-Depass limited the palette to mainly blues and grays and, as a result, the skin tones are fittingly cool and haggard. Dust specks, the bane of 16mm production, have been virtually eliminated and it’s obvious great care was taken with the telecine.

A stereo and a 5.1 track are offered. Illégal is not an aurally complex film, and our toggling between the two revealed little difference. In both cases, the mix is clear and clean, with a forbidding silence often the dominant element.

As customary with Film Movement releases, a short film is included. 2009’s Rita is a cleverly surreal immersion into the cloistered fantasies of a 10 year old blind girl (Marta Palermo). A sudden intrusion of grim reality challenges Rita’s perceptions, and her trusting spirit will be severely tested. Clocking in at 18 minutes, directors Fabio Grassadonia and Antonia Piazza have created a haunting parable that engages from start to finish, and is one of the true gems in Film Movement’s collection of shorts. Several previews of upcoming Film Movement releases complete the disc.

Unless one has faced Tania’s precise circumstances, it’s difficult to issue a judgment on the film’s accuracy. Characters and situations are introduced in the final reel that seem a bit cartoony and convenient, but they allow the narrative to plow forward without lose of momentum. Taken on its own merit, this is a skillfully directed and well acted film that will appeal to fans of edgy Euro-docudramas. Those who eagerly await the next emission from the Dardennes will find the raw, somber textures of Illégal a worthy substitute.
at March 26, 2011

This does sound very powerful. And I know first hand that Liege can be a grim grey place...
Great review.

Thank you Deborah. I have never visited Liege, and recent cinema hasn't placed it high on my list. The Dardennes have set all of their bleak films there, and I would imagine the Liege Tourist Board feels a bit picked on :)

what's with the ioncinema link? you got a job as well? =)

No, not a job. I just review the discs they are kind enough to send me :)