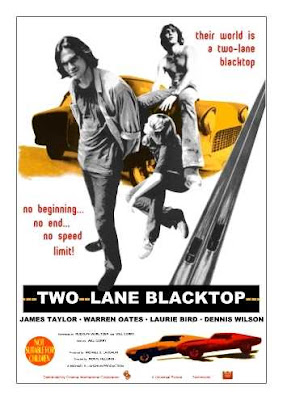 Free love, juiced up muscle cars and a dash of nihilism lend spice to this youth-ploitation oddity from the early 70s. If you took Easy Rider and removed the politics, and American Grafitti and removed the humor and charm, then combined the two the results would look something like this.

Dennis Wilson and James Taylor (yes, THAT James Taylor) both exude a charming awkwardness as a pair of drag race hustling drifters, while Monte Hellman's understated, detached style works well for this material. The great Warren Oates, the lynchpin of this movie, displays great charity by not overshadowing Wilson and Taylor in their scenes together. Oates saves his flourishes for the scenes in his car with assorted hitchhikers, whom he batters with outlandish tall tales.

Few actors have ever been able to glide from glad-hand slickness to criminal pathology as easily as Oates, and sadly he left this world much too soon. Speaking of hitchhikers, check out a young and studly Harry Dean Stanton as one of Oates' passengers. Makes you realize what an amazing career he has had as well. For a film theoretically about racing, Two Lane Blacktop is surprisingly unexciting, but it does have a pleasing cerebral and cultural vibe.