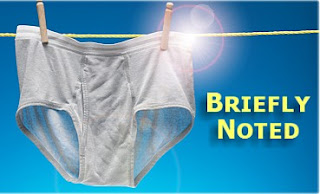 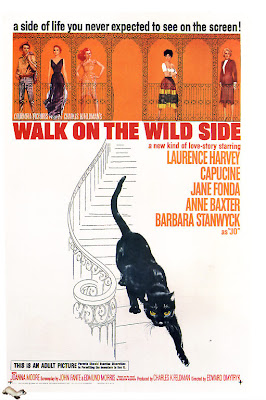 Delightful early 60s trash that starts with the oppressive bleakness of High Art, then about halfway through remembers  it’s an American film and says to hell with it. An unconvincing Laurence Harvey stars as a Texas dirt farmer – yes, you read that right – who comes to Nawlins’ to track down a fetching young miss (Capucine) who somehow escaped his affections and his dried up cornfields. Along the way, he meets a runaway slut-in-training (fabulous Jane Fonda) and captures the heart of Anne Baxter, who for some unknown reason plays a Hispanic café owner. Barbara Stanwyck, whose voice at this point had reached an Orson Wellesian deep timbre, plays a cathouse proprietress with a look that could kill….and does. Directed with a cunning brilliance by Edward Dmytryk - at least until the second act when he seems to lose interest. Perhaps he was distracted trying to figure out what a French fashion model was doing in Bumfuck, Texas. 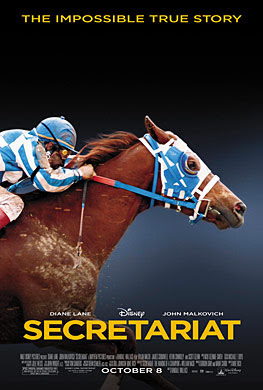 A good horse racing movie is hard to beat; almost as hard to beat as that amazing creature known as Secretariat. Diane Lane does some very good work here as spunky owner Mrs. Tweedy, who used her untrained instincts about horses – and people – to develop a racing legend. This Disney production is quite effective at capturing a feel of the early 70s, and director Randall Wallace tells the story without sentimentality or syrupy embellishments. Wallace, like jockey Ronnie Turcotte at the Belmont, releases the reins and lets this wonderful story run. 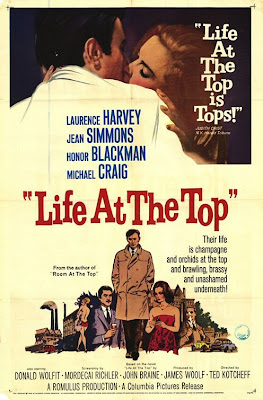 Larry Harvey again – I’m getting a bit OCD in my dotage – this time as a sales executive at a grimy widget factory somewhere in the freezing north of England. Married to the boss’s daughter (Jean Simmons) and heir apparent to Widget World, Harvey decides to risk it all in pursuit of a hotcha London news reporter (Honor Blackman) and frankly, who could blame him. But Harvey will learn that his success with widgets had a bit more to do with diddy-in-law's influence than any innate business acumen. Apparently a sequel to 1959’s Room at the Top, it’s not necessary to have seen the former to understand the latter. Filled with murky gray fog, rusting buildings, moral decay and tinkling cocktail glasses, Life at the Top is a sort of John Updike novel gone limey. So pour yourself a Rob Roy and relax with other people’s problems.
at July 11, 2011

Walk on the Wildside sounds interesting, but horribly miscast.

Yep, it's so miscast its feels like some sort of experiment...Anne Baxter as Hispanic? Ay carumba....

OT: I've been somewhat interested in trying out a Bollywood film. Any recommendations what to start with?

Sorry RH, I don't know a thing about Bollywood. This dude is really into it

He's a nice guy. I'm sure he can give you some good recs.

Did you read Reach for the top about Laurence Harvey's turbulent life? Fascinating.

That sounds interesting Bob. Harvey is rapidly becoming one of my favorite leading men of this period.