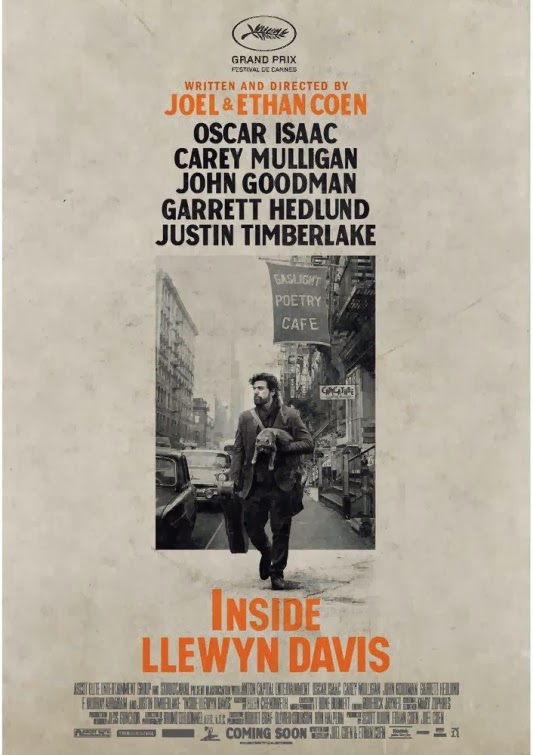 Inside Llewyn Davis is a gray and brown landscape of socked-in skies, lost bearings and muttered remembrances. Covering approximately one week in the life of a laconic, penniless folksinger (Oscar Isaac), the Coen brothers’ latest anti-adventure uses small, banal details to carve a much larger relief: the dawning of 1960s American counter-culture. As Davis performs in the musty coffeehouses of Greenwich Village, his quiet audiences are distracted by a growing spirit of dissatisfaction and dismay. The polite strictures of Eisenhower's America offer no answers to this generation of war babies, so they've  taken solace in heartfelt songs from the Great Depression, performed by rambling troubadours one step ahead of the vagrancy tank. 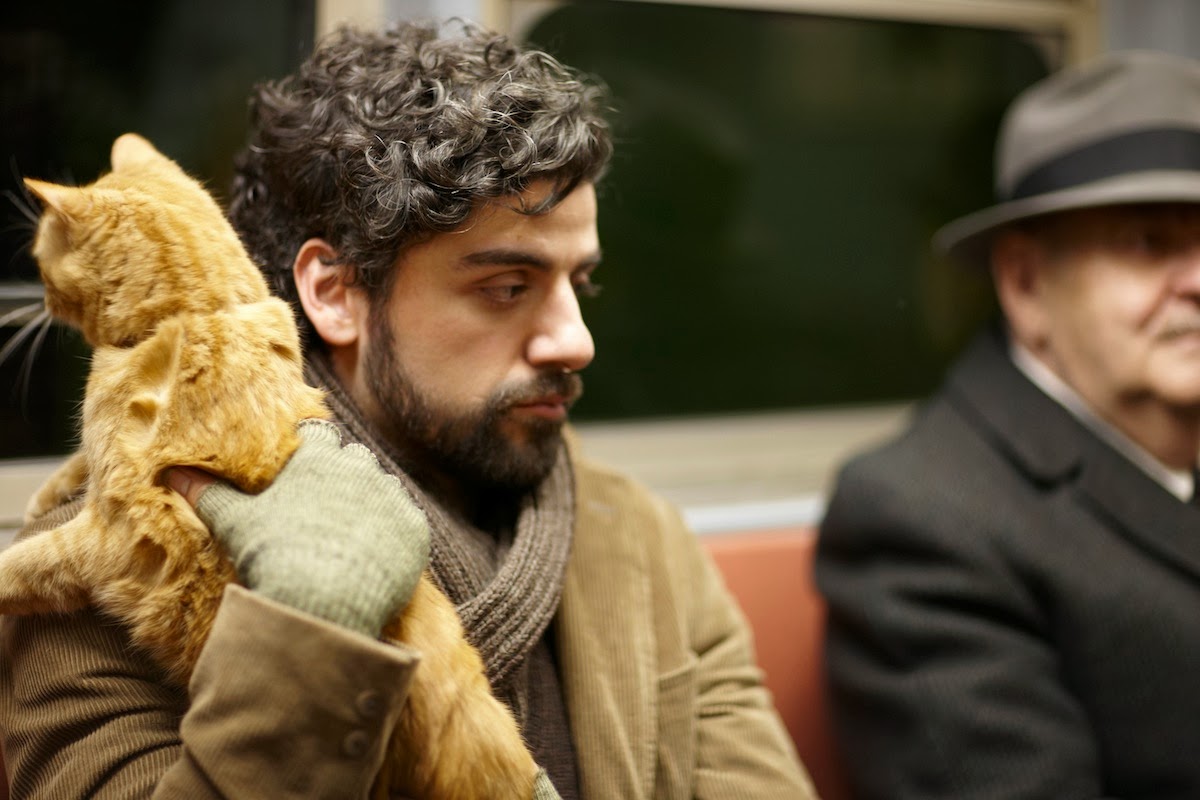 Llewyn Davis is one of these perpetually rolling stones; a talented musician but so lacking in charisma and connections he must scrounge for meals and crash pads, battered Martin and a variety of lost cats in hand. He was once part of a somewhat popular folk duo on the verge of, if not stardom, at least solvency. But Davis’ partner has thrown himself from the George Washington Bridge - once viewers get to know Davis they will likely understand why - leaving this angry, grim faced guitar picker to fend for himself. New York was a cold world for folksingers in 1961, and Davis must deal with sleazy managers more accustomed to handling lounge acts, apathetic listeners and a gnawing sense he should chuck it all and return to the Merchant Marines. 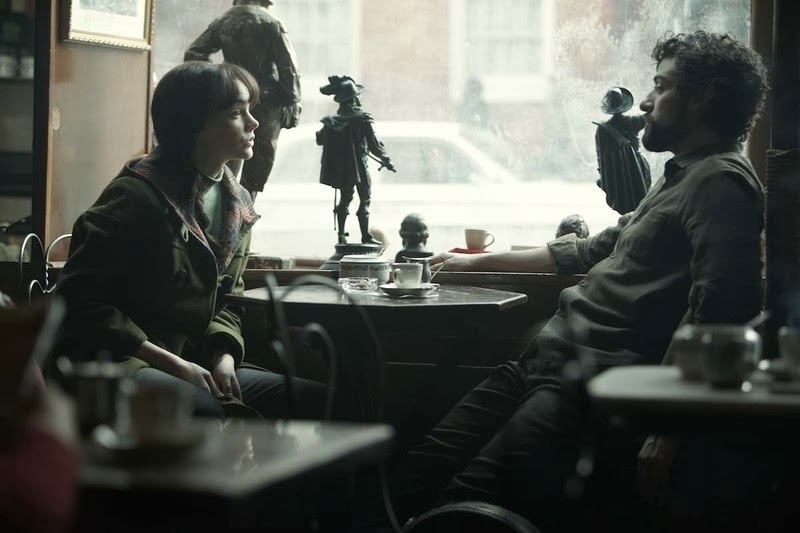 Unlike the grand comic book of the Coen’s last musical foray, Oh Brother, Where at Thou?, the brief humorous glimmers found here have a sour edge, and are usually the result of Davis’ screw-ups and penchant for self destruction. In the early going, he is subject to endless berating and abuse from his “friends” - most notably Carey Mulligan as a folksinging colleague - which seems unfair and disorienting until it’s slowly revealed that Davis deserves every bit of it. As Davis scrounges for shelter and gigs, the Coens introduce a swirl of supporting characters, all of whom bring a sharper focus to the singer’s complex dilemmas. A young, personable soldier (Stark Sands) who moonlights as a folksinger and an aging dissolute jazzman (John Goodman) represent the dire evolutionary chart of a typical musician’s life. 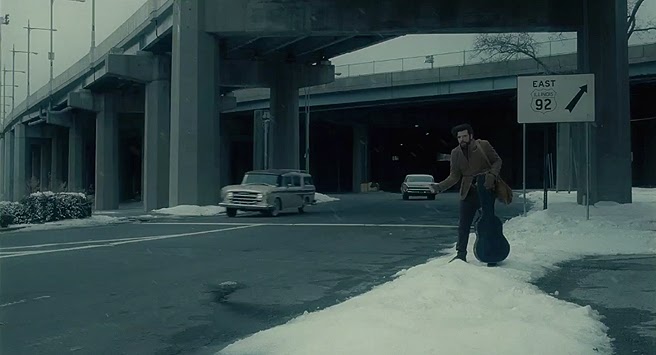 The Coens have structured their script in a circular fashion, much like a folksong, with verses, chorusses and Davis’ ill-advised trip to icy Chicago serving as an improvisational solo bridge. Along the way viewers are treated to haunting scenarios and equally haunting songs, including the recording a comedic novelty record that will most certainly bring Davis even more grief in the future. When Isaac sits down with a guitar under the spotlight, Inside Llewyn Davis’ cacophony of angst recedes and the angels take over. The performances here transfix, at least in part due to our amazement that a schmendrick like Llewyn Davis could create such wonders. 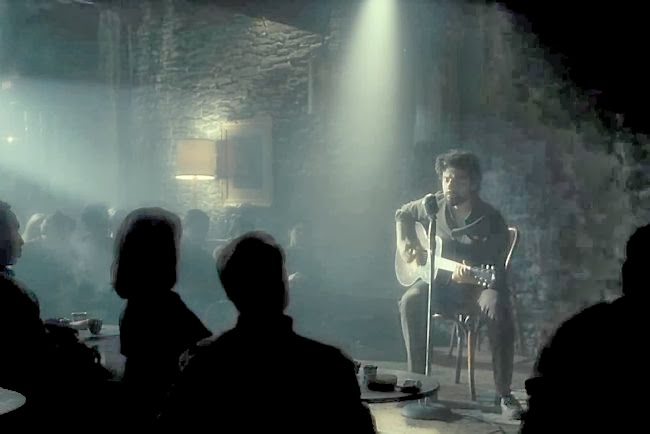 That amazement extends to the Coen Brothers, who have painted their masterpiece with such perspicacious gentleness. Inside Llewyn Davis is a film that demands multiple viewings; its placid complexities only partially exhumed in one sitting. While Davis may be a master of melody, his sense of timing stinks to high heaven. It appears he’s going to throw in the towel just as another example of Minnesota-bred genius, a screechy voiced mop-top who will carry folk music to unprecedented popularity, takes to the stage. Thus ends our sojourn Inside Llewyn Davis but thanks to the Coens, we can’t wait to go back.

Yeeha!! Glad to hear that you love it!

I can't wait to see this!

Is it just me, or do cats in movies make anyone else nervous? I mean, in Breakfast at Tiffany's I don't even care if they get together in the end, I'm just worried about the cat being found! Cats are not like dogs - they generally don't come when called - and any time I see a person holding a cat in a public place I have daymares about the cat getting away and getting lost... totally distracts me from the storyline of the movie.

One of the best films of the year.

Really REALLY excellent review, Bunchy. I just saw it last night and, once again, the Coens surprised me. I was a huuuuuuuuuge folkie from 1962-1966, when paychedelica nudged it out of the center of my life ... but 1961 was importantly before my awareness of "the scene" (but not before becoming part of the sullen dissatisfaction, even as a 13-year-old, of Boomer Babies.) So, folkie that I was, I was expecting the movie to cover more familiar territory. And I certainly was *not* expecting the odd ending of the repeated beating by the zither-lady's husband that opened the story. I can accept your musical metaphor of repeating choruses, but I still suspect the Coens were also riffing a bit on the deepest aspects dealt with in "A Serious Man" -- those of the chaos and unpredictability and illogical, uncontrollable, and unknowable nature of The Universe(s). I know I need to watch "Inside Llewyn Davis" again to see if I can somehow get that last scene to settle in
more gracefully.