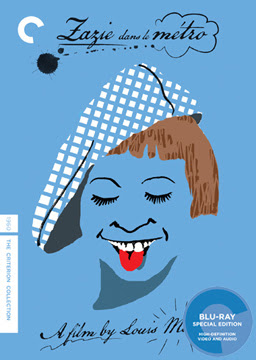 Louis Malle’s Zazie dans le metro is a dizzying, delightful – and absolutely insane – surreal comedy heroically rescued from obscurity by a shining new Criterion release. Based on a best selling novel by Raymond Queneau, Zazie offers such a staggering onslaught of candy colored images and clever wordplay it’s as if the film emanates not from a projector, but a kaleidoscope. By the time all is said and done, and its mesmerizing web finally begins to dissolve, viewers will likely want to start the disc over again just to prove that what they saw the first time was real, and not the result of some fevered delirium.

First and foremost, Zazie dans le metro is an examination of the foibles of the adult world as seen through the eyes of an exceptionally bright child – at least that is one of many applicable interpretations – and can be considered a slapstick laced Catcher in the Rye for the tweener set. In the early scenes, Malle creates a tableau that has the look and feel of an illustrated children’s story come to life. Obviously inspired by the work of Ludwig Bemelman, creator of the Madeline series, the Paris depicted here is a funky, bohemian wonderland of crumbling art nouveau cheese shops and fat feral cats. The citizenry sport the regal haberdashery of a bygone era, but it’s a style consciousness gone to seed; their waistcoats becoming more threadbare as their aging bodies sag ever closer to the sidewalk. But despite its trappings, the story is no Eloise at the Plaza sunny, genteel adventure; for along the way this screwy comedy will deal with incest, child abuse, cross dressing and all flavors and manifestations of human sexuality.

12 year old Zazie (Catherine Demongeot) has come to Paris for the weekend with her free spirited, widowed mother (Odette Piquet). She is dropped off with her uncle Gabriel (Philippe Noiret) for safekeeping, while Mom visits with the most recent of her string of ne’er-do-well boyfriends. Young Zazie is a child prodigy in at least two skill sets: seeing through adult deceptions and the blatant use of foul language, and she plies both of these talents with the effortless flair of a true master. She’s also adept at creating mayhem, and when her desire to ride the Paris subway is thwarted by a sudden labor stoppage, Zazie decides to take out her frustrations on an unsuspecting populace. And when the dust settles from the resulting madcap maelstrom, the City of Lights will never be the same.

It’s always tempting to try to place a 50 year old film into some sort of cinematic perspective, but Malle synthesizes such a vast gamut of outlandish styles in Zazie dans le metro it would require years of devoted study to precisely determine his derivations from his innovations. There are strong allusions to the work of Jacques Tati – with examples almost too numerous to count - including one rooftop shot that’s a verbatim homage to Mr. Hulot’s Holiday. But one could make a case that the admiration channeled in each direction, as Malle’s destruction of a restaurant here is mirrored in the climactic scene of Tati’s Play Time from 1967. Malle also clearly draws on the mechanical aesthetics of silent comedies, as many scenes feature a slight undercranking – both as an optical effect and at the camera – which bestows the characters with the amusing, herky-jerky motions of the Keystone Kops.

The film’s middle section features a delightful extended chase scene, complete with virtually every visual gag in the Chuck Jones playbook, as Zazie plays Roadrunner to Vitorio Capreolli’s hapless coyote. But, true to the film’s daring and decadent ethos, the script clearly hints that this version of Wile E. Coyote may in truth be a child molester. Capriolli plays a variety of roles over the course of the film or, more precisely, adopts the role of shape shifting predator of children, attractive young women and, ultimately, of nations, as a thinly disguised Mussolini. And, while the two films could not be more different in execution, Zazie’s depictions of childhood share a spiritual similarity to The 400 Blows, made only a year earlier. It’s unfathomable to this reviewer why Truffaut’s classic became part of the film school canon while Malle’s equally excellent product remained largely unknown.

Philippe Noiret gets his turn in the spotlight in a harrowing sequence filmed at the top of the Eiffel Tower and, while it’s all played for goofy laughs, it features the type of perilous stunts that would only be attempted through CGI today. Noiret, his character having lost his glasses, precariously hangs from girders and waltzes along the edges of open beams in a lengthy montage that will send acrophobics screaming from the room in a cold sweat. Noiret is young here, and still too babyfaced for the gruff teddy bear persona he would eventually develop. But through his verbal sparring with Zazie we the see the genesis of his unique chemistry with child actors; a chemistry that would make Tornatore’s Cinema Paradisio an enormous international hit 20 years later.

As the film begins to scale up toward its monumental conclusion – and monumental is the only word for it – Malle’s vision of Paris devolves into a nihilist, gridlocked netherworld of juggling polar bears, fascist restaurants, dream sequences, food fights, dancing girls, destroyed automobiles and enough broken champagne bottles to launch a thousand ships. Just when you thought the film had reached a critical mass of absurdity, there’s always a new, even broader exercise in cinematic Dadaism emerging from the rubble. Eventually both the film and the subway strike resolve and the imaginative world of Zazie returns to normal, but most viewers will find that reentry difficult and even slightly depressing. For Louis Malle created a beguiling world devoid of logic or limits, with a comedic buffet so deliciously rich and chewy one visit hardly seems sufficient.

DISC REVIEW
The film is thankfully presented in its original aspect ratio of 1.33:1 and, as one of the few French films of this era shot in color, offers a bold and refreshing look. Like kids in a candy store, Malle and his crew use every opportunity to inject even more chroma into the proceedings with extensive use of colored key lights motivated by neon signs in the background. Warm reds and golds are the predominate tonalities in the day exteriors, and the transfer delivers these colors with a nicely controlled sharpness. At first blush, the green channel appears under-dialed on some scenes, but it’s important to keep in mind the abundance of grays in the architecture of Paris, and keeping unwanted hues out of these shots would be quite a challenge for any colorist. The matrices created here are finely balanced and work well in keeping Zazie’s outrageous visual shifts in harmonious unity.
The original mono track has been beautifully restored as well, with a few dubbing “dead spots” that only add to the film’s eccentric charm. The mix keeps the actors front and center at all times; appropriate since Zazie, despite its hyperactive visuals, is still very much a dialogue driven picture. There must have been quite an urge to create a juiced 5.1 track to compete with all the ocular zaniness, but fortunately good taste prevailed.


This new release gives us a bit more perspective on the career of Louis Malle, and a deeper appreciation of his wide range of filmmaking talent. While often lumped in with auteurs of the nouvelle vague, the Malle filmography includes everything from heartbreaking tales of wartime (Au revoir les enfants) to hypnotic minimal films (My Dinner with Andre) to conventional Hollywood style romantic thrillers (Damage). Zazie completes the mosaic, and further defines Malle as a throwback to the great journeyman directors – talents like John Ford and Michael Curtiz - whose chief concern was to make a wonderful film regardless of the genre, as opposed to creating a personal brand. Despite its occasional dark allusions, Zazie is a joyous exercise in festive, flamboyant excess. After a deliberate and measured beginning, the film seems to become possessed, and is soon propelled to an irresistible momentum. By virtue of its sheer aggressive lunacy, Zazie dans le metro makes It’s a Mad Mad Mad Mad World look like a work by Tarkovsky.