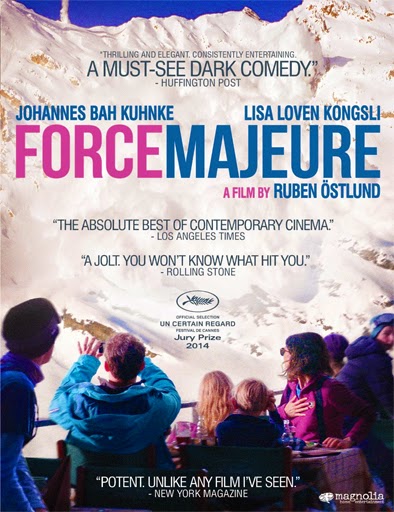 In the words of Lyle Lovett: “One bad move can turn your world upside down.” The protagonists of Force Majeure (2014) offer living proof of that axiom. While on a ski vacation in the French Alps, a young Swedish family finds themselves questioning every aspect of their existence after the usually responsible dad Tomas (Johannes Kuhnke) reacts to a potentially deadly situation in a shockingly selfish way. The story unfolds slowly over the course of a week, with plenty of guilt, recriminations and failed attempts at redemption along the way. While this may sound like a Bergman premise, the soul searching in Force Majeure is played mainly for laughs, albeit dark and subtle ones.

While the couple debate core human principles, some of Force Majeure’s most effective scenes involve a supporting cast that illustrates the difference between first and second hand information. When recounted matter-of-factly, Tomas’s breach of trust sounds distinctly worse with each retelling. When the couple is visited by Tomas’s older, desperately hipster brother (Kristofer Hivju) and his 20 year old girlfriend (Fanni Metelius) the discussion of the event stubbornly defies every attempt to downplay it. But the new marital tension also opens new opportunities, as mom Ebba (Lisa Loven Kongsli) becomes fascinated with a worldly woman (Karin Myrenberg) espousing the virtues of open relationships, while Tomas and his brother find themselves hilariously flustered and flattered by two flirting ski bunnies.

Writer/director Ruben Östlund gained international attention in 2008 for his eccentric comedy Involutary (review here) which showed a variety of Swedes engaging in wacky behaviors as they try to crowd a year’s worth of fun into a few short summer weeks. The same type of sensibility is on display here, but the limited palette of one family’s story seems to cramp Östlund’s style a bit. Force Majeure is brilliantly photographed and has a number of wonderful moments, but they’re separated by lengthy sections that fall slightly flat. Still highly worth seeing, especially if you appreciate the off beat, skewed humor of directors like Roy Andersson and Aki Kaurismaki. 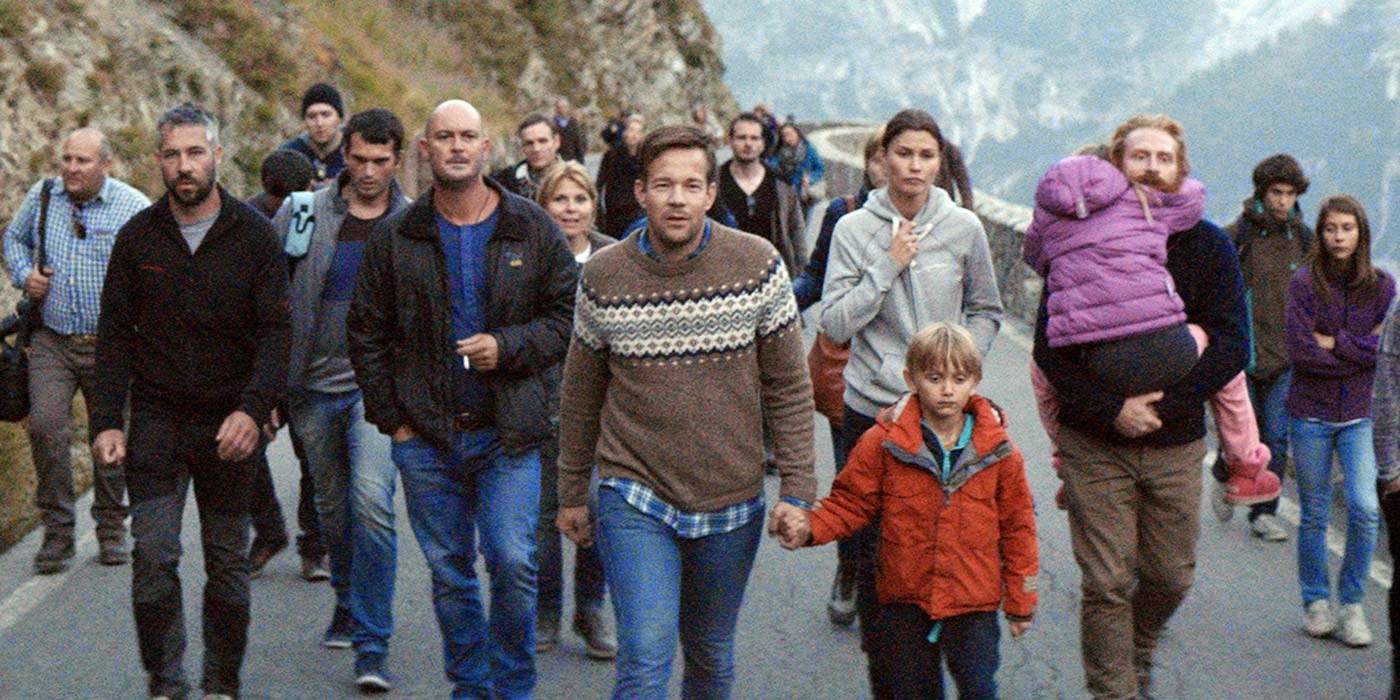 Force Majeure has received a host of award nominations and it won the coveted Un Certain Regard Jury Prize at Cannes in 2014. It offers a groaning board of food for thought, and represents a significant upgrade for Östlund both in budget and recognition. And it ultimately presents a small but powerful catharsis, as Tomas marshals his strength to face a later crisis in a heroic manner, and indulges in a cigarette to celebrate his valor. It is a well deserved return to righteous humanity, and his arc completes the Lovett analogy: Tomas had “been so good up till now.”

Thanks, great review. From Sweden come great TV series and films at the moment.