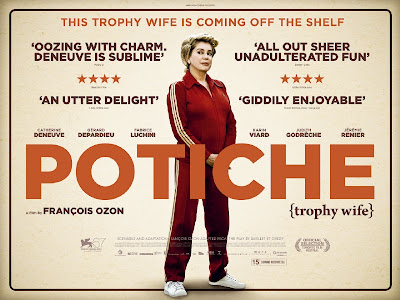 The last time director François Ozon attempted a goofball comedy, the star studded 8 Women from 2002, results were mixed, with a few hilarious segments interspersed with labored jokes and high camp production numbers that fell flat as a crêpe. The film did achieve a sharp polarization of audiences – folks either loved it or hated it –but fully appreciating the film was dependent on familiarity with the screen personae of the leading ladies in Ozon’s assemblage. 8 Women is a film that’s gotten better with age, and only improves with repeated viewings; its subtle under currents and rich in-jokes more apparent after the initial shock. And no matter how many times you’ve seen it, the brief catfight between Huppert and Deneuve – that Isabelle seems to enjoy so rapturously – is an absolute scream. 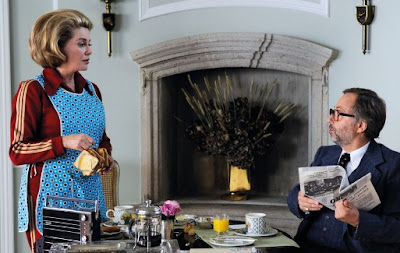 No such unevenness plagues Potiche, Ozon’s crowd pleaser from 2010, which quietly snuck into Phoenix last week, no doubt embarrassed by its tardiness, only to be buried beneath Woody Allen’s latest and a pile of fledgling X-Men. Potiche is a silly situational farce, full of convenient plot twists and warm, fuzzy coinkydinks. Set in the 1970s, the film is production designed to the hilt with lots of gold and avocado and massive mechanical telephones covered by hand knit cozies. But the film’s stylistics are not geared to a mere recreation of the period. Ozon’s ambitions run deeper; not just to parody the look and feel of 1977, but to both skewer and celebrate the era’s popular entertainment and changing social mores. 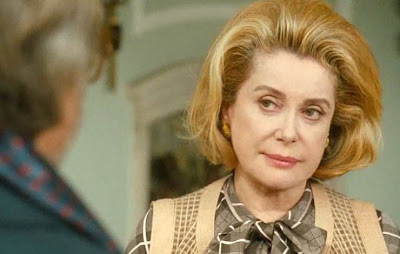 Catherine Deneuve, who at 67 has never looked better, stars as Suzanne Pujol, pampered trophy wife of Robert (always wonderful Fabrice Luchini), the wealthy CEO of an umbrella manufacturing company founded long ago by Suzanne’s father. When Robert stubbornly refuses to negotiate with the union, protests erupt at the factory, spurred on by local mayor and communist MP Marice Babin (Gerard Depardieu). Robert, who suffers from one of those convenient heart conditions, is felled during an apoplectic fit as the protests wear on, and is advised to go on an extended rest cure. Suzanne takes over the factory’s day-to-day operations and, despite her inexperience and cocooned perfect life, slowly begins to win over the workers with her compassionate sense of fair play. Those charms extend to strike leader Babin as well and, in a surprising turn, we discover these two political polar opposites share a secret history. 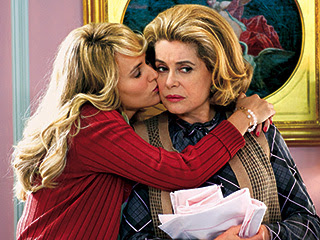 At this point the plot, which features more convolutions than an Escher staircase, pretty much runs on autopilot, sustained by its own daffy momentum. Freed from the demands of nuanced storytelling, Ozon parties down with some delightful 70s flavored set pieces. Deneuve and Depardieu visit a disco, supposedly for a business meeting, and before long they’re out on the illuminated floor in full boogie beneath a mirrored ball. This is the type of wacked dance number Ozon struggled with in 8 Women, but here he keeps it simple and the results are silky smooth. The fact that these moves seem second nature to Deneuve and Depardieu, two survivors of the disco era, certainly doesn’t hurt. 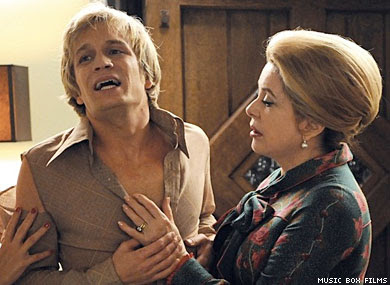 Jérémie Rénier and Judith Godrèche play Deneuve’s adult kids, and they each approach their roles with studious attention to detail. Godrèche, who looks great in wide 70s stripes and Farah Fawcett hair, perfectly presages the building conservative cultural backlash that would erupt in the 1980s, while Rénier, adorned in bodyshirts and brightly colored ascots, discovers a new freedom of lifestyle when he becomes top designer at the factory. When Luchini returns from sick leave, he’s less than happy with the changes Deneuve has implemented, and launches a corporate subterfuge to overturn them. But with the help of Luchini’s secretary and long time mistress (Karin Viard), Deneuve exploits her charismatic management style in pursuit of a much bigger goal; a goal that will make the umbrella factory seem like small potatoes and leave Luchini and Depardieu gasping in her wake. 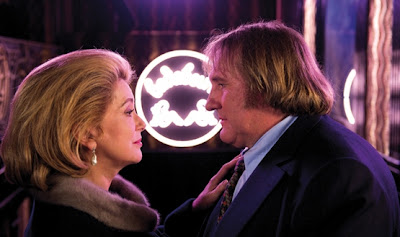 In the last year or so, Gerard Depardieu’s public image has taken a serious beating. His continuing feud with Juliette Binoche has only gotten nastier, while he’s become the ever increasing butt of jokes about his weight, which has reached alarming proportions. But as his recent performances attest, he’s still a charismatic and highly skilled actor, with the added bulk only enhancing his commanding presence. He can also be extremely generous. Given a juicy opportunity here to play villain and romantic lead rolled into one, Depardieu never tries to take the spotlight from Deneuve; his approach to the role obviously laced with deep respect and admiration. Depardieu’s years of experience have taught him the vital lesson of how to dominate without being dominating. He’s all too happy to support his old friend Cathy and retreat gracefully into the background when it’s her turn to shine. Their intimate chemistry is reminiscent of two old soldiers who meet for a drink 40 years later in a plush hotel’s twinkly piano bar. As they quietly reminisce, the busy modern world rushes by, unsuspecting of their past heroics. 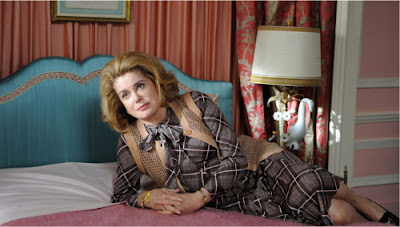 But Potiche’s brightest diadem is claimed by Deneuve, due to a performance that’s dialed in exactly right. Her early scenes of suburban bliss strike the perfect tones of high perch obliviousness tempered with the best aspects of limousine liberalism. When her surprising past is revealed, she sells the notion through ribald, unapologetic glances but maintains her proper garden club decorum. After portraying Suzanne as a cloistered, head in the clouds housewife devoted to nature jogs and quickly scribbled poetry, the film shifts to tap her deep pools of strength and wisdom, and makes a convincing case that the experience of raising children and dealing with male egos offers a sounder education than any business school degree. Indeed, such were the roots of the middle class feminism that swept the professional world in the 1970s; the only thing missing in Ozon’s simulation is Helen Reddy’s I Am Woman playing in the background. Deveuve is a joy to watch through it all, and with Ozon’s inspired staging and Philippe Rombi’s delightfully melodramatic score, they manage to keep Potiche happily spinning in a goofy comedic groove.