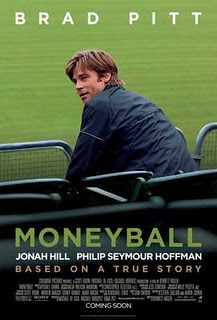 Moneyball is a tightly woven sports drama that focuses more on the art and science of team building than the heroics of individual athletes. Based on a true story, the movie concerns a year in the life of Billy Beane (Brad Pitt), general manager of the Oakland Athletics, who in 2002 utilized unconventional methods of player evaluation to construct a winning team despite one of the lowest payrolls in major league baseball. Thanks to brisk writing by Steven Zaillian and Aaron Sorkin, and no frills direction from Bennett Miller, Moneyball navigates a complex narrative with nary a false step. And while the story presents a sprawling cast and assorted fateful twists, the filmmakers have picked their battles so carefully and correctly that Moneyball never loses its clarity or good natured momentum. 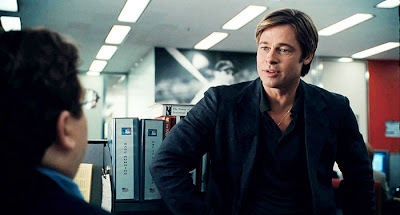 At a meeting in Cleveland, Beane encounters a nebbishy fellow named Peter Brand (Jonah Hill), a Yale economics graduate who spends his days evaluating players based purely on statistical models. Brand has little use for traditional scouting reports, which are often subjective and based on inaccurate assumptions. Beane, a former bonus baby who washed out in the big leagues, knows first hand how much damage poor scouting can do, both to teams and individual players. The men strike up an unlikely partnership, as Beane realizes the only way Oakland can compete with the big market teams is to build a roster with low cost unknowns and discards, much to the dismay of his scouting staff and crusty manager Art Howe (Phillip Seymour Hoffman). The A’s begin the 2002 season with a motley line up culled from Brand’s analysis, and the rest of the baseball world can only shake their collective heads and wonder just what the hell is going on out there in Oakland. 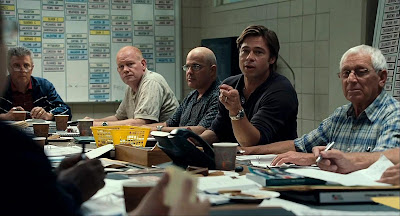 Pitt is terrific as Billy Beane, a role ideally suited to his physicality. As he roams Oakland’s shabby offices in stained workout gear, he strikes the perfect balance of muscular intensity and roguish charm. When his ramshackle A’s go into a death spiral early in the season, Beane must rethink his calibrations and, baseball bat in hand, he goes about a dramatic form of housecleaning. Pitt is given several of these mad scenes during the course of the film, and he clearly conveys a dual purpose; to shake up his complacent ball players and express his own disappointment over his life choices. Beane’s relationship with his ex-wife (Robin Wright) and his tweener daughter (Kerris Dorsey) is explored at length - no doubt in order to establish Beane’s motivation for a critical decision he will make later in the film – but Zaillian and Sorkin create dialogue that makes these scenes effortlessly glide, cleverly avoiding any sense of narrative distraction. 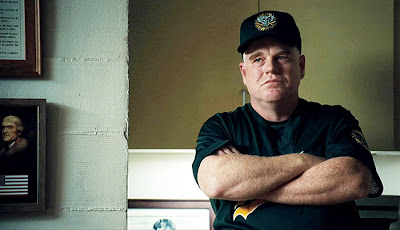 In Act 3, Moneyball briefly takes on the contours of a more traditional sports movie, as the determined A’s go on a long winning streak that threatens to rewrite the record books. While the rendering of these scenes owes much to Barry Levinson’s The Natural, director Miller successfully folds in a personal catharsis for Beane amid the tense heroics. Hoffman, while on paper is not given much to do, proves once again his gravitas by dominating his few scenes with the minimalism of the deep thinker; the Bergman-esque loneliness of the pudgy, middle-aged manager who can only hope and pray that his charges execute on the diamond. 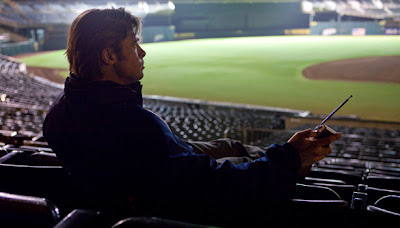 The film can rightfully be accused of fudging for dramatic effect. Not all of Oakland’s success that season can be attributed to Beane’s rehabilitated cast-offs, as the roster also featured future all stars like Miguel Tejada and Barry Zito. But much like Sorkin did with the TV series The West Wing, here he takes the seed of reality and germinates it into a compelling and absorbing entertainment. And while Beane and Brand’s baseballers, despite their personal issues, are ultimately judged by what they do between the lines, Moneyball must be judged by what ends up on the screen. The results will please fans of baseball, Brad Pitt and graceful, highly skilled storytelling. And that should cover just about everybody.
at October 02, 2011

I've heard a lot of good about this movie. I don't care a lick about baseball, but I might have to check it out.

I'm sure you'll enjoy it RH