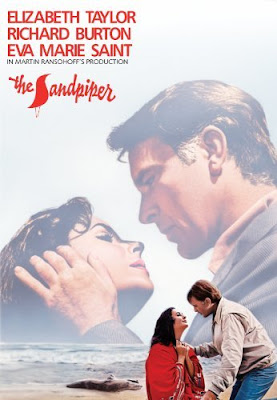 As part of Hollywood’s embrace of adult themed romantic dramas in the 1960s, The Sandpiper was promoted with a breathless marketing campaign that promised no shortage of steamy debauchery. Elizabeth Taylor and Richard Burton, fresh from their headline grabbing antics on the set of Cleopatra, were cast as a hapless couple in the grip of uncorralled illicit passions. Upping the ante was a hinted Christian/Atheist smackdown, with Burton’s Episcopal minister representing all that is good and moral versus Taylor’s liberated, free love watercolorist, set in the dreamy ocean mists of Big Sur. Like politicians, movies rarely deliver on all their promises, but The Sandpiper took welching to new heights, replacing the property’s inherent sexual and philosophical tensions with soapy bland porridge. The film is notable today mainly for its mournful Oscar winning song The Shadow of Your Smile by Johnny Mandel. It’s a great tune that’s gone on to become a jazz standard, although the movie nearly beats it into the Monterrey County surf from overuse.

Single mother Taylor lives a bohemian existence with her home schooled son (Morgan Mason) in an off-the-grid A Frame constructed literally on the beach. When he shoots a deer out of season, Taylor’s son is ordered to attend a Christian school run by Dr. Hewitt (Burton), a harried headmaster obliged to spend more time glad-handing rich donors than actually teaching. Job pressures have clearly taken their toll on Hewitt, as he glumly drives to fundraisers in the most unhip Ford station wagon ever photographed. But Taylor’s wild child is far advanced in his home-brewed studies and is allowed to skip a grade, arousing Burton’s professional curiosity. He soon visits Liz at her funky utopia beneath the cliffs, and certain other parts of Burton are eventually aroused as well.

Vincente Minnelli was a superb director of musicals, but his background and aesthetics are too Old Hollywood for what should have been a small story of personal crisis. Every effort is made to enlarge the canvas, including several supporting characters that serve mainly as distractions. Charles Bronson’s hunky sculptor is used as a sort of chief debater for the sinful free-spirits, but Burton’s impressive oratory makes short work of the argument. Eva Marie Saint, as Burton’s wife and school administrator, seems more like an old college pal than a soulmate, and is thoroughly wasted in this role. But most problematic is Taylor, who the script has no idea how to handle. For a character brimming with sympathy, the film offers plenty of opportunities to pass judgement. She ultimately comes off as a party girl with a string of rich boyfriends from Indiana to Carmel; her path strewn with broken, but well-heeled, hearts. 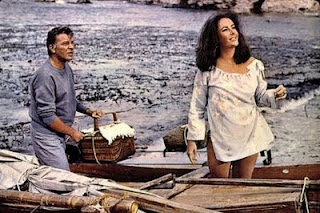 And there we have The Sandpiper’s downfall, as Minnelli and company refuse to commit to the story’s true cultural conflicts and instead settle for socially coded comforts. Standard American morals are tepidly challenged, but at great cost to the questioners, and apparently it’s OK to engage in unconventional lifestyles as long as your background includes a significant number of landed gentry. But this was 1965 - still a few years away from the zenith of filthy hippiedom - yet The Sandpiper does precious little to pave the way.
at May 22, 2012

One of the problems with films of this era is so much talent, but so few great films. Even many that are considered great from this time I don't really care for. Was it the editing? Was it the lack of a studio boss? Too many drugs? Lack of focus on filmmaking and more focus on stardom?

A bit of all of the above, but mainly I think it was a clash of styles. Producers were pushing for edgier, riskier, more personal subject matter ( to compete with TV) and then handing those scripts to directors and actors weened on the big money glamour days of Hollywood.
Conversely, the British cinema of this period generally captured the brooding, rebellious nature of the era more effectively. The best of the British "New Wave" remain interesting historical artifacts and are quite enjoyable, although few are available on home video (at least in the States)