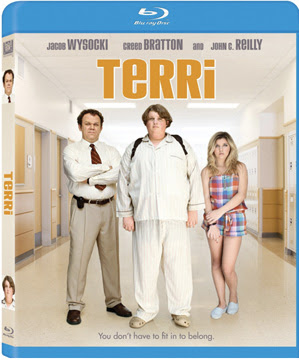 Terri is a low-key American indie all about the struggles of an obese high schooler (Jacob Wysocki) in the thoroughly funkifed outskirts of Pasadena. The film has the cloy, ironic ponderous that inflicts so many smaller productions these days - the smug superiority of the tightly budgeted – yet manages to retain a winning measure of intriguing charm. As Terri galumphs his way down locker-lined hallways clad in baggy pajamas, his school uni of choice, his glassy gaze seems like much more than a bemused outsider’s affectation. For just as Terri’s body is layered with flab, his gentle soul is layered with a burnished wisdom beyond his year.

Director Azazel Jacobs strikes a delicate balance between mumbly bleakness and adolescent goofiness, rendering a tonality akin to Carlos Reygadas meets John Hughes. Terri, abandoned by his parents, lives with his Uncle James (Creed Bratton), in a dark old house so cluttered with dusty hippie bric-a-brac the structure could serve as a museum of Baby Boom America. Not even sunlight can infiltrate its protective mustiness, as Terri and Uncle James quietly munch on their beloved dinners of beans on toast, safe from the world’s criticisms and judgments. Uncle James suffers from early onset dementia – if there was ever an actor meant to convey senility, it’s Creed Bratton – and Terri is often compelled to keep his uncle’s wandering mind grounded in reality. When Bratton orders Wysocki to set mouse traps in the attic, Terri takes the dead vermin into the woods to feed a nesting falcon – not the film’s only reference to Ken Loach’s Kes – but Uncle James has forgotten his earlier commands, and painfully berates Terri for animal cruelty.

But for a few hours each day, Terri must leave his floundering uncle and traipse down a weedy, overgrown path to the local high school; a rather chaotic institution Jacobs has populated with some superb casting choices. The lumbering Terri suffers his classmates’ cruelty much to the indifference of his home room teacher Mrs. Davidson (Tara Karsian); a woman so burnt out and over it she could serve as a poster child for haters of teacher’s unions. His amusingly aggressive gym teacher (Tim Heidecker) is predictably disgusted by the rotund Terri, and accuses the boy of having “contempt for wellness”.

Terri appears to have one champion in the school, the eccentric Vice-Principal Mr. Fitzgerald (John C. Reilly); a man who hides his disciplinarian instincts under a passive aggressive veneer of cool. Fitzgerald has obviously been charged with the school’s “problem kids” and finds Terri’s gentle nature a refreshing break from the tattooed hoodlums that regularly appear at his door. Reilly approaches the film as a personal canvas, and while his riffs are unfailingly entertaining, at times he pushes the film to the brink of comic abstraction. But Jacob has provided a powerful counterbalance, thanks to an amazing performance by Bridger Zadina as Chad, a self destructive, rich kid quasi-Goth. Over the course of the film, Zadina will steal scenes from both Reilly and Bratton; an achievement this reviewer previously thought impossible. Chad’s outrages expose the weaknesses in Reilly’s calm, hipster façade, and this skinny, energetic kid slowly develops an unlikely friendship with the metabolically challenged Terri, who is at least quadruple his size.

Fitzgerald, Terri and Chad leave school one day to attend a funeral, and viewers are treated to some superb ensemble acting in the process. During a lunch stop at a diner, the trio engages in a conversation that appears at first to be the most miniscule of small talk. But Reilly and Zadina, through non-sequiters and pregnant pauses, deliver a scene with the icily exquisite timing of a Miles Davis trumpet solo. The viewer’s empathy for Terri is deepened as well; compared to the raging internal insecurities of Chad and Fitzgerald, his caring and serene nature seems heroic.

Unfortunately, that heroism may lead to Terri’s undoing, as the film moves toward its main event: a quirkily modern retelling of Beauty and the Beast. When Heather (Olivia Crochiccia), one of the school’s chief hotties, gets in trouble with Fitzgerald for her sexual explorations, Terri gallantly rushes to her defense. But his motives are not as pure as advertised, for Terri has spent many wistful hours in Home Economics class staring at Heather’s legs and, as an added benefit, the situation affords him the opportunity to get even with one of his main tormentors. Soon, Terri finds Heather’s gratitude building to unmanageable proportions, and in a masterfully directed party scene, the Beast will learn if Beauty is truly worthy of his attentions. Crochiccia’s garbled line readings have an arresting ring of authenticity, and this climactic scene ranks as another superb set piece engineered by Jacobs.

Presented in 1:85:1, the blu-ray is sharp and clean and delivers the film’s sunny California cool with pristine conviction. DP Tobias Datum works visual magic with scant elements, and creates looks that are attractive, yet impeccably right for the tenor of each scene. His brave celebration of the ordinary is one of the key reasons Terri’s meager narrative is never overwhelmed by its inherent angst. Datum manages to find deep and meaningful textures within the simple motivations he is given. The crucial basement party scene, in theory lit by one 60 watt bulb, crackles with the murky depth of soul wrenching dilemma, while the film’s denouement sparkles with the sunny promise of a new day, as Terri and Fitzgerald share the joys of wounded male commiseration.


The 5.1 track is well balanced and allows the film’s thoughtful pauses to shine. The dialogue is meticulously mixed, keeping it critically forward despite the naturalistic, thrown away quality of the readings. Terri is a basically a simple film, but the characters’ complexities are revealed more through timing and intonation than the actual words on the page, and the mix is highly effective at capturing those nuances.

A Look Inside Terri

This 10 minute featurette offers interviews and reflections from some of the principles. Jacobs goes into some depth on the practical concerns of filming on location at a high school, and his collaborative background with cinematographer Datum. Wysocki discusses his mentoring relationship with Reilly, and it seems to have mirrored their on screen personas. In all, it’s fairly conventional behind-the-scenes stuff, but the lack of information on Zadina and Crochiccia is a glaring omission.

This sequence contains 3 discarded segments, but to describe them as “Deleted Scenes” is a little deceptive. The first is a reblocking of the gym teacher scene that was included in the film. This version is a little coarse and grim, lacking a humorous background element that appeared in the final assembly.

The other two snippits are merely extensions of included scenes, with additional dialogue that really doesn’t go anywhere. At the very least, these sequences will give viewers a deeper appreciation of the fine work done by editor Darrin Navarro, along with the instinctual revisions Jacobs made, apparently on the fly.

Cineastes often wonder why American directors can’t make small, compelling films like the Europeans. And looking at the record, it’s a fair question. Many American indies, despite their noble intentions, ultimately seemed saddled with an unshakeable patina of shallowness; a facile artifice that prevents true hypnotic immersion. While Terri is guilty of occasional glibness - at times it seems like an adman’s idea of an art film – it manages to overcome its faults through special moments of unique chemistry and starkly organic performances. The film flirts with the cutes, but never succumbs thanks to Azazel Jacobs’ relentless attention to detail. His fascinating film gets viewers deeply into the mind of a big, lonely kid and, surprisingly, it’s a wonderful place to be.