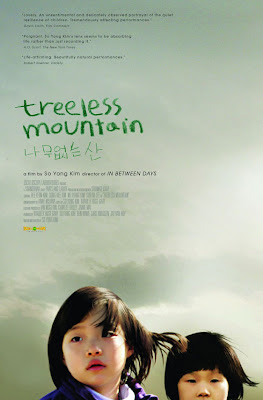 In Treeless Mountain, director So Yong Kim tones down the bleak introspection she crafted to dominant proportions in her debut feature In Between Days, in favor of a simple view of the world through the eyes of children. But Treeless Mountain is no lavishly illustrated fairy tale, but an agonizing story of tender innocents slowly swept into chaos by adult selfishness and irresponsibility.

Jin (Hee-yeon Kim) and Bin (Song-hee Kim), ages 7 and 5 respectively, live what appears to be a quiet, happy life in Seoul with their mother (Soo-ah Lee). Jin ambles off to school each frosty morning - her uniform complete with knee socks and maryjanes - while Bin goes to daycare where finger painting and frequent naps await her. But underneath Mom’s sheltering wing lies a heart laden with anger and desperation. Her husband abandoned the family months ago – positive male role models are alien to Kim’s playbook – and the time has come for her to venture out in a last ditch effort to drag Daddy home.

Kim carefully keeps the camera at the children’s eye level, and through long lens compression creates a sense of restricted view. The children lack a complete understanding of their circumstances, with small, palatable bits of information doled out like strained carrots, and the viewer shares their confusion and dismay. The unfathomable notion of adult perfidy has entered the gentle souls of Jin and Bin, with all its turbulent angles reflected in their innocent eyes. Kim’s insistence on tight close-ups of the girls has the feel of a Bergman-esque baring of the psyche, yet audiences are never allowed to forget Jin and Bin’s vulnerability despite their displays of courage and pluck. 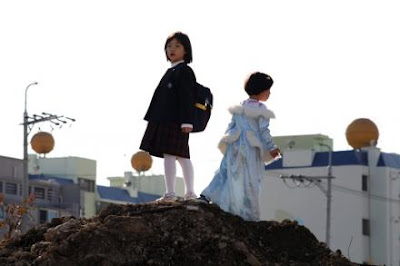 First, the pair is left for safekeeping with Big Aunt (Mi-hyang Kim), their Dad’s spinster sister. Childrearing is not exactly Big Aunt’s chosen field - that would be oblivion drinking – and under her influence the girls’ expectations and prospects begin to whither. When Bin is hit in the face with a rock by a neighborhood bully, Big Aunt confronts the hooligan’s family and, after a heated exchange, extracts payment for Bin’s medicine, which Big Aunt promptly spends at the neighborhood bar.

The girls’ once tidy playground is replaced by a nearby slag heap, where they futilely attempt to coax a dead tree back to life while buses and delivery vans roar past at breakneck speeds. Kim cleverly uses a piggy bank as a symbol of the girls’ deferred dreams; their mother vowing to return when the bank is filled. But as the girls launch amusing moneymaking initiatives (fried grasshoppers, anyone?), Big Aunt has her fill of domesticity, and dispatches the girls to their grandparents’ hardscrabble farm. 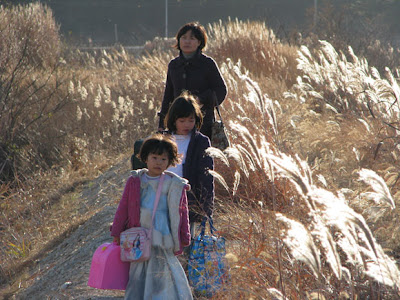 The film plays with scale, both of physical objects and emotional needs. The mountain in the title is actually just a discarded pile of fill dirt, but to Jin and Bin its lofty peak offers a fine prospect of the bus stop from which their mother departed. The dire plight of Jin and Bin is contrasted with two other examples of helplessness. The first is a young playmate afflicted by Down’s syndrome coupled with their surly, constantly complaining grandfather, both of whom are dependent on the attentive care of kindly women for their very survival. The girls stubbornly cling to the fantasy that their finally full piggy bank will harbinger their mother’s return, until cold reality inspires Jin to consider more selfless and beneficial uses of their earnings.

So Yong Kim has expanded her palette from the starkly minimal In Between Days to an impressive and quite challenging interpretation of the confusing swirl of adulthood from a child’s perspective. She somehow gets the very best from her impossibly young actors, who over the course of the film run a full gauntlet of emotions without the slightest hint of falsity. And while the film lacks a clear resolution, the ending doesn’t feel the least bit vague. Miraculously, Kim has reassured us that these virtual toddlers, despite the long and difficult path that confronts them, will be just fine.

"...is no lavishly illustrated fairy tale, but an agonizing story of tender innocents slowly swept into chaos by adult selfishness and irresponsibility."

Sounds poignant AND like something I should avoid if I am in a good mood?

Thanks RR.
I rarely watch good mood movies. If I did, my life would be so perfect and happy I could not stand it.
Plus, as a a devout Presbyterian, I must avoid excessive happiness at all costs.