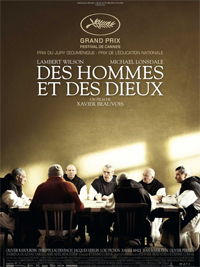 Winner of the Grand Prix at Cannes, Of Gods and Men is a film made with such sincerity and attention to detail that not a single moment feels false or contrived. Based on actual events, the story offers an explanation for the mysterious disappearance of a group of French monks from an Algerian monastery in 1996; an explanation that’s become all too believable and commonplace in the 15 years hence. It’s a tragedy foreshadowed from the film’s opening sequences, yet audiences are held spellbound as the divine and the brutal converge on a slow motion collision course.

As the monks, director Xavier Beauvois has assembled a wonderful cast of veteran French character actors – no household names but familiar faces to followers of European cinema – and these talents deliver performances of quiet conviction and refined control hewn by decades of experience. As the monks go about their daily tasks, a grinding mix of spiritual enlightenment and drudgery, Beauvois quickly establishes the demanding routine of monastic life, and the selfless nature of its adherents. Michael Lonsdale is extraordinary as Brother Luc, a former doctor who now dispenses both medicine and kindness to his Islamic neighbors as a hybrid Mother Teresa and Santa Claus. His practice is overseen by Brother Christian (Lambert Wilson), the monastery’s abbot and chief executive, who has devoted his life to a careful balance of the sublime with the practical. 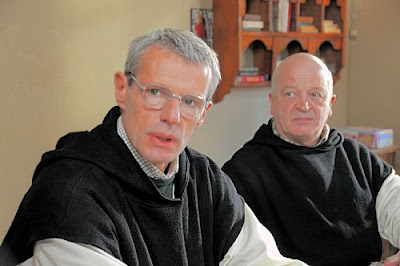 When the monks venture into the nearby village, their interactions with the impoverished Algerians reveal a mutual respect based more on humanism than the rigors of religious doctrine. But this peaceful, indeed joyous, coexistence is threatened by a dark new force in the world, as a radical Islamist sect begins a campaign of violence against foreigners. Soon the atrocities envelope the village and the monastery in an air of impending doom. The monks begin a protracted debate on whether they should flee to the safety of France or remain steadfast in their mission, despite the near certainty of a grim and bloody extinction. 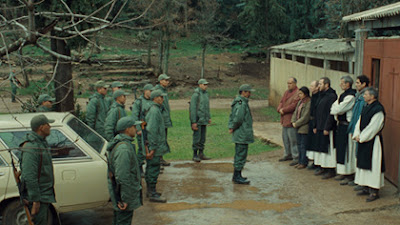 The barbarism faced by the monks is a degree of malevolence wholly beyond their experience. Beauvois gives near equal narrative weight to each man as he grapples with his decision in icy solitude. Their weathered, haggard faces register innocent dismay and disbelief as their minds process the imminent evil. The monastery’s daily routine continues, but the monks appear to exist in an emotional netherworld, stunned but oddly intrigued by this new and deadly challenge to their faith. In these reflective passages, the film creates a hypnotic sense of the stoppage of time, as each man begins an unspoken galvanizing of his soul in preparation for the answering of humanity’s ultimate question. 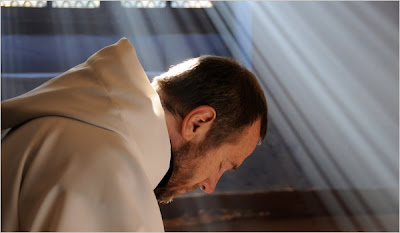 In a risky sequence set to music from Swan Lake, Beauvois embarks on a series of dolly shots that grow ever tighter on the faces of his beleaguered monks; each man remembering the individual triumphs and defeats of his life in solemn, heartbreaking reverie. A lesser director would not have placed such trust in his actors, and instead inserted flashbacks or monologues to convey this pivotal moment. But Beavois’ approach is all the more powerful for its refusal to spill every detail, reinforcing the ultimate loneliness of death, even to those who have devoted their lives to collective Godly service. 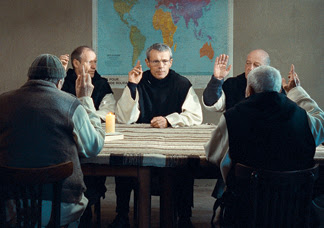 Like the monks’ harmonious chants, the film’s Bergman-esque conclusion strikes an elegant yet simple chord, and almost seems anti-climactic. For these humble ascetics, any connection to this world was always tenuous at best, and the film resolves their story with whispered notes of mystery and mercy. Through perfectly grooved performances and an irresistible editorial rhythm, Of Gods and Men creates its own higher plane of existence, and transubstantiates a mere movie into food for the soul.
at December 05, 2011

A really wonderful review. I liked the 'whispered notes of mystery and mercy'. Another must-see for my list. Last weekend I saw both the documentary An Inside Job and Margin Call. It's a new genre, the white collar mob film.

Thanks Bob. Margin Call has been on my list for awhile. I'm glad movies are finally starting to deal with the REAL criminals :)