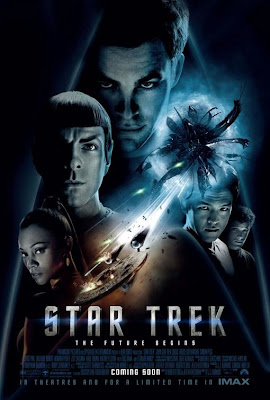 This prequel of what Trekkies call “TOS” (the original series) is all flash and speed and action and doesn’t have an idea in its head. We see how the famous Enterprise crew met and through skill, bravery, and despite appalling personal shallowness, forged themselves into sci-fi icons. The catalyst for this nonsensical story is a sociopathic Romulan named Nero (Eric Bana), owner of the most unfriendly looking spaceship you’ve ever seen, running around destroying planets by turning them into black holes.

He accomplishes this by… wait for it… drilling holes in them. But he’s actually from the future, and spoiling for a fight with the federation because Spock was unable to save his planet from destruction 120 years later. Confused yet? Newly minted Star Fleet Academy grad James T. Kirk (Chris Pine) is pressed into service aboard the Enterprise which is the only functional starship in the vicinity; all the others are sitting in a cornfield undergoing maintenance. Apparently, starship construction will be something of a growth industry in the Iowa of the future, and it’s nice to know that one day good paying jobs will return to the American Midwest. 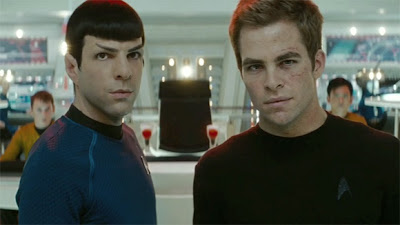 Kirk finds a young Spock (Zachary Quinto) firmly ensconced as first officer aboard the Enterprise. This Spock’s personality is a mix of logic and elite snootiness and he and Kirk have a long way to go if they are ever to be BFFs. It doesn’t help that they both have eyes for the same girl, the fetching young Uhuru (Zoe Saldana) who in this version was apparently a big hit at Academy frat parties. The movie gets sillier as it proceeds, and there are phaser battles and fistfights aplenty before Kirk and Spock discover an odd whirly-gig spaceship that may be human-kind’s only hope. 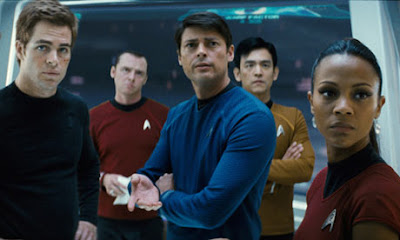 The acting here is actually quite serviceable, Quinto in particular, and there will no doubt be other movies featuring this young Enterprise ensemble saving the universe. They can start by saving us from these script writers.

Funny... and I loved the movie! Can't disagree with a single one of your comments though. I'm confused, did you write a shorter version of this on Netflix?

This is a new review for me, so I'm not going to submit it to NFLX until their current problems are resolved.

Lots of folks loved this movie...I'm clearly in the minority.