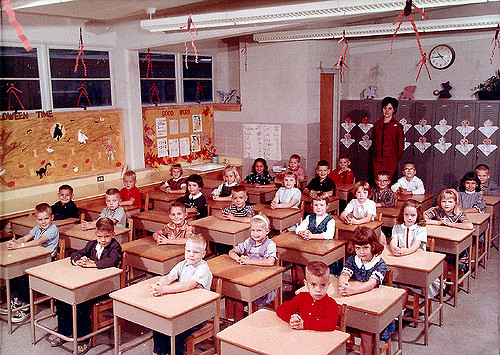 With the odious Mrs. Eichel safely ensconced in a dark corner of the county office building, free to obsess about head lice to her heart’s content, there was much speculation in our community about who might take over teaching the first grade. Many thought that surely an experienced teacher would be transferred from some other school - at least that was the hope - since it seemed unlikely that a well-qualified candidate could be found on such short notice. However, the school board had one more surprise up its sleeve when they hired a newly minted graduate of Longwood College - in those days virtually every Virginia schoolteacher was a Longwood product - named Miss Bradshaw. It’s possible she didn't quite have all of the required certifications. But she was close enough, and the school board was desperate enough, to give her a go.

As a teacher, what Miss Bradshaw lacked in experience she made up for in enthusiasm and raw dogged determination. And she would need every bit of it. In those days we had no kindergarten or educational TV shows like Sesame Street - at least not in our area - and most of us brats showed up on the first day of school without knowing how to read a single word of English. Miss Bradshaw, through constant repetition of the adventures of Dick, Jane, Spot and their strange cat Puff, literally pounded into us a rudimentary command the language. Of course once you teach a person to read the entire world opens up to him. And for that, I will be eternally grateful to Miss Bradshaw.

Now don’t get the idea that it was all love of learning and nose to the grindstone. We were a bunch of first graders after all, not an order of devoted monks crafting illuminated manuscripts. We had our share of disciplinary problems and fidgety kids who couldn’t behave. They posed a challenge for Miss Bradshaw, who was a soft-spoken, compassionate person and not authoritarian by nature. She slowly got the hang of it though, and within a few weeks she was barking out loud threats and stern admonitions with the best of them. She had a couple of allies in this battle. While not a classically beautiful young woman, Miss Bradshaw was immaculately groomed with graceful posture and was quite presentable in her array of pastel twinsets. However, she did have a rather odd birthmark; a slightly discolored stripe about half an inch wide that ran vertically from her widow’s peak to just above her nose. Most of the time it was barely noticeable, but when she was vexed or stressed, her stripe would turn a deep magenta color. It could be quite unnerving to a little kid, as if an Orwellian heat ray was about to erupt from the deepest recesses of Miss Bradshaw’s brain, incinerating everything in its path.

Occasionally, a child had gone too far to the dark side to be chastened by Miss Bradshaw’s fuchsia forehead. In that case, she had to invoke the nuclear option of disciplinary actions: a trip to Mrs. Green’s office. Mrs. Green was our school principal, a 40 year veteran of the county education system and a complete burn-out. She simply had no patience for hellish, recalcitrant kids, and when one was presented to her, she promptly turned the offender over her knee and spanked the living tar out of him. For older students too big to manhandle, she had a large wooden paddle custom made by her husband in his cabinet shop. Mrs. Green became quite skillful in its use, and over the years had wielded the oaken weapon on snotty seventh graders and haughty high schoolers alike.

Mrs. Green was only a couple of years from retirement - an event both she and the school board were greatly looking forward to - but her proximity to leisure in no way dampened her enthusiasm for running a tight ship. She became a sort of iconic figure in our community, and both children and adults often reported having nightmares that featured Mrs. Green’s pitch black presence. 15 years later, when as a college student I saw the film Star Wars for the first time, the similarities between Darth Vader and Mrs. Green were striking, and distracted me to the point of queasiness. And like Darth Vader, Mrs. Green was rumored to have been a jovial, pleasant person in her younger days. But four decades of putting up with students, parents, school administrators and their associated crap had transformed her into an avatar of draconian dread. Mrs. Green was also rumored to have kept a bottle of Jack Daniels in a locked drawer in her desk, but no one seemed to mind. In fact many folks speculated that it might actually improve her glowering disposition.

Of course these days Mrs. Green would be permanently banished from the teaching profession and possibly locked up in the hoosegow for her harsh disciplinary tactics. But back then no one dared question the wisdom or motives of those charged with educating America’s youth. Truth be told, many parents secretly thought their misbehaving children deserved a good sound thrashing from time to time. That’s how they had been raised and, in southern Virginia in 1962, the way Grandiddy did it was the only way to do it. I was generally a well behaved kid and was able to avoid a direct hit from Mrs. Green’s loathsome lumber throughout my scholastic career. But there was one occasion when I caused Miss Bradshaw’s facial stripe to go Code Red, and for the absolute dumbest reasons. And I’ll tell you all about it next time.

Thanks for these memories and for the picture.