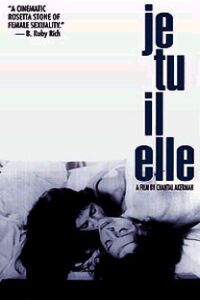 Chantal Akerman’s early experiment is more a three act assembly of scenes than conventional cinema. In the first act, she rolls around on the floor in a sparsely furnished suburban apartment, while eating bags of sugar and trying to piece together scattered pages of a script. In Act 2, she bolts the apartment and hitches a ride with a trucker (Niels Arestrup) and over a period of a few days his sleeper compartment gets quite the workout. Act 3 is one long – and I do mean long – lesbian love scene that’s remarkably unerotic. The second act is by far the strongest, with Arestrup adding a much needed reality counterbalance to Akerman’s introspection. One wishes this story had been expanded to feature length and the other vignettes discarded. Akerman has gone on to a long and prolific directorial career, known for her challenging and controversial films. Devoted fans will be interested in this unrefined glimpse into her humble beginnings, but be advised it’s not a film designed for the general public. And that’s putting it mildly. 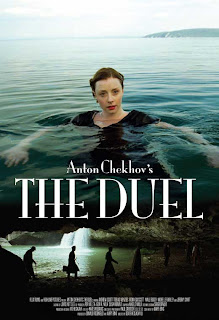 The Duel features some wonderful acting and detailed period production, yet it never quite shakes the tasteful chains that make it seem like a big screen version of a Masterpiece Theater installment. Set in a Baltic Sea beach town, Andrew Scott stars in this tale of rural decadence as a young, dissolute dandy who has fled Moscow after stealing another man’s wife (the very hot Fiona Glascott). The film hints and nudges and frolics with the concept of honor, as self righteous neighbor Van Koren (icy Tobias Menzies) elects to make a stand for all that is decent and good – in his foolish mind, anyway. The film has some issues, in particular Scott who, despite a solid performance, looks and sounds so much like Mark Ruffalo that it all gets a bit distracting. The Duel has been deified by a number of critics, but despite oozing good taste and decorum, it’s at best only ok. 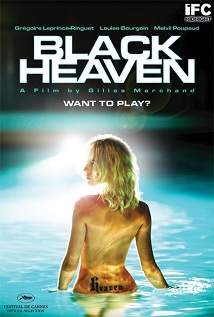 Gregoire Leprince-Ringuet, who you may remember as Louis Garrel’s gay fling in Love Songs, has the lead in this Hitchcock–style thriller. A missing cell phone leads to romantic obsession with a sensual bottle-blond (Louise Bourgoin) and some twisted dealings with her dangerously unbalanced brother (Melvil Poupard, who gets better with every film). A computer game is used for narrative propulsion and, surprisingly, it actually kind of works. Indeed, none of the film seems as preposterous as it should, so give long time writer turned director Gilles Marchand a healthy dose of credit. In all, Black Heaven is a lightweight, middle of the road entertainment that has the good sense not to overstay its welcome.
at May 21, 2011

Hi Bunchie, again a series of great reviews. I remember seeing Akerman's Jeanne Dielman, Jeanne Dielman in a small arthouse in my birthtown. That film is also long - and I mean long too;) Many people left the cinema during the first half of the screening. During the much needed interval the few remaining others decided that we would stick together and stay. It was hard but we made it. For me it was an unforgettable experience, but I must confess - I have never seen another picture of Akerman since.

LOL, great story Bob. Ms. Akerman is an aquired taste that has eluded me as well. But she has somehow been able to make many, many films over the years, so she must have an appeal of some kind. I keep looking for it :)