I stumbled on this while sorting through papers at my parents' house. It's a magazine/catalog for the Columbia Record and Tape Club from November 1973. Club members received these in the mail every month.

Right click on the image, then left click on "Open Link in New Window" to get a zoomable enlargement big enough to read... 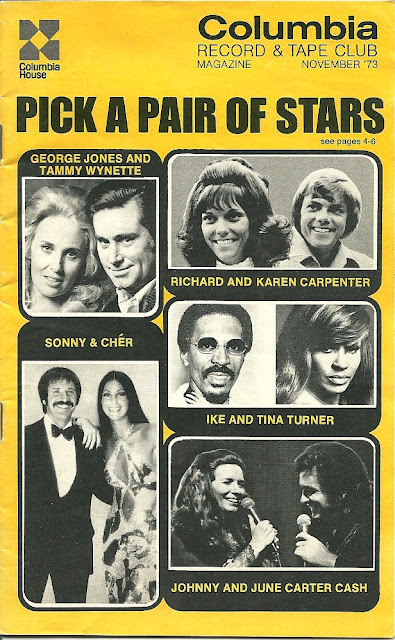 In those days, albums were available in LP, 8-Track, cassette or ubersexy reel-to-reel. And if you wanted that month's selection you need do nothing! 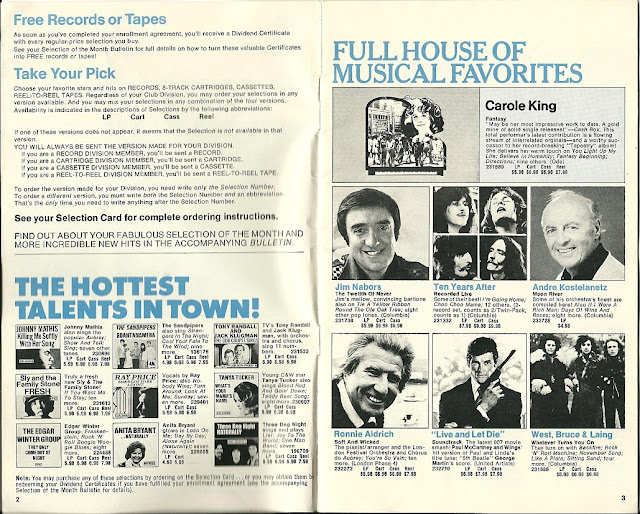 The theme that month was famous musical duos, including Ferrante and Teicher who appear to have had special toupees made for the occasion. 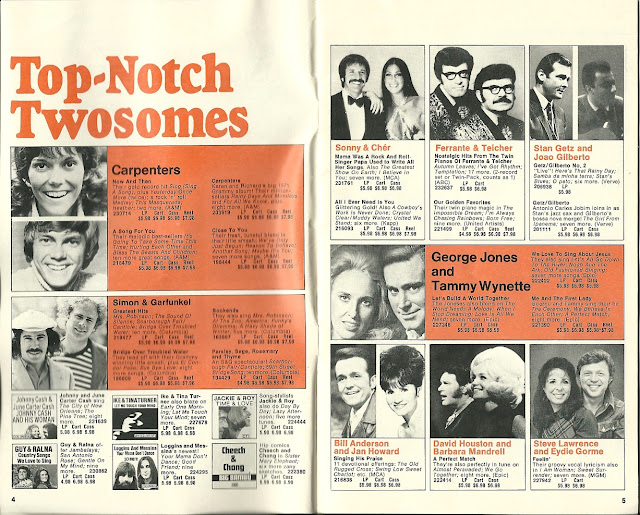 Next were the rock selections.  I wonder whatever happened to Blue Mink? 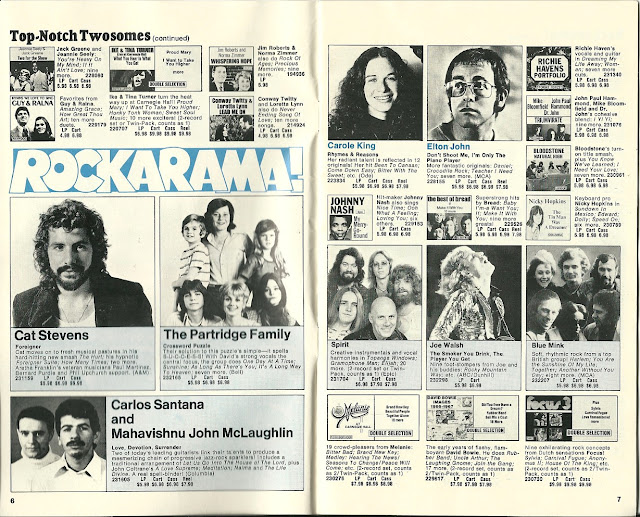 Then we get into Pop and Easy Listening. Imagine being the writer that had to come up with these album blurbs. It must have been difficult to find fresh ways to say basically the same thing over and over. 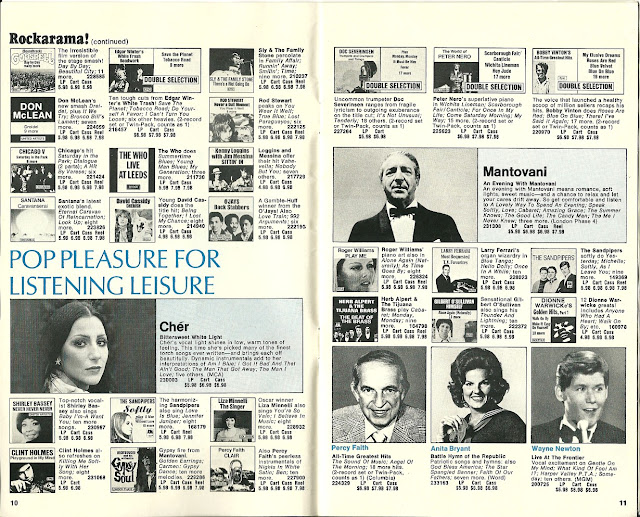 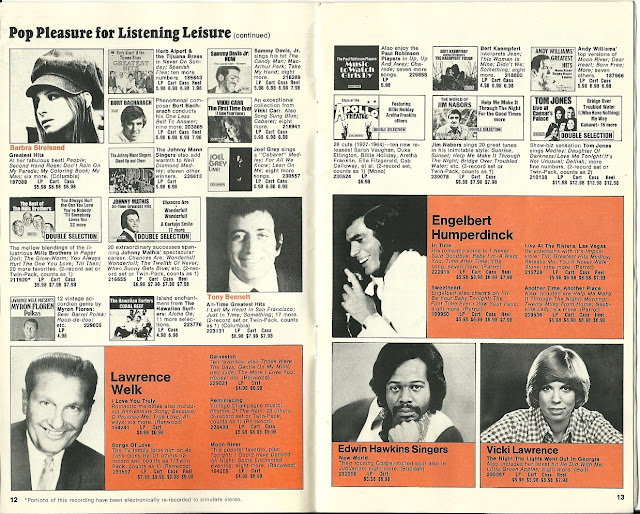 Here's some Country selections. It's surprising to see Jimmy Buffet in this category. And weren't Redd Foxx albums a little risque for Columbia? 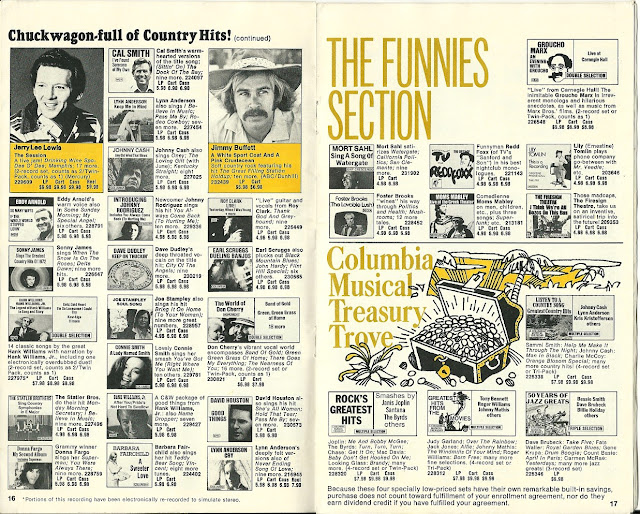 Then we have a sort of genre free-for-all. Seiji Ozawa only recently had to cut back his schedule due to age and health. He's been conducting a long time. 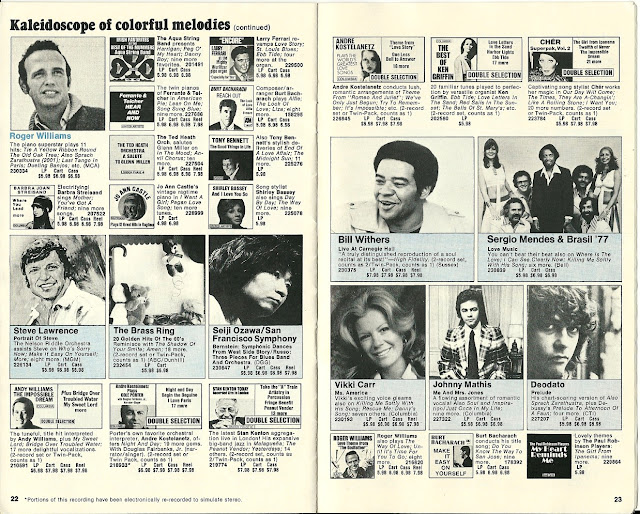 And here we have a belly dancer and Boot Randolph side by side with Beethoven and Bach. Boots had a great career as a country-western sax player, of all things. If you ever watched Benny Hill, you've heard Boots. 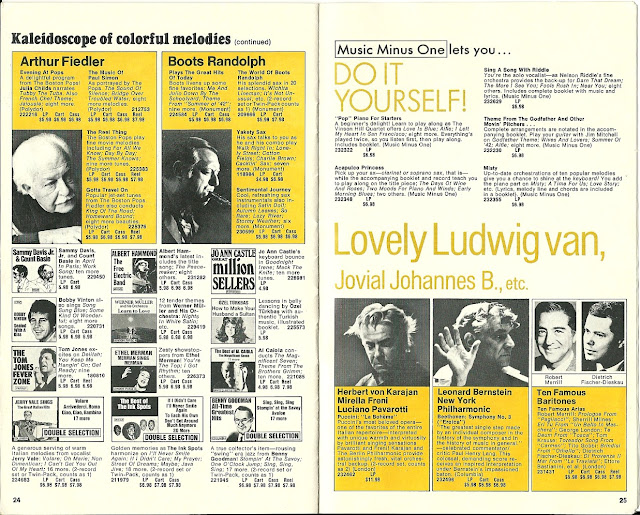 Here we have the entire Jazz and show tune selection, pretty pathetic. One of the soundtrack albums even features the N-word. Amazing. Columbia Record and Tape Club was definitely not geared to the musical tastes of urbane sophisticates.

On the right is an offer for a gizmo to store your 8-Tracks. Even in today's dollars 14 bucks plus shipping seems a little pricey for a box that only holds 24 tapes. 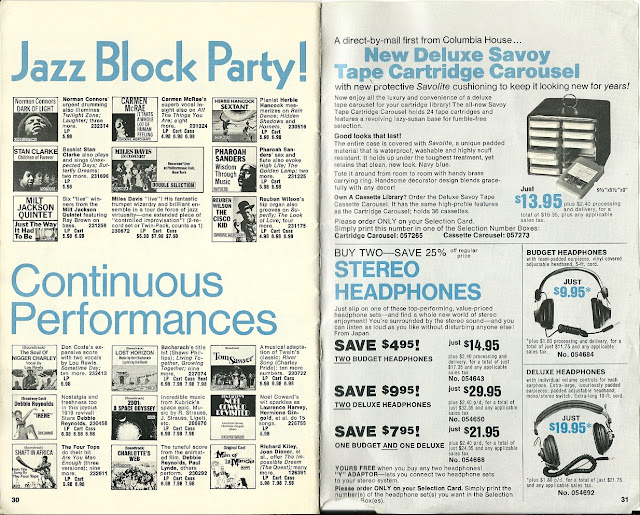 This is cool! I joined in about 1984 and was with them or BMG pretty much till about 1990. First albums (LPs), then CDs. I almost never took the "choice" album, but I always sent my card back with my alternate choice so I never really had any trouble with them the way many others did. I used to buy 4-6 albums a month so it really did save me money.

Where would you place Jimmy Buffett? Maybe with Cat Stevens?

Retrohound.com is where Blue Mink went.

Good question...as a Parrothead I would place Buffet in there with Mozart and Bach!

Supercool Blue Mink cover. It's true folks, www.retrohound.com really does have everything!

What a head-trip, Mr. Anderson. I was a re-joining member many times, racking up the selections, paid for with lawn mowing money. Every arriving package was like Christmas. Great days.

I can just picture you Anon, bravely protecting the lawns of Memphis from kudzu intrusions, all the while dreaming of that new Brandenburg Concerto due to arrive in tomorrow's post...