Days of Future Passed Part 7: Once Upon a Timeshare 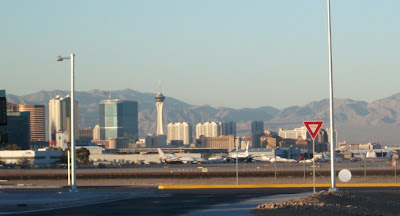 Somewhere in the annals of real estate marketing exists a set of gold tablets bearing the names and phone numbers of People Who Will Sit Through a Timeshare Sales Pitch, and apparently my name is engraved close to the top. Over the years, Mrs. Undies and I have been seduced by this profession’s siren songs, promising free weekend lodging in Paradise provided we are willing to attend a presentation of approximately 90 minutes. Truth be told, we’ve always gotten the better of the deal, enjoying the splendors of Myrtle Beach, Scottsdale, Sedona and Santa Barbara, to name a few, completely gratis. And sometimes a sumptuous breakfast is included.

Yes, we do have to endure a tour of the facilities and the inevitable high pressure “sit”, but this family has always resisted temptation and pushed ourselves away from the table without ever taking pen to paper. Our “sales consultant”, denied yet another plum contract, eventually gives up and, with a handshake and a forced smile, decides to cut his losses and move on to the next sucker.

The fact of the matter is that I will never buy a timeshare, plain and simple. For one thing, the idea of taking a vacation at the exact same place at the exact same time every year is kind of depressing, and seems like a terribly uncreative way to spend one’s leisure. And yes, supposedly you can trade for weeks at other properties, but the exact methodology of doing this is never explained, and the whole thing seems so exhausting you might be better off just spending a quiet week at home.

I also doubt the worth and reliability of a product with such a wildly varying price. Most time shares cost about $30,000 at the beginning of the sit but, by the constant shaking of one’s head, it will eventually drop to $4,000. The desperate New-Age commune in Sedona even got down to $2,400 before finally throwing in the towel and branding us irredeemable cheapskates.

Now, before you think ill of me for wasting the valuable time of commissioned agents, I make my intentions quite clear in the early going, and state unequivocally that we are only here for the free digs and greasy bacon. Some reps understand this, and go about their pro-forma pitch with a breezy, devil-may-care casualness. Others are convinced they can change our minds, and commence to aggressively proselytize for their resort, pointing out perks and benefits only an idiot would refuse. 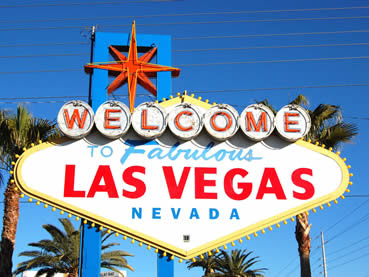 Unfortunately we had one of the latter during a recent junket to Las Vegas. I received a call one afternoon from Amalgamated Acme Zenith Resorts International, or some such claptrap, promising a free stay at one of their magnificent condos overlooking the Strip. We would be given access to all amenities provided we let a salesman beat on us – well she didn’t use those exact words – for 90 minutes  And, if I agreed right now, good ol’ Amalgamated would throw in two tickets to a popular show.

Well, as regular readers of this space know, the past year has been a rather crappy one so the idea of a free weekend in Sin City took on a certain luster. After a brief consultation with my much better half, I consented and a few days later we were wheeling up US 93, our sights set on a weekend of depraved debauchery which, at our age, consists of penny-slots and overeating.

The location, as promised, was indeed right on the Strip, in a gleaming new high rise. Upon our arrival though it was clear something was missing; namely, no casino and no restaurants. It was a typically generic apartment building foyer - a wall of mailboxes, a few potted palms and quiet as a crypt – perfectly fine for Chicago or Cincinnati, but certainly none of the decadent glitz that lures millions of visitors to Las Vegas each year.

A moderately surly concierge oversaw our check-in – after assuring me that this was, indeed, the right place – and after a brief elevator flight we found ourselves in our lovely 600 sq. ft. home away from home. Again, as promised, there was a view of Las   Vegas Boulevard, at least of The Stratosphere, our neighboring property to the north, and its gigantic electronic billboard where a scantily clad lass pretended to be Brittany Speers in a video segment so flashily edited I was afraid it would induce some type of seizure. 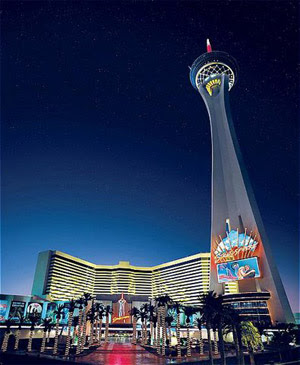 The Stratosphere has never been one of my favorite Vegas haunts. I’m sure it’s a perfectly fine casino, but to me the adjacent tower has always looked too flimsy to support the giant gold ball that adorns its apex. Still, it’s been operating for decades with presumably minimal fatalities so what do I know. To the northeast were the remains of the recently closed Sahara, a classic Vegas joint from the Rat Pack days, which unsuccessfully tried to reinvent itself as a NASCAR themed pleasure dome. When the economic bubble burst a few years ago, the Sahara circled the drain resiliently for awhile, but ultimately it was sucked down into the sewer of the over-leveraged. 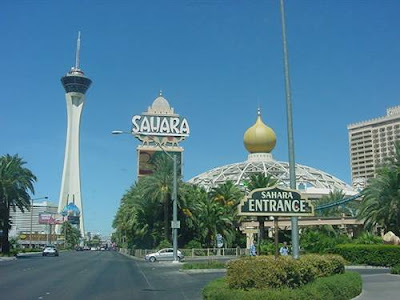 Since I wanted to get our personal bloodletting over with early, we returned to the lobby where I had arranged for our dutiful sales consultant to meet us straight away. The moderately surly concierge informed us that we would be meeting with Brice, and in short order, a younger, hip-hopper, barely legal version of Mitt Romney greeted us with beaming, enthusiastic hellos and tendon-ripping handshakes. Brice escorted us through some sliding doors that he activated with a top-secret buzzing device, and we soon took our place at a set of utilitarian plastic chairs around a slick Formica table; just the right height for signing reams of contract papers. After an overly lengthy exchange of pleasantries, Brice finally applied his gelled head to the task at hand.

“So, how’s your apartment?”

I conceded it was very nice and spacious. I then informed Brice that I never had the slightest intent to purchase anything on this trip, and we were only here to take advantage of the freebies. And I would certainly never buy a Vegas condo that offered none of the things people actually come to Vegas for. So, he could relax during this pitch and if he could see fit to cut it a bit short, all parties would benefit.

“What do you mean none of the things people come to Vegas for?”

“But there are casinos all around! We’ve got the Stratosphere right next door!”

“My husband is afraid of the Stratosphere,” my wife said helpfully. 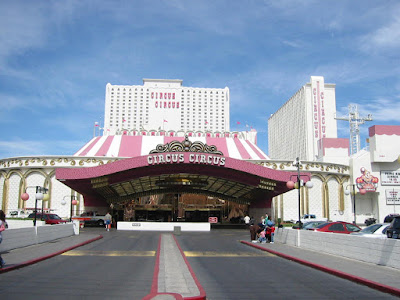 “Brice, have you ever been to Circus Circus? I have. It smells like pee. I have a theory. Years ago, some patron with superb kidney function relived himself smack dab in the middle of the casino. By the time a maintenance crew arrived, the acidic urine had eaten through both carpet and pad all the way to the structure’s cement slab, where it was permanently absorbed like a concrete etching stain.”

I pressed on. “And what about restaurants, Brice? There’s nowhere here to eat…”

Brice chuckled, “This is Las Vegas, guys! There’s a great restaurant on every corner. And if you get hungry, we sell snacks at the front desk!”

“Yes, a fine selection of Cokes and cheese doodles” I harrumphed, while Brice nodded approvingly. It was at this point that I realized we were dealing with a moronic corporate jingoist, and argumentative to boot!

“Well, let me show you the rest of the property. We’re in the middle of a multi-million dollar renovation, which means these units are currently offered at an outstanding discount. But you’ve got to hurry, because once the work is done the price will go waaaaaayyyyy up!”

With a quick brandish of his magical buzzer, another set of doors opened, and soon we were walking the grounds with Brice in full throated pitch mode. He escorted us past an empty swimming pool where a plastering crew had recently held forth, their machinery and implements scattered hither and yon but, currently, there were no workmen to be found. Brice assured us that the pool would be ready soon, refitted with solar heating, a waterfall and open until 10 pm.

He then led us past an exercise room complete with the best fitness equipment one could buy 20 years ago. Brice informed us that the workout room would be remodeled as well, and outfitted with modern, state-of-the-art gizmos that would allow patrons to check emails while tread-milling. I conceded that an exercise room was a good idea, especially since there was no gambling, eating or partying and we’d need something to do all day.

We were then shown a phalanx of empty assembly rooms, perfect for those corporate meetings we all know and dread. Everything was as expected; but there was no excitement or pizzazz, none of that thrilling sense of possibility that makes Las Vegas a popular destination. We might as well have been touring a Holiday Inn in Oklahoma   City.

Meanwhile, enthusiastic young Brice continued his prattle and eventually we were led to the “Party Room”, a cavernous renovated space that he clearly considered the resort’s Killer App.

“As you can see guys, this room is awesome. We’ve got 14 TVs, with NFL Season Ticket. There’s a bar over there with a commercial refrigerator and icemaker. We’ve got café seating for 150, a pool table and a wall of dart boards. And best of all, as owners you can rent the space whenever you want. Just think! So many possibilities! Birthday parties, family reunions or just hangin’ with your homeys…”

The thought of flying ancient Aunt Elizabeth across America to watch television and eat cheese doodles caused a brief intestinal distress, and an apparent brain freeze, because the only response I could think of was “Homey don’t play dat.”

This prompted gales of laughter in Brice. “Homey don’t play dat! Wow I haven’t heard that in forever! It’s like from the Eighties! Man, that’s old school!”

Brice’s ninety minutes were up.

“Of course it’s old school, you nitwit. I’m fifty-five freaking years old. Everything that passes through my addled brain is old school. Now, if you don’t mind, we elders would like to spend the little time we have left on this Earth not listening to an empty haircut bullshit us into buying a timeshare at the one building in Nevada where fun is forbidden! I know gambling is not allowed here, but I’ll make you a bet. Your beloved Amalgamated International HooHa will go bankrupt before the first drop of water goes in the pool. Mark my words!”

After a few moments of stunned silence, Brice apologized for offending us in any way, and assured us it was not intentional. He also apologized for the resort not fulfilling our needs and offered his total understanding of our desire to “go in another direction.” He would end the presentation now, and he hoped we would enjoy the rest of our free weekend.

As we turned to leave, a slight glimmer of guilt rising in my gullet, Brice said, “Oh guys…wait a minute.”

He then reached into his shirt pocket and produced a small envelope. “Here’s the show tickets we promised you. Have a great time.”

On the quiet elevator ride back to our perfectly nice free apartment, I felt quite awful. I’d been way too hard on ol’ Brice. He was just doing a job, and a thankless one at that. I then opened the envelope  where I found two tickets to the NASCAR Experience at the Sahara. The late, lamented Sahara.

Immediately, I began to feel better….

Are you reposting old stuff just to see if we are paying attention?