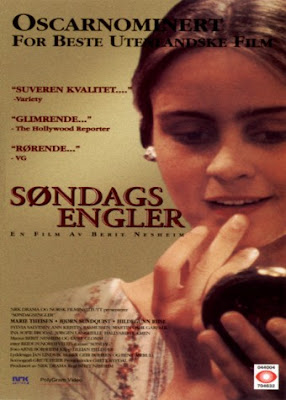 It’s summertime in Norway, and a pert, innocent young bundle of raging hormones named Maria (Marie Thiessen) is wandering the countryside trying to make sense of her new interests and impulses. Set in the early 1900s in one of those stuffy, straight-laced Scandinavian farming villages that depressed Ingmar Bergman to no end, Maria spends the bulk of her sunny days trying to find some morally acceptable outlet for her new, confusing sexual energy. 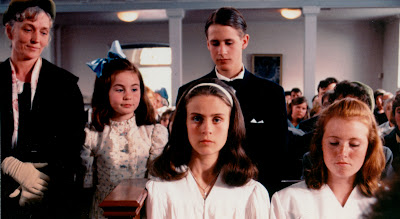 The Other Side of Sunday was nominated for an Academy Award in 1997, and while not a great work, it does have a strangely engaging drive to it. Surprisingly, many of the early scenes have the look and feel of bad 70s porn; missing only the distant wailing of a wa-wa pedal to complete the effect. On one of her daily rambles in the woods, Maria discovers stogy Mrs. Tunheim, one of the pillars of the community, stark naked and wading into a stream for a bit of skinny dipping. Maria hides in the bushes and secretly watches the aquatic frolic - the first display of sensuality she has ever witnessed – and thoughts of mysterious pleasures fill her mind and she can’t escape them.

Maria’s dad (Bjorn Sundquist), the stern and emotionally distant town minister, is totally out of his depth when it comes to understanding his daughter’s distress, and she turns to bible reading in hopes of finding solace. But comically, Maria discovers the ancient texts brimming with passion and thinly veiled sexuality. She then begins to see prim Mrs. Tunheim as a role model and kindred spirit. But furtive nude bathing is not the only secret this matronly woman is hiding, and Maria is in for some hard lessons about faith, trust and truthfulness.

Stories about young girls coming of age are a staple of European cinema – like movies with lots of explosions are to Americans – and this type of film has been done many times before. But, while not a shining example of the genre, The Other Side of Sunday manages to establish a rumbling sort of momentum that’s appealing. We find ourselves coolly but pleasingly immersed, just like Maria when she shyly attempts her own naked commune with nature.

And I Am Following Your Blog Now

A few weeks ago I was for the first time in Norway. It was amazing to see the amount of Norwegian films in the cinemas of Oslo. I think a third of all the movies that were shown there at the time were Norwegian. Our understanding of the Norwegian language is zero so we chose for two American movies (The American and Inception) and we enjoyed both, but I am interested to see more of the Norwegian cinema.