Reviewed by Shu Zin
After seeing and being well-impressed by IT RAINS IN MY VILLAGE, I pursued some more of Dusan Makavejev's work. As I saw three additional films, (LOVE AFFAIR, or THE CASE OF THE MISSING SWITCHBOARD OPERATOR – not bad at all; MAN  IS NOT A BIRD – so-so;  INNOCENCE UNPROTECTED - weird and amateurish.)  I came to like his work less and less, culminating with a defensive 2* rating I’m awarding SWEET MOVIE. I shoulda had the onions to give it the one star it deserves. 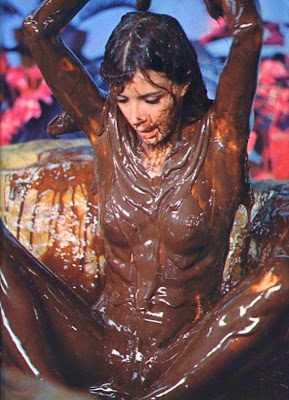 This flick is not, as some opine, unclassifiable; I could classify it with a 4 letter word: MESS. That’s the polite version. I think the introduction of historic news footage of scenes of the unearthing of murdered Polish soldiers and intelligencia at Katyn is in the basest possible taste, disrespectful of the historic event, and a disservice to anyone appreciative or even aware of the atrocity that the place represents. Most people probably have no idea of the history of Katyn, and Makavajey exploitively just sticks it in there like it was something he had in a file cabinet. 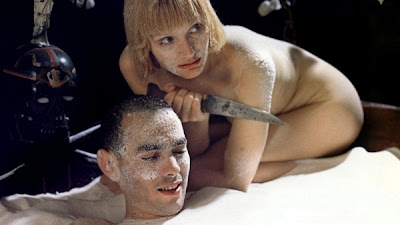 The “extras” interviews with the director and a female film expert “espraining the Eastern European sensibility and the film’s deeply political intentions… don't make it any more accessible, in my view. The woman film expert sounded like a horse’s posterior. Both the interviews are babblings of pretentious academic bores who think they’re hot stuff, especially Director Makavelev, and the film itself is a tasteless hodgepodge, poorly conceived and badly produced. See it anyway. Misery loves company. IT RAINS is the most interesting and accessible of Makavejev's films I'm likely to see. This one was downright insulting, utterly grotesque nonsense, the product of an opportunistic, confused con artist with a hugely inflated ego.
Reviewed by Shu Zin
at September 04, 2011

Saw it in about 1980 while still in college, when it found it's way to Kansas State University's student union. Hate, hate, hated it then, hate it now.

I've never seen it, but it sure evokes a reaction in people. This review had been one of the most visited on the blog.