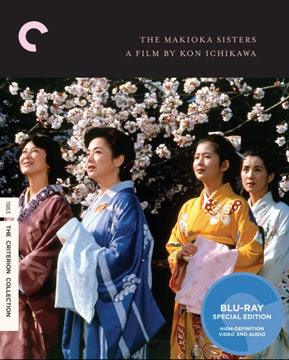 The Makioka Sisters is a story as spare and delicate as rice paper, told with an ethereal silken shimmer. Through the complex machinations of an upper class Osakan family circa 1938, director Kon Ichikawa builds a flashpoint in the conflict between the staid traditions of Japanese culture and the liberated yearnings of the modern world. The film’s surface features the placid opaqueness of a formal tea ceremony, but simmering deep within the pretty porcelain are the fears and confusions of a family, and a national culture, in the midst of profound transition.

The subjugation of individual identity and the struggles of those who quietly rebel is a recurrent narrative motif. Ichikawa constructs a visual cognate with gorgeous scenes of the changing of the seasons. Just as springtime cherry blossoms will eventually give way to gently falling snow, the conflicts within Japanese life – unwanted responsibilities to the long dead and adherence to prescribed patterns of living – will inevitably cause increasing friction and slow, lingering heartbreak. While some of the protagonists mourn their ultimate sense of loss over what might have been, others find comfort and strength in traditional methods and priorities. And, as viewers will learn, making one’s life choices based on community opinion may appear clean and simple, but it requires a spiritual servitude starkly at odds with the individualist ideals of the 20th Century.

When their parents died years earlier, the Makioka family’s successful kimono factory was passed down to the four female children. 40-ish Tsuruko (Kieko Kishi) was thrust into the role of leadership along with her impassive, distant husband Tatsuo (Juzo Itami). The arrogant couple wears the many efforts they have undertaken on behalf of the family like a martyr’s badge of sacrifice. Second oldest daughter Sachiko (Yoshiko Sakuma), a woman of great empathy, often finds herself pulled in a variety of directions, as she attempts to balance the needs of family honor with the questioning nature of a new, ascendant epoch. That creed is personified by the two younger sisters Yukiko (Sayuri Yoshinaga) and Taeko (Yuko Kategawa), who only faintly remember their revered parents and feel little allegiance to ancestral imperatives.

With this broad spectrum of ages and ideologies, Ichikawa sets an appealing table for his tale of generational conflict; a tale replete with shifting alliances and clearly demarked symbolism. The bulk of the family’s inner-intrigues take place in the dark, mystical setting of their living quarters, complete with shoji screens and tatami mats, while they greet visitors and execute their carefully hatched schemes in a sunny, Victorian-furnished drawing room. While the stern Tsuruko holds on to her sisters’ dowries under the guise of safekeeping, she’s not above using the money as a weapon, bludgeoning any rebellious sibling into line. It’s also her last remnant of authority, as the young girls she was forced to raise have now grown into full womanhood, and reward her perceived sacrifices with tacit resentment. Young Taeko, whose thirst for independence is manifested by a string of secret lovers, risks the family’s public pride in a bid to escape Tsuruko’s dominance, while Yukiko retreats to extreme introversion and daydreams of forbidden romance.

According to societal rules, the painfully shy Yukiko must marry before the youngest sister Taeko, and the exhausting efforts to find her a husband comprise a number of subtly amusing scenes. This project is led by Sachiko’s kind hearted husband Teinosuke (Koji Ishizaka), and he travels hither and yon to find his sister-in-law a socially acceptable mate. But his search is layered with quiet guilt and poignant irony, for inside Teinsuke’s heart resides the real reason for Yukiko’s impending spinsterhood. And for a story nominally about the tribulations of four sisters, it is actually Teinsuke who emerges as The Makioki Sisters’ most compelling and tragic character. After years of suppression of his own identity – as social inferiors, the husbands were required to adopt the Makioki surname – Teinsuke has slowly made room for his own modest, subdued revolts. The revelations hidden beneath his quiescent exterior make him a flawed hero of surprising complexity and a resonant illustration of the perils of deferred happiness.

Ichikawa draws flowing thematic lines that both equate and contrast the changes of the natural world with the changes in human society. His thesis is validated by the matronly Tsuruku, who welcomes and enthusiastically celebrates the changing of the seasons, but is wholly resistant to any degree of transition within her family. When faced with a momentous change she is powerless to stop, Tsuruko’s emotional armorplate becomes even thicker, and she risks the tranquility of her clan out of an outdated and pointless notion of civil propriety. Ichikawa is able to balance these concurrent storylines with the leisurely control and confidence of a consummately skilled artisan. He is on no schedule except his own, and the film’s slowly unfolding exposition will be a challenge to some viewers. But, like a chess master about to pounce, once the director has painstakingly deployed his narrative elements, the film begins to immerse and absorb, and the viewer is captivated by The Makioka Sisters’ austere images and relentless, hypnotic rhythms.

Disc Review
Presented in the original aspect of 1.85:1, the transfer is luscious and pristine, capturing the jeweled tones of the sisters’ handcrafted silk kimonos with glistening detail. Cinematographer Kiyoshi Hasegawa’s recreation of natural light is extremely convincing, and he imbues the close ups with a luminous quality that makes skin tones seem to glow against his subdued backgrounds. In keeping with the principles of Asian design, the frames are simple and uncluttered, with even the most dramatic scenes evoking a sense of visual harmony. The Makioka Sisters is a film of primal visual pleasures, and the transfer ranks as another fine effort by Criterion.

The track is available only in the original mono, and it’s well balanced and appropriately spartan, as The Makioka Sisters is a story of respectful silences, hushed whispers and subtle subterfuges. The score, by composers Shinnosuke Okawa and Toshyuki Watanabe, is synthesizer driven and seems a bit out of place by today’s aesthetics. However, such was the style in the early 1980s as the influence of Vangelis reached far and wide. But Ichikawa inserts the music sparingly, so there is no major distraction.

The trailer comprises the disc’s sole extra, and it’s an accurate condensation of film’s feel and tone, if a trifle over dramatic in spots. It too is a new transfer and looks quite sharp and clean.

A Booklet Featuring an Essay by Film Scholar Audie Bock

This in-case pamphlet is an attractive 16 pages; complete with film stills, cast and crew credits and an in depth article entitled Of Love and Money by Japanese cinema expert Audie Bock. Bock draws convincing parallels between The Makioka Sisters and the American classic Gone with the Wind and, indeed, the films share a number of thematic commonalties. This essay will greatly add to one’s understanding of Japanese society in the early 20th century, and is recommended reading.

The feudal Japanese ideal of life governed by ritual and cold formality no longer provides a functional template as the nation grudgingly shifts into modernity. The Makiokas continue to adhere to traditions that have become quaint anachronisms, just like their sumptuous kimonos. And, like the generation of young men seduced by Japan’s cavalier militarism, the Makioka family must learn that honor is not an inflexible concept, and its blind pursuit has destructive consequences. They may be financially well heeled, but their long term survival as a family will depend on philosophical revisions and nimble responses to the volatile market of changing ideas. Ichikawa’s sensitive and beautiful film captures a pivotal moment in Japan’s sociological history, with a unique elegance perfectly suited to this material. While The Makioka Sisters consume themselves with trivial appearances, an express train to the future threatens to leave them in the acrid dust of a dynamic new world.