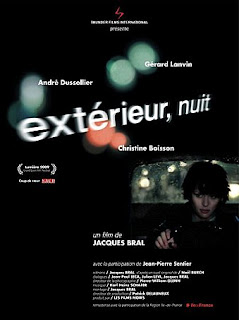 One of the great things about Dish Network is the access to international television, particularly their package of French programming. Nestled amid TV5’s comedies and newsmagazines are some real cinematic gems. Yeah, you’ll sit through a few stinkers in the process of unearthing them, but the obscure finds make the effort worthwhile. One such film is Extérieur, nuit, a murky existentialist drama about three aimless, drifting lives in the unromantic Paris of 1980. 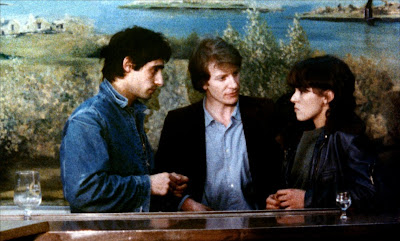 Written and directed by Jacques Bral, a low profile filmmaker with an impressive resume – he wrote and produced Street of No Return, Sam Fuller’s last feature in 1989 - Extérieur, nuit combines the thematics of Jules et Jim with the atmospherics of Taxi Driver. A successful studio musician named Leo (Gerard Lanvin) forsakes his comfortable career to return to the rough, smoky jazz clubs of la rive gauche, where gigs and paychecks are uncertain at best. Leo shows up, saxophone and luggage in tow, at the bohemian doorstep of Bony (the impossibly young and dashing Andre Dussollier), an old friend from the hippie days, who now spends most of his time staring into space in a forlorn effort to become a famous novelist. 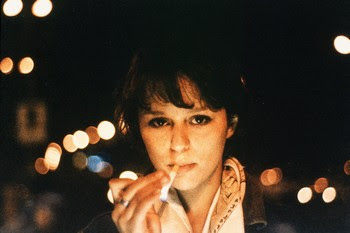 For a while, the two pals engage in what 30ish bachelors do best - trading sarcastic comments while drinking to oblivion in Paris’ wealth of neighborhood bars. One cold, damp night, Leo staggers into a cab driven by a mysterious woman of glistening liquid eyes and smoldering sensuality (Christine Boisson), who has discovered inventive ways of making chauffeuring profitable. The seductive Cora lives much as an over-age street urchin and her free spirited contours bewitch Leo into tender feelings he neither wants nor understands. But eventually, his passions for Cora are shared by the bemused Bony, and the stage is set for a thorough testing of the concepts of free love and open relationships. 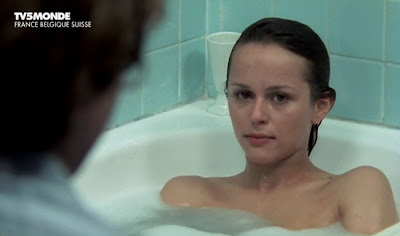 Shot largely at night, the film is a celebration – albeit a brooding, at times painful one – of the possibilities of young adulthood in a time of aggressive sexuality and changing ideas of romance. Cora and Leo enter into a tortured form of courtship, as each party alternately asserts notions of love and independence; confusing terms that had little meaning in a sophisticated world that no longer valued monogomy. When Leo raises the thought of marriage as a way out of their shared misery, both he and Cora bristle at the idea of suburbs and children, and a bright light glares on the preposterousness of their love. 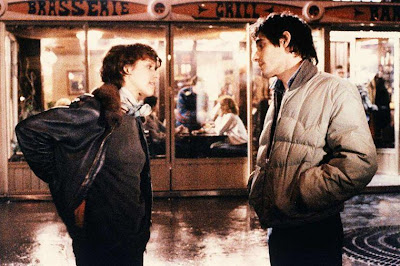 The acting in Extérieur, nuit is consistently wonderful, featuring a cast that has gone on to long and successful careers in the industry. Lanvin, who has become ruggedly handsome in his middle years and now largely plays cops and gangsters, comes off here as a sort of cuddly Robert DeNiro; a young man rife with angst and alienation but ultimately warm and empathetic. Christine Boisson’s notorious first screen appearance was as an oversexed teenager masturbating to a photo of Paul Newman in the moderately kinky classic Emmanuelle, but here she’s all business, honing a sharp edge of sexual and emotional danger that allows the narrative to cut through the lost meanderings of the male protagonists. And there’s the great Andre Dussollier, as our eyes, ears and heart, who shows an early mastery of the subtle physical timing that made him an international star. 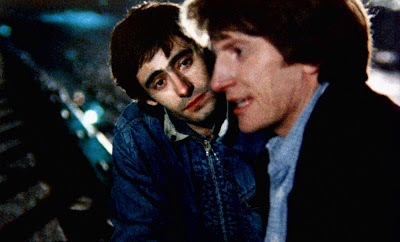 Extérieur, nuit has yet to be released in North America on DVD, but that will likely change as the film has undergone a re-discovery in recent years. In 2009, it was prominently featured at the Lyon Film Festival and in 2010 it was released for a theatrical run throughout France. And director Bral is back in the saddle again, currently filming a new drama called Le Noir (Te) Vous Va Si Bien in Paris. 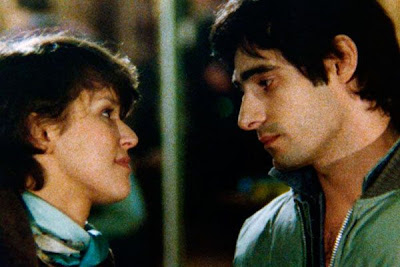 Despite its dark and bittersweet tonality, Extérieur, nuit almost seems like innocent nostalgia today. Hidden within its coarse folds is a world of thoughtful pauses and reflective self-evaluation; a world where people didn’t spend every spare moment fiddling with cell phones and telling Facebook they’d suffered hang nail. It was a world where idle navel gazing over a glass of scotch, neat, was not only tolerated, but encouraged. And following one’s heart - no matter how wrong-headed or dreadful the result - was infinitely more important than following Twitter.
at June 13, 2014

Parfait! A long, long time ago I saw this very romantic film and loved it. Your perfect review makes me want to see it again. Thanks.

Yet again, you inform! I will make a point of tracking this one down - sounds just ma tasse de the. (Thanks for your kind wishes over on my blog, too!)