This terrific movie truly has stood the test of time, as fresh and startling a masterpiece today as it was 40 yrs ago. And the DVD, with the director John Huston's intended "golden haze" restored, is sublime. The film ran for only a week in its original production before Warner Brothers recalled it and restored it to Technicolor. In the version Huston made, the production bathes every frame in a golden haze, lending to the atmosphere a sense of humid morbidity. REFLECTIONS IN A GOLDEN EYE is a film about desperation, unendurable repression, careless, selfish dalliance set against dissipating military dignity, dark sexual urges and incipient rage. These elements emerge in a brooding, suspenseful story adapted from a Carson McCullers novel, which begins, “There is a fort in the south where a few years ago a murder was committed…” 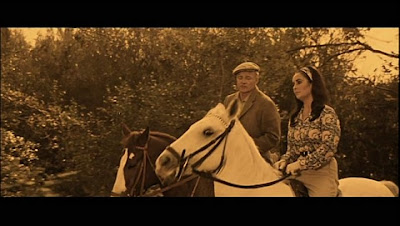 REFLECTIONS is set in an anachronistic army base somewhere in the south. The writing of this psychological melodrama, a study of human hell, is subtle and compelling; every scene is rich with symbolism accessible to the thoughtful viewer without being cloying, simplistic or pat. The late Elizabeth Taylor plays Leonora, the spoiled and randy wife of tortured Army Major Weldon Penderton (Marlon Brando). Leonora is a fascinating character who alternates between coy and charmingly manipulative to incisive and sadistic. Taylor never steps over the line in her performance, she never “hogs the stage”, so to speak. Major Penderton lives a life of self-controlled, quiet desperation as he struggles to keep his aging body from going to seed, while his mind is assaulted by unwanted sexual awareness. We see him becoming ineffectual with the men he lectures and commands. He begins to preen in front of the mirror. Weldon later assesses his predicament with this observation: “Any fulfillment obtained at the expense of normality is wrong…and should not be allowed to bring happiness. In short, it’s better, because it’s morally honorable, for the square peg to keep scraping about in a round hole, rather than to discover and use the unorthodox one that would fit it.” What Weldon goes through shortly before the murder is psychologically terrifying, and a scene wherein Williams enters the house as Weldon smooths his hair in anticipation upstairs is shattering. This is a movie that starts with a low grrrr, and ends with an agonized roar. 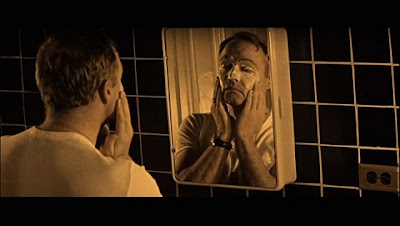 Marlon Brando’s performance is powerful, maybe his best ever, but the whole cast is superb. Also worthy of note is Zorro David, who plays the hilarious, intelligent and engaging Anacleto, the Filipino house boy/confident to neurotic Alison, affectingly played by Julie Harris. Alison is married to a not-too-bright Colonel Morris Langdon, played perfectly low-key and slightly dense by Brian Keith. He takes horseback rides with Leonora, occasionally indulging in a little pleasurable diversion with the wife of his subordinate. This film simmers with sexual tension - even the horses were loaded with it - and Robert Forster, who plays the enigmatic catalyst, Williams, had no lines of consequence at all during the whole movie, although he is central to all the action and remains a mysterious, brooding character to the end, subtly insinuating and disrespectful even to his desultory salutes. The movie is full of wonderful little details, like a fine stallion eating raspberries, as his mistress frolics in the shrubbery, or when Leonora takes off all her clothes in the living room, to challenge her prissy husband. She then delivers to her horrified husband perhaps the most unexpected line in the whole movie: Son, have you ever been collared…and dragged out into the street and thrashed by a naked woman? 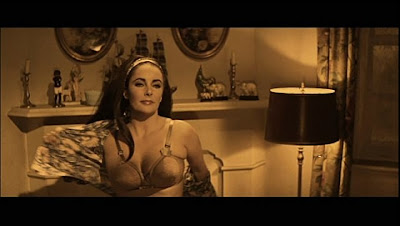 A notable aspect of this work is that each of the very diverse characters is given equal weight and attention by the director. None prevailed as the "star", even though Elizabeth Taylor is given top billing, and each character is treated with keen, non-judgmental interest. Unusual to see Liz so content just to be the ditzy, self-absorbed character she plays...that, and nothing more. 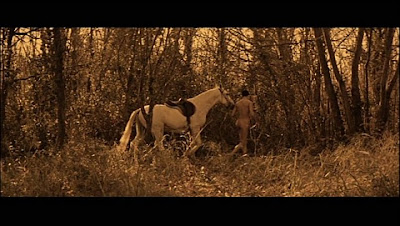 Special Features on this DVD offers a “making of” with “vintage behind the scenes footage” well worth a look. We can see John Huston at work, and how intensely concentrated the actors are, especially, perhaps, Elizabeth Taylor, in wanting to please him. Movie and Special Features: highly recommended.
Reviewed by Shu Zin
at March 27, 2011

Excellent review! Sounds like a fabulous movie! Brian Keith in a movie with Brando and Taylor? Cool.